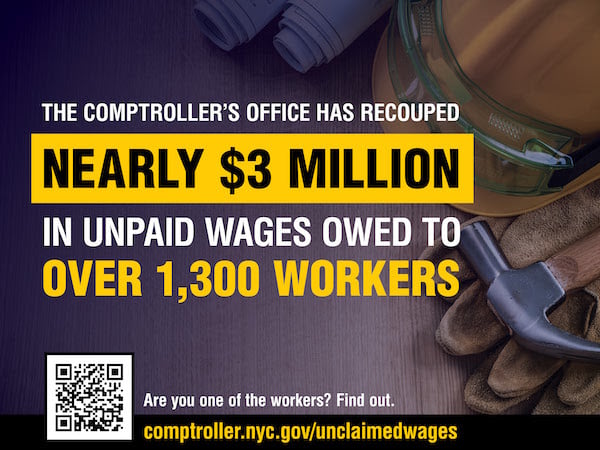 At a time when many Latino families in the Big Apple continue to suffer the impact of the financial crisis left by the COVID-19 pandemic, the New York City Comptroller’s Office has just announced good news for 1,300 workers who worked for companies or projects financed by the City: Almost $3 million are ready to be delivered to them.

This was revealed by the Labor Law Office of that municipal agency after announcing that they could recover unpaid wages, with interest, owed to 1,300 workers whose names appear on a list disclosed by that entity and to whom they are seeking to deliver the money.

New York City Comptroller Brad Lander said many workers who own those wages might not even know they are entitled to receive them, as some worked through City contractors, unaware there are higher prevailing wage and benefit rates on Big Apple public works projects than they were paid.

“Hardworking New Yorkers whose employers ripped them off deserve every penny they are owed. But many workers who were cheated out of City contracts may not know that the Comptroller’s office fought to recover their wages and is ready to cut them a check,” Lander said.

The public official reaffirmed his office’s commitment to watch over and fight for the protection and justice of workers whose rights are violated and asked all those who know the workers on the list to pass the word to them.

“Every week is Labor Rights Week at the Comptroller’s Office, but this week you can help us by spreading the word,” the Comptroller said. “The workers who build our schools, guard our offices and protect our buildings deserve to be paid prevailing wages, and we will continue to fight to ensure they are.”

Among the jobs where that wage schedule applies on City projects are public school renovation positions or construction services contracts, security guards, and custodial work.

“When companies do not pay prevailing wages, the Comptroller’s Office enforces the law to ensure that workers receive what they are owed,” added the New York City Office.

In the specific case of the 1,300 workers being sought for the money owed, the Comptroller’s Office explained that according to recent and past agreements, they are owed $2.8 million. Here you can consult the list and see if you are one of these workers.

And while some of the workers are owed a few hundred dollars, there are other cases where the figures are quite large such as checks of $86,000.

“Workers who were employed at City-funded workplaces such as public schools, subway stations, City streets, and parks and believe that our office has collected unpaid prevailing wages from their employers should call the Comptroller’s hotline at (212) 669-4443,” urged Comptroller Brad Lander’s Office.

They also noted that they could send mail or questions, email [email protected] or check the Comptroller’s Office’s unclaimed wages website.

Josiel Estrella, the spokeswoman for the New York City Comptroller’s Office, warned that the main intention of that entity is to deliver the recovered wages to the 1,300 identified workers and added that their immigration status does not matter.

“We want these workers, many of them immigrants and many of them Hispanics, to deserve to receive the money we recovered for them. We desire to give it to them because we know it will do them a lot of good, and we make it clear that there is nothing to be afraid of. We are not going to ask about their immigration status, and even if some of them are no longer here but have returned to countries like Mexico, we will look for a way to get the money to them there,” said the Comptroller’s Office official.

“If they are in your country, you can still claim, if you are in New York or another city, contact us, and we will look for a way to give you that check. Right now, what matters to us is to give you what belongs to you, and we want to give it to you as soon as possible,” said Estrella.

As part of the training and education on labor rights for more workers in New York, the Comptroller’s Office, which in the last decade has been able to recover more than $22 million for employees who were cheated out of their wages, constantly advances workshops, hand in hand with community organizations, such as Mixteca, La Colmena, N.I.C.E, Catholic Charities, St. Jerome Hands, as well as with the Mexican Consulate.

“Know Your Rights” materials are available on the Comptroller’s website, in English, and many other languages,” concluded the Comptroller’s Office, noting that amid its audits, it has been able to disqualify more than 60 contractors who took advantage of workers.