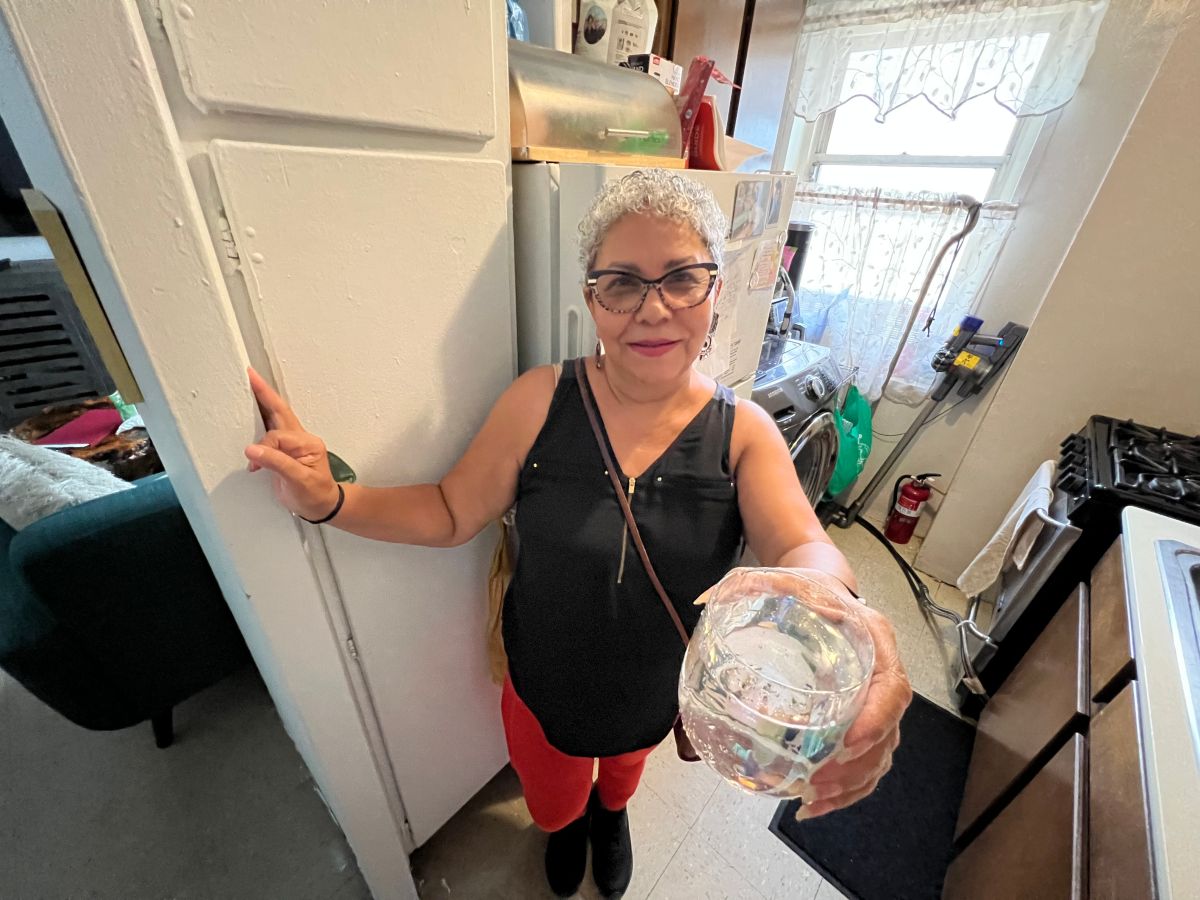 The tenants of the projects Jacob Riis public housingin Lower Manhattan, are “terrified”. That is the word they use to describe how they feel, after a few days ago, it was confirmed that traces of arsenic were found in the water of that housing complex in NYCHA, and then the authorities retracted, assuring that the initial report was an error by the laboratory that analyzed the liquid.

Even though his own Mayor Eric Adams visited the Jacob Riis Apartments, where he even drank a glass of water, stating that there is nothing to fear and that it is safe to drink the liquid, NYCHA residents not only do not believe him. Not only do they not trust the calm part of the municipal president, but this Monday they announced a lawsuit against the City and against NYCHA for $10 million dollars in damages.

That’s how he revealed it attorney sanford rubensteinduring a demonstration that took place in front of the Jacob Riis Projects, who explained that he represents 35 tenants who are suffering the ravages of double information about the quality of the water there, which has generated a lot of fear.

The lawyer, who urged other residents to join the lawsuit, clarified that it is not necessary to suffer physical and health damages to claim damages, since the fear that was irresponsibly created about the quality of the water has already generated alarm.

“While it remains murky as to the presence of dangerous chemicals in the water, residents’ fear of getting sick is also cause for action for damages,” the attorney emphasized.

And it is that mistrust already reigns among the tenants of that NYCHA housing complex, who confessed that since the information about arsenic in the water emerged and then with the City’s admission of error, they have not wanted to risk drinking the liquid.

with a face of anguish, Yesenia Grillwho claims to have lived 50 years of his life in Jacob Riis, asked the Adams Administration not to play with the peace and security of New York’s poor tenants, warning that in order for him to believe again that water is consumable, requires multiple tests with different agencies to ensure that there is no risk.

“The truth, I feel bad. I’m desperate, because I don’t know what to believe anymore. These people always say things and leave you full of fear. It is not enough that one day they say that such a big thing was a laboratory error. They have to be serious.” commented the Puerto Rican.

The Puerto Rican, who lives in her apartment with her mother and her daughter, said she did not believe that the water is as clean and clear as after mayor adams He mentioned, and even expressed feeling that several discomforts that he has had in his health for years, could be caused by contaminated water, for which he demanded more tests.

“My hair is falling out a lot, and I have constant headaches and feel like throwing up. I haven’t known why that is, but now with this water thing, I’m thinking it might be because of that. We are all sick and that is surely why,” said the mother of the family, who also asked that a special group be created so that NYCHA residents tests are performed to rule out arsenic damage.

The tenant took the opportunity to demand from the City that while there is a final report that is “really reliable”, the Adams Administration reimburse them what they have spent on buying water and food, because due to fear, they have not been able to prepare food at home.

“It is as if we poor people could not say anything and our lives were not worth it. That hurts and more so seeing that there are many elderly people here and they need help,” added the woman.

A similar position has Dinorah Diazwho confessed that his fear is such that he no longer even dares to brush his teeth with the water from the taps in his apartment.

“I’m stressed, and more so because I just fought cancer and I can’t be stressed. We can’t use the water here for bathing, brushing our teeth, or cooking. My daughter has had to buy food from me, because I live on social security and it is not enough,” said the resident of Jacob Riis. “I feel that we are being discriminated against for being Latino and blackthis is something that must be said, because if this happened in white neighborhoods, they would immediately carry out many tests and help them, because it is as if their lives were worth more”.

Reverend Kevin McCallwho fights for social justice rights, joined the protest, and criticized Mayor Adams for not taking action against the laboratory that issued the wrong results, while demanding that tests be carried out or water quality detectors be installed in all NYCHA apartments so tenants feel safe consuming the liquid.

“How the hell can we trust the mayor after this happened. We don’t understand why the lab that tested the water was from Chicago and not New York and why no action has been taken against that location. We demand an investigation from the environmental protection agency and also from the FBI,” said the reverend.

“We don’t know who to believe. These tenants are scared. We need transparency, because this problem cannot be fixed by saying ‘it was a mistake’. Trust must be regained and they must stop treating these tenants like second-class citizens.”

Nor NYCHA nor the City referred to the demand and the requirement that in-depth water quality tests be carried out in all NYCHA apartmentsbut Mayor Adams issued a statement in which he insisted that the water is safe and consumption is not at risk.

“The New York City Department of Health and Mental Hygiene reviewed the final contaminant test results and found the water to be within the EPA drinking water quality standard limits. We can say with confidence that the water in Riis Houses it is and has been free of any detectable amount of arsenic since the initial tests began in August and it meets the standards,” said the local president, adding that he will return the money that the tenants have spent on water.

“Nor NYCHA nor will any other City agency test the water through Environmental Monitoring and Technologies any longer, and the City intends to pursue all available legal options on behalf of Riis Houses residents and will look into how we can reimburse residents. for the expenses incurred during the last week, Adams added. “We want to make sure of the quality of the water. The water is fine. That’s why we told NYCHA residents that it’s okay to drink and bathe in the water.”

Dolores Rodrigueza resident of another NYCHA complex in the Bronx, said she felt concerned after what happened in Manhattan and also called for an exhaustive inspection of all Public Housing buildings.

“When I hear the Mayor say that the water is safe in NYCHA, it scares me and I don’t know whether to drink the water or not, and those moments when the authorities said after the attack on the Twin towers that it was It was safe to breathe because the air was clean, and then many workers began to get sick and die,” said the tenant. “I only hope that this is not such a case, and that they take action to make sure that we are not at risk; may they be clear as water”.