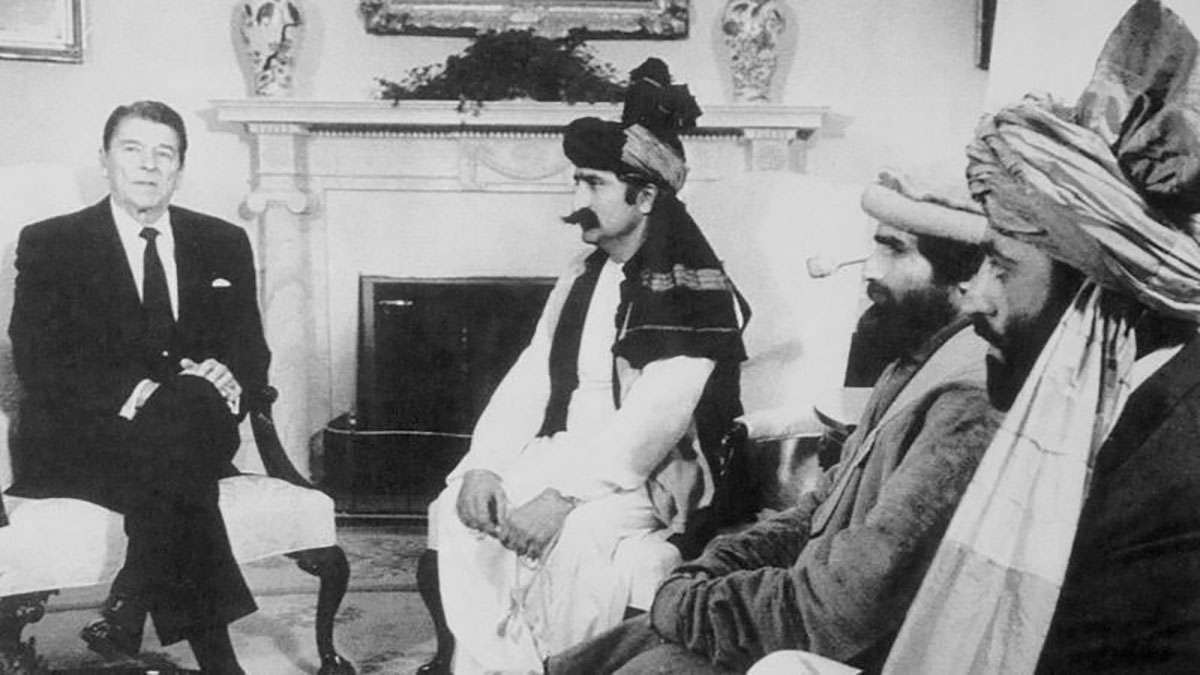 In the United States they were called “freedom fighters.”

But calling them Islamic fundamentalist guerrillas would have been more appropriate.

Local guerrilla groups resisted the Soviet invasion of Afghanistan for years with the support of Washington, which supplied them with weapons and money to thwart the objectives of the rival superpower, the USSR.

According to declassified documents, journalistic investigations and testimonies of the protagonists years later, Washington strategists wanted the Soviet Union to be trapped in Afghanistan in a “quagmire” that consumed lives, money and resources like the one the United States had suffered years earlier in the Vietnam War.

It was called “Operation Cyclone” and the press of the time described it as the “largest covert operation in the history of the CIA.”

In 1996, just 8 years after the start of the withdrawal of Soviet troops, the Taliban conquered Kabul and imposed in Afghanistan an Islamic fundamentalist regime condemned worldwide for his human rights violations.

Did US aid contribute to your victory?

How it all started

In the spring of 1979, more than 30,000 USSR military personnel, supported by planes and tanks, began their deployment to Afghanistan in support of the “revolutionary” government in Kabul.

A year earlier, the so-called Saur Revolution had established in Afghanistan a socialist state that he was facing a growing resistance from local Islamist militias, made up of mujahideen, as those who fight in the “holy war” are called according to Islamic tradition.

Moscow wanted to shore up the Afghan socialist state and the pro-Soviet government of President Babrak Karmal, which faced increasingly virulent armed resistance from the Mujahideen.

Robert Crews, a historian specialized in Afghanistan at Stanford University, told BBC Mundo that “America was caught off guard, despite the fact that it had been competing with the USSR for construction and infrastructure projects on Afghan soil since the 1950s. “

In that context, Zbigniew Brzezinski, National Security Adviser, and other advisers persuaded President Jimmy Carter that a covert operation to equip and arm the Afghan insurgency was a good idea.

Thus began one of the typical conflicts of the Cold War, in which the United States and the Soviet Union competed for world domination, but never directly faced each other on the battlefield, but by supporting some of the contenders in wars. in third countries. In English it is known as “proxy wars”.

Murad Shishani, an expert on jihadist militias at the BBC, explains that in Afghanistan “the United States supported the jihad to defeat the Soviet enemy.”

How Operation Cyclone was carried out

At first, Operation Cyclone only supplied the rebels with old Soviet-made weaponry, such as AK-47 rifles, and limited itself to recruiting volunteer fighters and financial contributions from various Arab countries.

“That way, Washington could deny their involvement,” Crews says.

Saudi Arabia was one of the most active, although the Egypt of Anwar el-Sadat and others contributed to the pro-mujahideen effort.

The plan required the collaboration of Pakistan’s intelligence services., from where many of the jihadist groups acted.

An example of how it operated was given by US Congressman Hub R. Reese, who revealed in 1988 that he had delivered 700 mules from Tennessee to a military base in Kentucky to be shipped to Pakistan.

An increasingly powerful lobby in Washington called for increased aid to the Mujahideen, whose leaders complained that the arms surrendered were not enough to stop the Soviets.

In 1984 Congress passed a resolution on Afghanistan that stated that “it would be indefensible to provide freedom fighters with enough help just to fight and die, and not to advance the cause of freedom.”

Reagan even received a delegation of jihadist leaders in the Oval Office and in his 1986 State of the Union address he sent a message to the Afghan rebels: “Notan alone, freedom fighters. USA lwill support you“.

But Reagan did something much more important. He approved the delivery of units of the Stinger portable missile launcher to the guerrillas, a decision that would prove crucial.

Hidden in the rugged Afghan mountains, the Mujahideen were then able to shoot down Soviet helicopters and the balance of forces on the ground changed rapidly.

Democratic Senator Charles Wilson, one of the most active advocates for Washington’s greater involvement in Afghanistan, declared that Congressmen were “in awe of the Stinger’s success.”

In September 1988, after 9 years of intervention, the Soviet premier, Mikhail Gorbachev, ordered the withdrawal of Soviet forces from Afghanistan, which was mired in a civil war between the various factions of the country and a government that, without the support of the USSR, it did not take long to fall.

Did the Taliban benefit from US support?

“There is a conspiracy theory that states that the United States supported the Taliban movement to benefit from what came after,” says Murad Shishani. “But that is not the case”

Actually, the Taliban did not appear until 1994 in the southern city of Kandahar, where they soon gained popularity presenting themselves as a kind of student-warriors whose ranks were nurtured by young people of the Pashtun ethnic group who were trained in Koranic schools.

“When the Taliban arose, the USSR had already fallen, but it is true that some of the leaders who founded it they were among the warlords who received American aid in the war against the USSR, ”says Shishani.

Defeating the USSR was the great objective of the United States then, and as Shishani recalls, “the term jihadist did not have the negative connotations that it has acquired later”, due to the bloody action of groups such as al-Qaeda and the Islamic State.

“The United States put weapons in Afghanistan, but in reality many countries did“, He stresses.

Robert Crews recalls that when the Taliban appeared in Kandahar it presented itself as “a pure new force that wanted to combat all of the above” and indicates that its original leaders were not among the main recipients of US aid.

However, the Taliban’s success was based in part on their promises to restore order and establish clean and traditional Islam, and they benefited from a climate in which, in Crews’s words, “the help of the United States and the victory against the USSR they had contributed to create a kind of jihadist utopia“.

What balance is made in the United States

The withdrawal from Afghanistan was seen as the preamble to the fall of the USSR and the end of the Cold War, and in the 1990s the United States experienced the height of its power as an undisputed great power until the subsequent emergence of China.

Robert Gates, a former US Secretary of Defense and a CIA official when Operation Cyclone was conceived, wrote a book years later about the presidents who “won the Cold War.”

But if the Cold War was over, the Afghan civil war continued to fill with the dead a country now far from the priorities of American strategists.

“In lhe Afghan Civil War Washington opted for silence, also with regard to the human rights violations of some of the groups of mujahideen that he had supported, ”says Crews.

The expert compares the support for the anti-Soviet resistance in Afghanistan with that given to other armed movements that fought against declared leftist governments in other countries at the same time, such as the Contra that fought against the Sandinista Front in Nicaragua.

In his opinion, this policy reveals that “for the elites of Washington the populations of other countries are only resources for the achievement of their interests.”

Those who designed Operation Cyclone never showed any regrets. Former councilor Brzezinski made it clear in an interview with the French weekly “Le Nouvel Observateur”.

When asked if he regretted supporting the jihadists, he replied with another question: “What is most important in world history? The Taliban or the collapse of the Soviet empire?