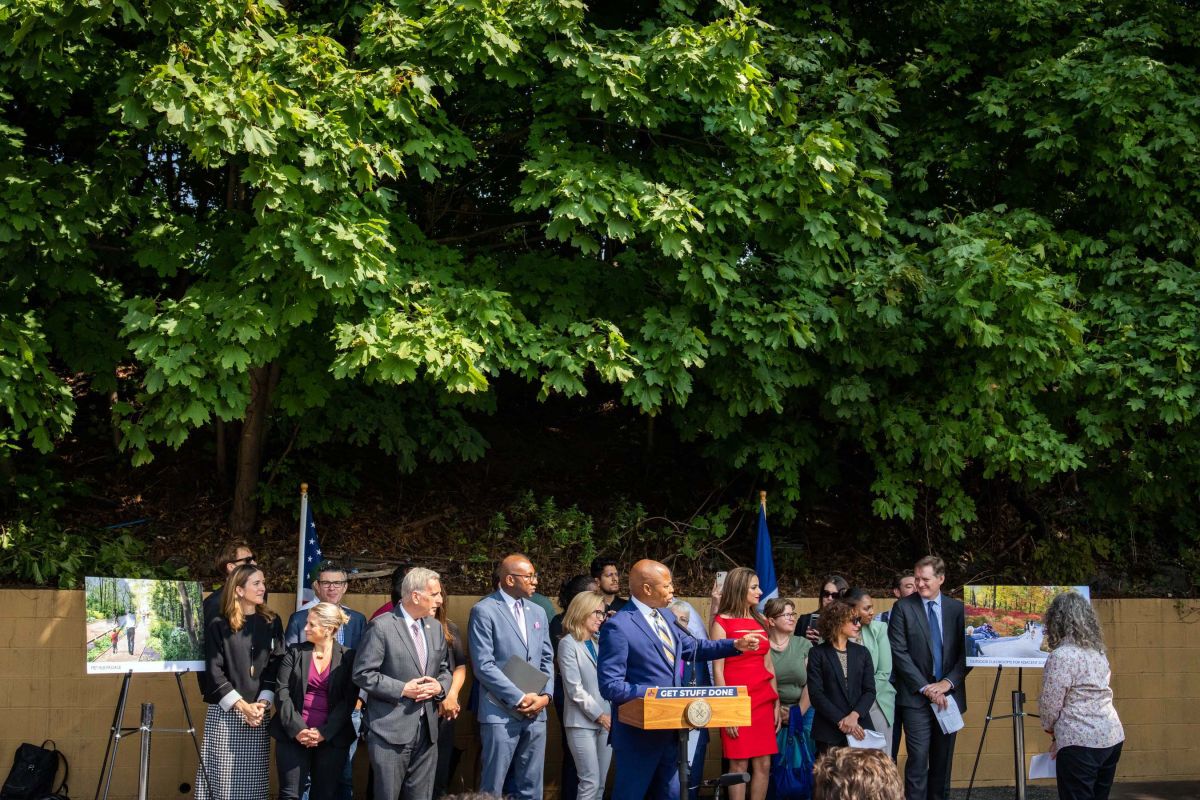 A few days ago, Mayor Eric Adams announced with great fanfare that Queens County would soon have a park similar to Manhattan’s famous Highline, which will be built on 3.5 miles of old Long Island Rail Road in neighborhoods such as Forest Hills, Rego Park, Glendale and Woodhaven.

The President officially presented the creation of the QueensWay, a first phase of which the City will invest $35 million to design and construct five acres with 0.7 miles of greenways.

The initiative, which neighborhood organizations have promoted since 2011, which denounces the disuse of those Long Island Rail Road (LIRR) lanes that closed 60 years ago, was welcomed by those who dream of having more green spaces in that part of the city, such as Josue Mendoza, a Rego Park neighbor.

“I am glad to hear that finally, the City paid attention to us, and soon they will start works here to take advantage of a space that many times has become a dirty area full of garbage or even land for people to use drugs,” said the Colombian.

Mayor Adams assured that the project would provide residents of that part of Queens, where an estimated 323,000 people live, with new open spaces, better access to recreational services, outdoor education opportunities for students, and a transportation corridor that connects to schools, businesses, and ten bus lines.

“New York is a five-county city, and each county deserves high-quality park space. That’s exactly what we are delivering with this $35 million investment in one of our vital neighborhoods in Queens,” said the local leader, explaining that the New York City Economic Development Corporation (NYCEDC) will manage the construction of the “Met Hub” in partnership with the Department of Parks and Recreation. “Phase one of QueensWay will convert abandoned railroad tracks used as a landfill into a linear park that will make this community safer, healthier, greener, and more prosperous.”

Travis Terry, president of the Friends of the QueensWay, called Mayor Adams’ announcement “a historic and extraordinary moment” and assured that it would improve the quality of life for Queens residents.

“After decades of community advocacy, the work begins to transform these miles of greenway into a space that our communities can enjoy,” the community leader said. “When the QueensWay is completed, community organizations and schools will be enhanced; neighborhoods will be reconnected; social and cultural programs will emerge; local businesses will get a much-needed boost; environmental conditions will improve air quality and reduce flooding; and children, seniors, and residents will finally have a safe and beautiful place to bike, jog or take a stroll.”

Tom Grech, president and CEO of the Queens Chamber of Commerce, stressed that the impact the new park will have on his county would not only be on an environmental level, but he warned that it would be an economic boost for that part of the Big Apple.

“This transformative project will create much-needed green space in the heart of our county, making Queens an even better place to live, work, raise a family and start a business. We thank Mayor Adams for funding this important project, which will benefit the local business community and residents alike,” said Grech.

Queens Councilwoman Lynn Schulman, who is also chair of the City Council’s Health Committee, applauded the Mayor’s decision to begin work on a park on the abandoned rails, in which the legislative body will invest $2.5 million, and emphasized that it is a great move to help save the planet.

“A linear park in Forest Hills, Queens, is a big step toward meeting this challenge. For many of the 2.3 million people living in Queens, access to public parks and open space is limited and, in many cases, difficult and dangerous to access on foot and by bicycle,” said the political leader. “The QueensWay will provide much-needed green space while acting as a main artery for the borough, connecting six distinct neighborhoods and providing safe and easy alternative transportation to 12 schools, seven subway lines, and a commuter line.”

But not everyone in the surrounding neighborhoods where the linear park will be built is so happy.

The bone of contention has to do with the issue of transportation since the happiness on the faces of those who for years promoted that the 3.5 miles of rails be used to promote an ecological project contrasts with those who asked that they be used to extend the subway lines; much of that area are transportation deserts, and in several areas, the train stations are as far away as a half-hour walk.

This is the daily plight of Fanny Lazara, who lives at 69 Rego Park Avenue, a dozen blocks from the nearest subway station, and who said she was upset with the announcement of the new park.

“I am an old woman. I’ve lived here for years, and we’ve been begging to have a train put there, so we don’t have to suffer the lack of transportation. I think it’s the last straw that they don’t listen to us and come out with the little joke that they will put plants and bushes instead of a subway,” said the Panamanian woman.

Maria Pilona, who has lived in Rego Park for several years, did not look favorably on the linear park initiative either and demanded that the City of New York reverse the plans and convene community meetings.

“That space should be for a subway, and they can do park stuff there too. Every day I have to walk 20 minutes or more to get to the train station, and I already see enough green space around here. Besides, these decisions were made without consulting the neighbors“, said the Guatemalan woman. said the Guatemalan woman. “I hope the Mayor reviews what he is doing and considers us because it is time to improve transportation around here. The buses are always late, too.

Claudia Ortega, another resident of Forest Hills, the neighborhood adjacent to Rego Park, denied that the bus service did not work well and said that although she understands that older adults would like better train service, she said that due to the high number of children in that part of Queens, a linear park is a great idea.

“I think we have good bus routes, at least around these parts, and there are few parks not only to take the kids but to be us and breathe fresh air. I fully support the idea of a park,” commented the mother.

Community members had hoped that the City and State would listen to their cry, which was formalized through the QueensLink group, which has advocated for years to return the abandoned rail yard to its original use. The dream was for neighborhoods with public transit options limited to buses or public cars to have a subway, extending the M train from Queens Boulevard to Liberty Avenue. It would merge with the A lines to Rockaway and promote green space.

“QueensLink and its supporters are dismayed to learn of the secret deal made to block transit equity for Queens residents by converting the former Rockaway Beach Branch rail line into a park,” that group said in a statement. “For years, QueensLink has asked that this right-of-way, owned by the City, be used for both transit and park space. Construction of the park, known as QueensWay, would block any future transit use on this line and deprive southern Queens residents of a faster commute and less traffic while reducing pollution and carbon emissions.”

Columbian Tulio Bonilla, 62, added to that sense of frustration and called on the Mayor to reconsider his decision and create a plan that includes transit and green space.

“The City keeps getting its decisions wrong. Before they set out to make a park there, they should have consulted all of us neighbors, and they would see that what we need is a subway,” said the Forest Hills resident. “These park ideas are nice aesthetic things, but they don’t solve our needs. And if there are already rails and infrastructure, why don’t they just design a subway with green spaces? That was the right of things.”

Queens Borough President Donovan Richards Jr. himself, who supported the park plan, admitted that the area is behind on public transportation issues and stressed that while there is an urgent need to ensure that communities have access to open space, there is also a need to address inequity in mobility options.

“Queens has a demonstrated need for more extensive and accessible open space, and the QueensWay is uniquely positioned to meet those needs,” the politician said. “The QueensWay will promote recreational and cultural opportunities while connecting communities and facilitating alternatives to the car. Queens communities experience many glaring inequities.”

Danny Pearlstein, director of the ridership advocacy organization Riders Alliance, asserted that rather than a subway, in Queens County, the fastest way to improve public transportation is with better bus service.

Amid the differences, Mayor Adams did not rule out the possibility that the subway project could be built in the future. Still, without giving specific guidelines, he made it clear that for now, his priority on the abandoned rails will be to promote the first phase of the park.

The MTA (Metropolitan Transportation Authority) did not mention specific projects for future use of those rails for a subway. Still, its spokesman, Eugene Resnick, assured that “nothing in the City’s plan for the QueensWay will affect the MTA’s future transportation initiatives.”

The QueensWay in Facts and Figures