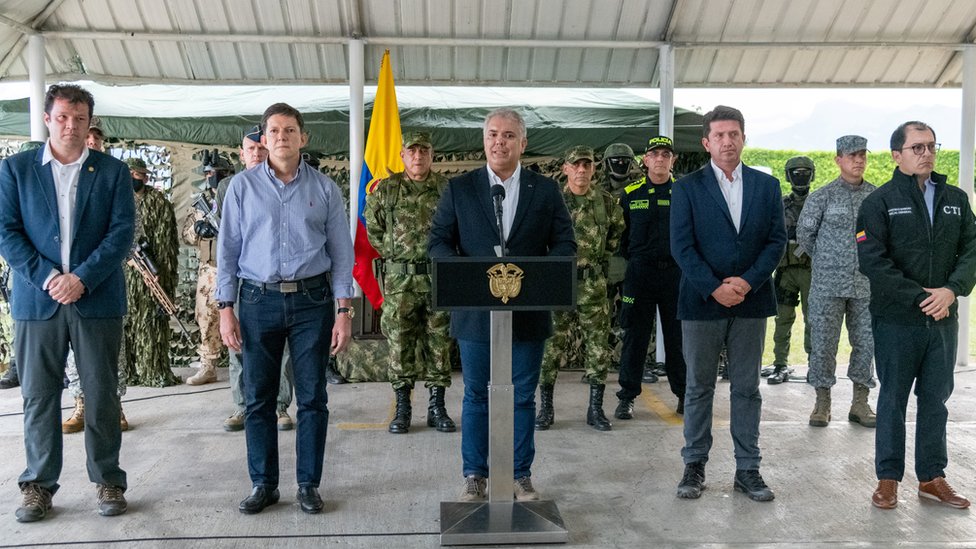 To capture the most wanted man in Colombia, 150 intelligence policemen, 500 members of the army, 22 helicopters, the cooperation of intelligence agencies from the United States and the United Kingdom, and a dead police officer were necessary.

Dairo Antonio Úsuga David, better known by his alias “Otoniel,” was apprehended on Saturday in a hut covered with a camouflage tent in Cerro de Yokí, near the town of Necoclí, department of Antioquia, in northwestern Colombia.

Two rewards were offered for his capture: US $ 800,000 of the government of Colombia and US $ 5 million from the US, who is now awaiting his extradition to be tried for drug trafficking offenses.

But Otoniel, 50, is not only a powerful drug trafficker, head of the dreaded Clan del Golfo, which today controls nearly 300 municipalities in the country (25% of the total), but is also perpetrator of massacres, displacements, kidnappings and accused of pedophilia.

While the government of Colombia celebrates his capture and President Iván Duque describes it as “the hardest blow that has been dealt to drug trafficking in this century in our country” and a blow that “marks the end of the Clan del Golfo”, emerge two questions:

Does the capture of Otoniel really mean the end of the Clan del Golfo, which is currently responsible for the export of cocaine from Colombia? Will his extradition bring justice for his thousands of victims?

“It is not so significant for drug trafficking”

“I believe that the government and the police authorities are right to carry out an operation that clearly shows an intelligence capacity, a monitoring capacity, a persistence in the fight against this criminal and his organization,” Sergio tells BBC Mundo. Guzmán, director of Colombia Risk Analysis, a security and political risk consultancy that operates in Colombia.

“The capture of the most wanted criminal in the country for the last 10 years is a success from all sides,” he adds.

But Guzmán does not believe that the capture of Otoniel necessarily means the end of the Gulf Clan and much less drug trafficking in Colombia.

“The drug market works in an international market where supply and demand play a determining role, where the price of cocaine, no matter how high, does not make consumers stop looking for it as a recreational and leisure drug and that this in turn feeds the supply in places where the State not only does not arrive, but does not provide sustainable alternatives that can compete with the future or the capital gains that the drug trafficking business does, ”explains Guzmán.

“From a purely economic point of view, Otoniel’s capture is not so significant for the effects it will have on drug trafficking as such ”.

The expert says that it would be “hopeful” if Otoniel collaborates with the authorities since he is able to dismantle a cartel, but it all depends on the incentives he receives. And for now “nothing suggests that it will.”

The end of the Gulf Clan?

Considered a large cartel, the Clan del Golfo was initially known as the Urabeños, for the Urabá region where it operates, although its tentacles extend to much of the country and beyond (members of the group have been captured in Brazil, Argentina, Peru, Spain and Honduras).

At its core has been a family clan, the Úsuga, to which not only Otoniel and Giovanni have belonged, but also several cousins ​​and other close relatives.

Otoniel took command of the Clan after the police killed his brother Juan de Dios in 2012.

“They became a very important link that ships drugs from Colombia mostly to Central and North America in partnership with the Mexican cartels that in certain parts of the country are controlling territory to the south, they are entering and entering Ecuador and that of course, let’s say, makes them responsible for a large part of the cocaine that leaves Colombia to the world “, He says.

Contrary to the optimistic statement of President Duque about the end of the criminal group, Colombian media reported this Sunday that the authorities already know of the possible replacements of Otoniel in the command of the Gulf Clan.

The name that sounds the most is Jesús Ávila Villadiego, alias Chiquito Malo, who has been at Otoniel’s side for 20 years and is in charge of the production and commercialization of cocaine for the Gulf Clan in some areas of Antioquia.

As in the case of Otoniel, against Chiquito Malo there is a red circular from Interpol and an extradition request from the United States.

“You have to remember that Otoniel is also the heir to (alias) Giovanni, who was his brother,” says Guzmán.

For her part, Elizabeth Dickinson, an analyst for Colombia at the International Crisis Group, a global conflict analysis organization, says that the two words she has heard the most from people living in the territories controlled by Otoniel are fear and anxiety.

“One thing that we have seen as a pattern, not only with this organization but in many organized crime and armed groups in Colombia, is that when there is a high-level capture, The new command feels that it is his turn to show that he is so strong, capable of handling the situation, and that in many cases implies a lot of violence ”, Dickinson tells BBC Mundo about the possible consequences of the capture and replacement of Otoniel.

“Selective assassinations, purges within the organization itself, perhaps violence against the public force. So it is really a very dangerous period in that sense, ”he adds.

“People are really terrified waiting for a new wave of violence. It’s as if this is going to reopen past struggles and more ruptures within the organization. “

Extradition to the US vs. Justice for victims

“Otoniel must be extradited as soon as possible. That process must be agile and once he fulfills his sentences for drug trafficking in the United States, he will have to answer for all his crimes in Colombia, “said President Iván Duque in an interview published this Saturday in El Tiempo.

However, the extradition of big drug lords from Colombia to the US has left the victims waiting for justice.

For Elizabeth Dickinson, extradition is a difficult case.

“Clearly, those who have the first right to justice are the Colombian victims and they should have it within a justice system in Colombia, but perhaps there is also some feeling that here there are no guarantees during a judicial process,” he explains.

“It may be that the threat of sending him to the US can also help to get a couple of information. Surely he [Otoniel] He does not want that, he does not want to spend his life in a prison in the US, so I imagine it is like a token in the game of what can be achieved with his capture ”.

Sergio Guzmán agrees that justice is not ensured for victims of crimes other than drug trafficking in Colombia.

“I believe that the victims of torture, of massacres, the murdered social leaders can breathe easy that this boss is not, let’s say, in the streets, but there will be no justice for them with an extradition, because the first priority of the United States is to try them for their crimes associated with trafficking“, it states.

“His other crimes already depend on the Colombian justice, which does not have a good report of attitude against crime and impunity that is also very worrying and less so for the victims who have suffered in the regions where Otoniel is famous for among many others. things, sexually abusing minors ”.

But, as Guzmán explains, it is not only the victims who are left waiting for justice for that son or that father who was murdered, abused, disappeared at the hands of the groups led by the big bosses. It is also the business of drug trafficking that, despite the thousands of people extradited to the US from Colombia each year, does not change.

“The great drug lords who have been extradited or have collaborated with judicial authorities in the United States and Colombia, such as Carlos Lehder, such as the Rodríguez Orejuela brothers, have not resulted in a significant change in the model or the fight against narcotics as such. ”.