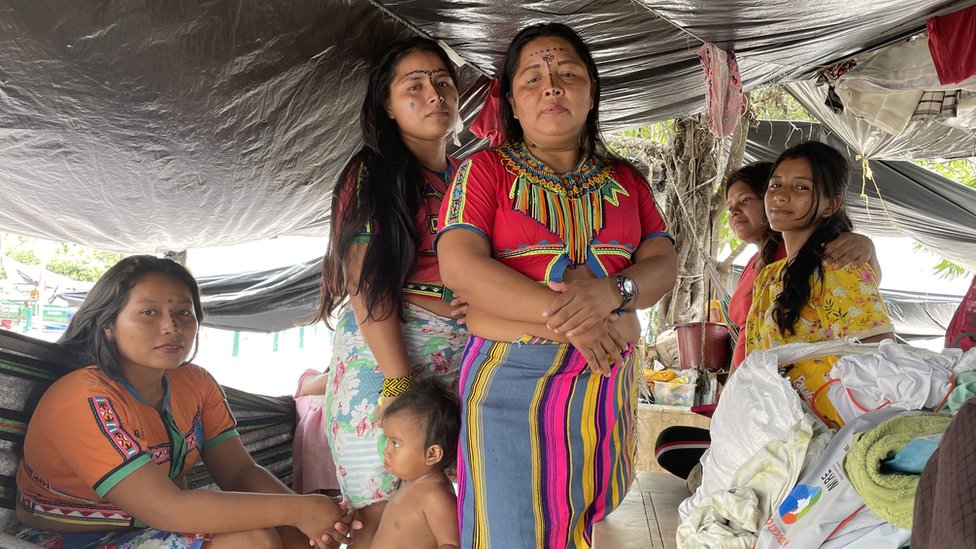 Canvas awnings supported by poles and poles occupy a public square in the city of Montería, in northern Colombia. An Embera indigenous community has lived under them since mid-April.

They fled the violence that broke out between rival armed groups in the rural area that lived many hours away on the banks of the Sinú River.

A barefoot Embera woman said she wanted to return but fears for her life and that of her family.

“We are here out of serious necessity,” says Margarita Pernía, 42, sitting next to her three adolescent daughters, dressed in indigenous clothes and with traditionally painted faces.

“They have weapons. After six in the afternoon we couldn’t go out, because even though we were on our land, they forbid it, ”says Pernía. “We lived in terror.”

Pernía explains that they had to flee because several armed groups began to take the control of the lands in their indigenous reservation, although he is not able to identify exactly who they were.

In Montería, members of the Embera community sleep on the floor on thin foam mattresses and wash in a nearby river, which they also use as a toilet.

“Here we have to put up with mosquitoes and hunger. Our children have fallen ill and some have died, ”says Favio Bailarín, 52, a spokesman for the Embera people and part of the group of 2,700 who fled.

This is a small example of the multiple forced displacements that take place every month in Colombia.

This November 24 marks the fifth anniversary of the entry into force of the peace agreement signed by the government and the Revolutionary Armed Forces of Colombia (FARC) in 2016.

But for many in that Andean nation, peace never came.

Other rebel or dissident groups and new illegal armed organizations that are dedicated to the production and trafficking of drugs and illegal gold mining have accessed the areas cleared by the demobilized FARC members and taken their control.

An overwhelming amount of These illicit activities occur on the ancestral lands of Afro-Colombian and indigenous communities.

During the first half of this year there were 102 incidents of mass displacement, in which a total of 44,290 people fled the violence towards urban areas, more secure.

“For many communities throughout Colombia, the promise of peace has proven to be a devastating disappointment,” said Juan Pappier, principal investigator for the NGO Human Rights Watch.

Another phenomenon that is increasing is the confinement of communities by armed groups.

“Illegal armed groups exercise control over local populations by restricting their freedom of movement. This is a ‘confinement’ that implies the imposition of curfews, checkpoints and not allowing the entry or exit of people from the community or allowing necessities to be brought into the area ”.

This was explained by Sánchez Garzoli, director for the Andes region of the Washington Office on Latin America (WOLA) research center.

The southwestern Pacific region, especially the department of Chocó, is the most affected. The United Nations indicated in a recent report that 96% of the people “confined” this year belong to indigenous or Afro-Colombian groups.

The majority dare not speak to local authorities nor with rights defenders or journalists for fear of reprisals.

Sánchez Garzoli says that confining these communities gives armed groups a military advantage over their rivals and guarantees that the local population will submit to their demands.

Young people and minors continue to be recruited into the ranks of illegal groups.

In a report published in September, the independent humanitarian analysis organization ACAPS projected an increase in forced recruitment, gender-based violence, mass displacement and massacres in the coming months in the departments of the Pacific coast of Colombia where “at least 10 armed groups are fighting for the territory ”.

According to the study, clashes between armed groups for territorial control increased the number of confinements, mass and individual displacements, and homicides in 2021, a trend that will likely continue.

The Pacific departments are key to the cultivation of coca – the basic ingredient of cocaine – whose production is also at an unprecedented level.

Armed groups are also re-planting landmines and other explosive devices to protect their coca fields, which frequently maim civilians and security forces.

Also read:  The reason why we are getting taller and having puberty sooner

A Colombian government spokesman told the BBC that they could not provide a direct answer to questions raised about the increase in violence in the country.

Across the public square in Montería, Ireña Domico Charras, 52, is sitting alone.

With care and the help of a pin, she threads small beads to make beads that she sells around the city. She is the local leader of the Embera community.

“They have killed one of our leaders in Sinú. I have received death threats and so has my husband, ”says Domenico Charras, while saying that her brother was murdered by the FARC and that she was displaced already three times before the peace agreement“.

“If you don’t do what they tell you, they kill you. We need the government to guarantee our safety before we can return. “