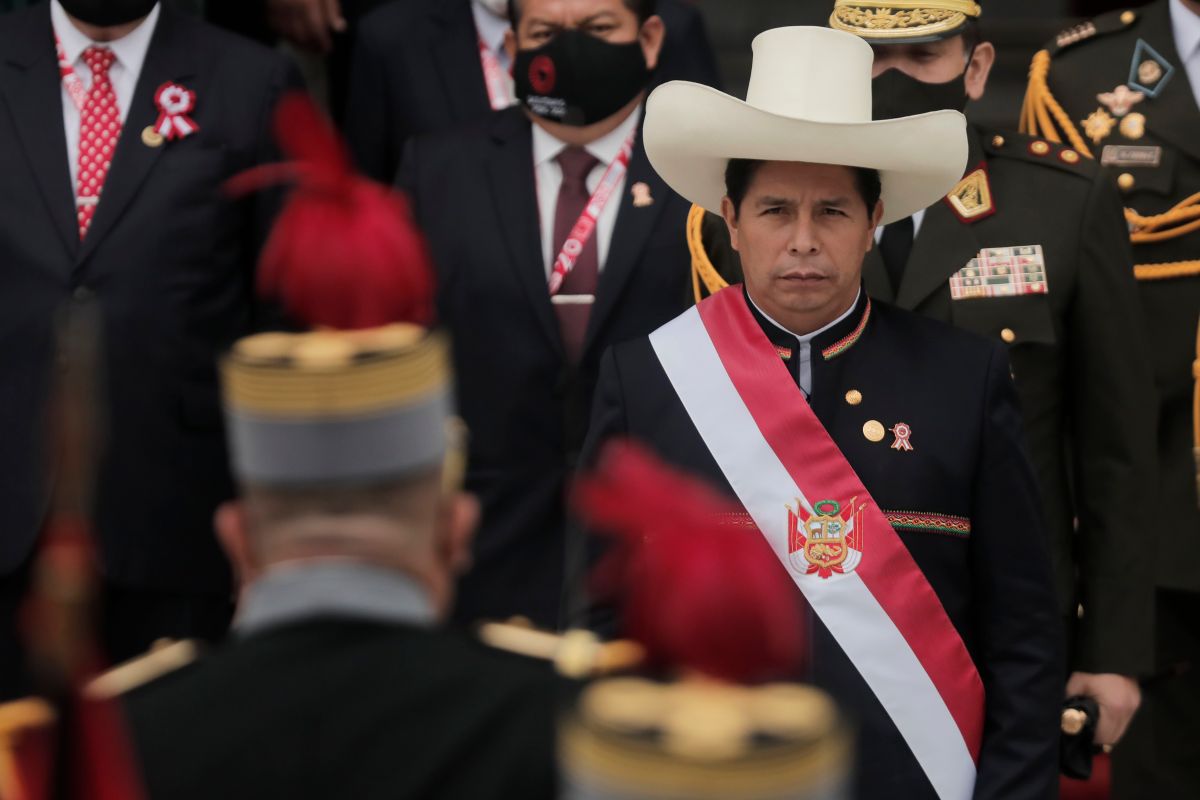 Finally, after a long wait, Pedro Castillo became president of Peru on Wednesday.

The confirmation of his victory was delayed 43 days, which passed from the second round of the presidential elections until the National Elections Jury completed the review of more than 200,000 votes requested by the candidacy of his rival, Keiko Fujimori, and gave Castillo the winner by the narrow margin of 44,000.

Castillo, a school teacher with experience as a trade unionist but little known to the general public before the electoral campaign, was finally declared president-elect and was sworn in on July 28, the day that Peru celebrates the bicentennial of its independence.

Under the slogan “no more poor in a rich country”, Castillo has promised a fairer Peru.

Fujimori and other prominent voices, such as the writer Mario Vargas Llosa, they assure that Castillo will push Peru towards communism and the country could suffer the same fate as Cuba and Venezuela.

For “the teacher”, as his followers call him, the most difficult exam begins from now on.

These are the four biggest challenges ahead.

1. A weak president in the face of a fragmented Congress

Peru has lived in recent years in great political instability, as revealed by the fact that it has had up to four presidents in the last three years.

The President of the Republic seems to have become the weak link in a system that confers great power on Congress.

And Castillo will face a very fragmented Legislative, in which his party, Peru Libre, will only have 37 of the 130 congressmen that comprise it.

Several of the parties represented, starting with the Popular Force of Keiko Fujimori, have announced a frontal opposition and the problems will arise from the first day, since the delay of the final electoral result reduced to a few days the transition of the government of Francisco Sagasti to the new one from Castillo.

Experts coincide in pointing out the climate of polarization that characterizes current Peruvian politics.

Ramiro Escobar, professor of Political Science at the Antonio Ruiz de Montoya University in Lima, told BBC Mundo that “it should not be forgotten that Castillo received less than 20% of the votes in the first round, and many of those who they voted for him, they did it only to prevent the triumph of Keiko Fujimori ”.

For Escobar, “Castillo’s success will depend on his ability to reach agreements in such a divided Congress,” especially if he wants to make his project of a new Constitution a reality. The new president has recently called for dialogue with Fujimori.

Escobar recalls that “in the 2017 teachers’ strike that he led, Castillo was able to negotiate with Fujimori and achieve job improvements.”

That strike was the first step towards the popularity of the rural teacher.

But the current context shows differences.

Fujimori insists that Castillo’s victory was “illegitimate” and, although he recognized the results “because the Constitution mandates it,” he has not shown any intention of reducing hostility to the new president.

Hernan Chaparro, a social psychologist from the University of Lima, highlights that “Fujimori is already competing in the 2026 elections with extreme right-wing parties,” which would explain the fiery tone of the statements of its leaders.

Still, he warns: “An obstructionist strategy can take its toll on them; It will not be as easy for them to overthrow the president as it has been up to now ”.

“Perhaps the needs of each other will moderate in the process,” he adds.

The problems for Castillo in Congress will not be only in the other groups, but he will also have to make an effort so that his own caucus does not become a problem.

And it is that Castillo’s relationship with Peru Libre, the party that led him from candidate to president, is only recent and very particular.

Chaparro affirms that “Peru Libre was only a surrogate for Castillo, whose initial intention was to form another party.”

The general belief in Peru is that the one who really controls Peru Libre is its president, Vladimir Cerrón, controversial ex-governor of the Department of Junín convicted of corruption, to whom radical views of the left are attributed.

In fact, one of the attacks that Fujimori repeated the most against Castillo in the campaign presented him as subject to the dictates of Cerrón.

Since the vote, Castillo has winked at moderation and denied planning expropriations and nationalizations. Castillo could get closer to the former presidential candidate Verónika Mendoza, who leads the Juntos por el Perú party, which would help her broaden her parliamentary base, although she would continue to be forced to win support among the groups further to the right.

Together for Peru is seen as a force of the left, but far from the extremes in which Cerrón is located, and more linked to urban sectors and more progressive than Castillo himself and his rural bases.

Escobar indicates that “Castillo needs to reach pacts and it remains to be seen that Peru Libre will let him do it.”

Chaparro agrees that “the balance with Peru Libre is going to be very difficult.”

Shortly after the elections, Waldemar Cerrón, Vladimir’s brother, warned Castillo: “The day he separates from the party his misfortune begins.”

Castillo’s wife, Lilia Paredes, for her part, told the RPP network: “Vladimir Cerrón will have ideals; my husband has others ”.

3. The fight against covid in Peru

The hit of the covid pandemic has been brutal in Peru. The country has reported the highest death rate in the world per 100,000 inhabitants.

Escobar believes that “the government’s first challenge will be to continue with vaccination, which has gone reasonably well so far.”

More than a third of the population has received at least one dose. A few days before leaving office, President Sagasti announced an agreement for the purchase of 20 million of the Russian Sputnik vaccine.

The authorities’ forecast is to have 71.2 million doses before the end of the year, but the Castillo government will be responsible for continuing with the vaccination and ensuring that the laboratories comply with the commitments made.

Hernando Zevallos, Castillo’s health advisor and whom many see as a future minister, promised a “massive application with community participation.” The goal is for the entire adult population to have been vaccinated by 2021. The success of the plans will depend on the availability of vaccines and the capacity of the State to supply them, also in rural Peru.

4. An economic recovery to be confirmed

Peru was in recent years one of the most dynamic economies in Latin America, but one of the keys to Castillo’s success is that many in the country feel that they did not benefit from its growth.

30% of the population lives in poverty and 70% of those who work do so in the informal economy.

Added to its difficulties was the effect of the pandemic in 2020, the year in which the Gross Domestic Product (GDP) fell by 11.1%.

The World Bank expects a “strong rebound” in 2021 and Peru, the world’s second largest copper producer, should benefit from the rise in the price of the raw materials it exports.

But everything will depend on the evolution of the pandemic and the measures applied by the new government, whose economic policy is still unknown.

Castillo has said that he is not going to “copy the model of any country”, in response to those who accuse him of wanting to replicate the statist policy of Cuba and Venezuela, and in recent weeks he has taken steps interpreted by analysts and investors as nods to the moderation.

He asked Julio Velarde to continue in his position as president of the Central Bank and appointed as his economic advisor to Pedro Francke. Both have prestige in the world of business and markets.

For Chaparro, it is becoming clear that “there will not be extreme measures of the radical left because they do not have the support of Congress or the public and they are not even Castillo’s convictions.”

But among the new president’s campaign promises is a negotiation with mining companies that exploit Peru’s resources and that many communities accuse of damaging the environment and not sharing a fair share of their benefits with the nation.

“The communities feel that the new president is one of their own. What will happen if he tells them that everything cannot be as they would have liked? ”Asks Chaparro.