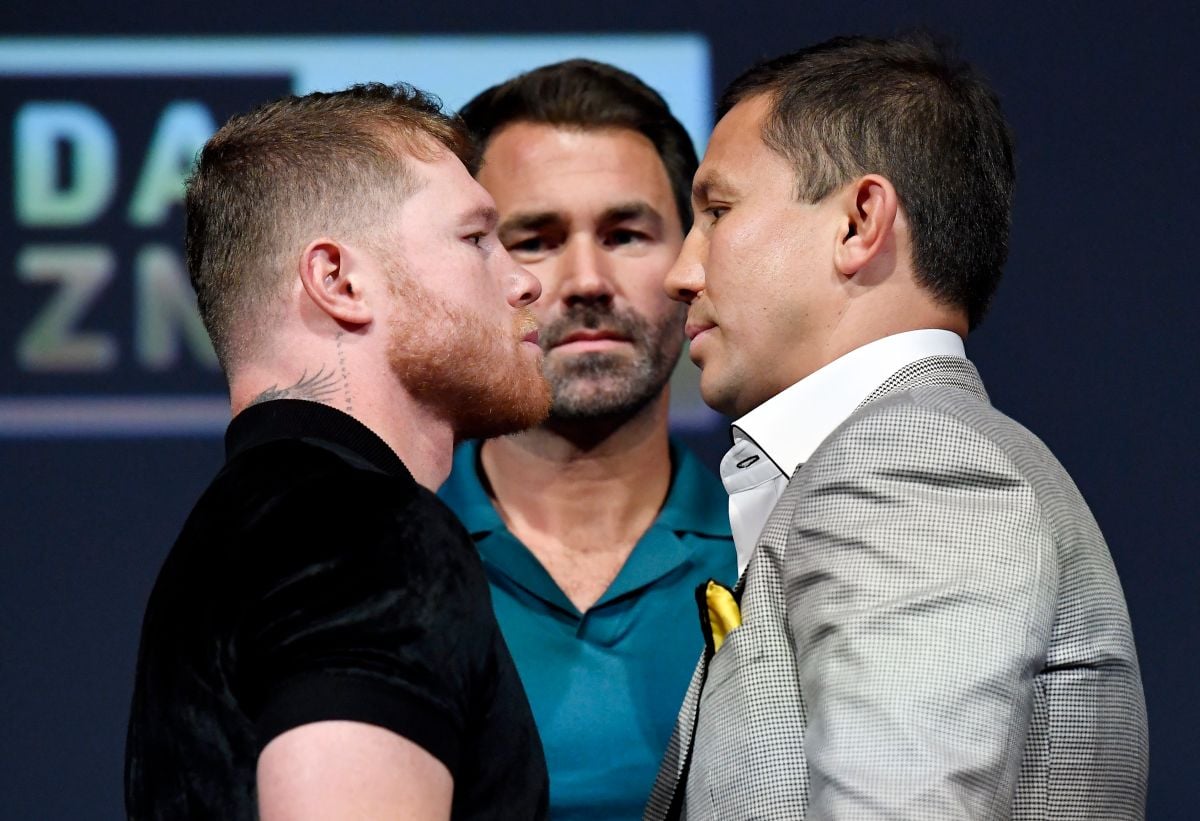 Saúl “Canelo” Álvarez cannot deny the contempt he feels for Gennady GolovkinNot even because it’s been almost four years since their most recent lawsuit. This Friday in Hollywood the two boxing legends met with the media for the launch of a promotional tour towards their third battle and the Mexican began to throw fire: “He knows what I think of him…”, Álvarez told the meet with boxing writers.

“He is stupid, but he is what he is”, attacked “Canelo” Álvarez. He then explained the reasons for him accusing Golovkin of talking too much. He did not elaborate on those alleged statements that bothered him.

“I don’t pretend to be one way, nice or not; I am who I am, I’m not trying to pretend to be someone else. He’s always trying to come across as: ‘I’m a good person…’. It is not”.

A while later, in their first face-to-face in four years, Álvarez seemed to want to eat “GGG” alive. His faces were two or three inches apart and the Mexican kept getting closer and closer to the 40-year-old veteran, who didn’t seem to flinch. The tension reached its maximum on the stage of the theater where the event was held and that serve as a preview of what will happen on September 17 in Las Vegas.

And the man from Guadalajara added referring to the alleged “Mexican style” of the Kazakh in the ring: “Everyone loves the Mexican fans, because they believe they are the ones who buy the PPVs, and it is true, but they come out with the Mexican colors, etc. For them it’s just business, not for me. I am truly Mexican and I fight for the people“.

Golovkin said he did not understand why “Canelo” seems so angry with him and takes the lawsuit so personally. “At the end of the second fight we shook hands and I thought that the past had been left behind,” said “GGG” in his talk with reporters, saying that for him it is another boxing match and that he has nothing personal.

During an onstage chat moderated by promoter Eddie Hearn, Golovkin even said he has respect for Alvarez.

Canelo Álvarez feels motivated and does not want to make excuses

This May 7, the Russian Dmitry Bivol shook world boxing by convincingly beating Saúl Álvarez in a light heavyweight match, a division to which the Mexican climbed in search of making more history. It was his second professional loss.

“I feel that I am more motivated, I think that right now I am a much more dangerous fighter… After a loss, I really want to come back”, commented Álvarez. “I am a person with a very strong mentality, it hurt me a lot to lose obviously, because nobody likes to lose, but life is like that: you win, you lose, but in the end, greatness lies in getting up and moving forward; get up stronger than ever and in those I am ”.

Someone asked “Canelo” if he felt that the public gave him enough credit as a boxer and his answer was automatic: “People will never give me that credit… and I’m not worried, what worries me is moving on and do what’s best for my career.”

Then he elaborated on the subject: “It has always been like that. It doesn’t matter if I win or if I lose; if I win, (they say) because it was terrible. If I lose, (they say) that for something else. So I don’t care what those people in particular think, because in the end you’re not going to make them happy… It’s never mattered to me”.

“Canelo” didn’t want to talk about his alarming exhaustion in the second part of the fight with Bivol, saying that it is something that stays within his camp.

“I don’t want to make excuses, only we in the team know what happened, why it was that I got tired. If you guys watch the first five rounds, I’ll beat you, but after that I started to get tired. Many things happened, but I don’t want to make excuses: I lost and that’s how I take it. Mine will come, the time will come when I have my opportunity again and it will be very different, ”explained the undisputed 168-pound champion, which is the division in which he will face Golovkin. The previous two times it was at 160 pounds, the natural weight of the Kazakh boxer.

Álvarez is sure he will knock out Golovkin.

“Of course,” he replied when asked if he wants to send him into retirement.

– Do you want to be Gennady’s last rival?