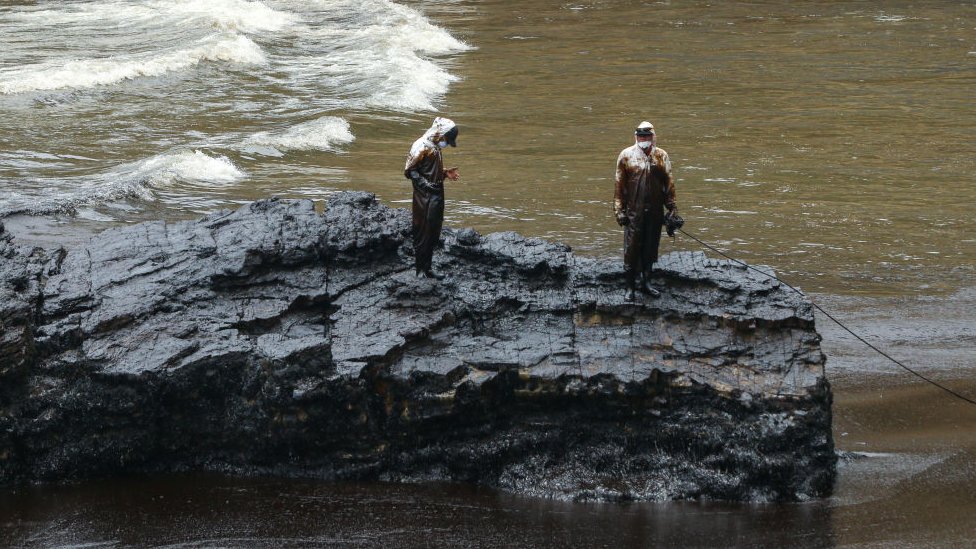 The Ministry of Environment of Peru declared this Saturday an environmental emergency for 90 days in the coastal area affected by an oil spill that occurred on January 15.

The spill off the coast of Lima was allegedly caused by a strong wave attributed to the eruption of the submarine volcanoHunga-Tonga-Hunga-Ha’apai in Tonga, which affected a ship belonging to the Spanish oil company Repsol while it was unloading crude oil.

The oil spill, which so far affects an area of ​​about 3 square kilometers of beach and sea, is considered the worst ecological disaster in Peru’s recent history.

Authorities say that the leak damaged some 18,000 square kilometers of protected areas containing a variety of plants and animals.

For its part, the National Service of Natural Areas Protected by the State (Sernanp) reported that the oil is moving with the current to the north, affecting the areas of the National Reserve System of Islands, Islets and Puntas Guaneras in 512 hectares and the Ancón Reserved Zone in 1,758 hectares.

Teams of veterinarians, marine biologists and volunteers have worked hard to rescue marine and coastal fauna. Images have shown various species covered in oil, many of them dead.

The animals that have been rescued have been washed with anti-greasy soaps and taken to rehabilitation centers.

the ship Mare Doricumis is immobilized on the high seas with a bail of 39 million dollars and the spill is being investigated by the prosecution as a possible crime of environmental pollution.

Repsol reported this Saturday that it has removed more than 2,384 cubic meters of sand affected by the spill, according to the EFE news agency.

More than 1,350 people have carried out cleaning tasks in the affected land and sea area. An additional 224 people will join the team this Saturday, the company said.

“The crude oil spill constitutes a sudden event with a significant impact on the coastal marine ecosystem of high biological diversity and a high risk to public health,” states the environmental emergency declaration.

Repsol operates in Ventanilla, in the port province of Callao, neighboring Lima. It has 90 pieces of machinery at its disposal for cleaning, including 46 heavy vehicles on land and 13 larger vessels, EFE said.

Repsol reported that it will implement an additional 2,500 meters of barrier in the coming days.

Meanwhile, the Minister of the Environment, Rubén Ramírez, announced that on Sunday he will meet with the Minister of Production, the Foreign Ministry and the fishermen of the area, one of the industries most affected by sea pollution, which he described as a “social problem”, on official social networks.