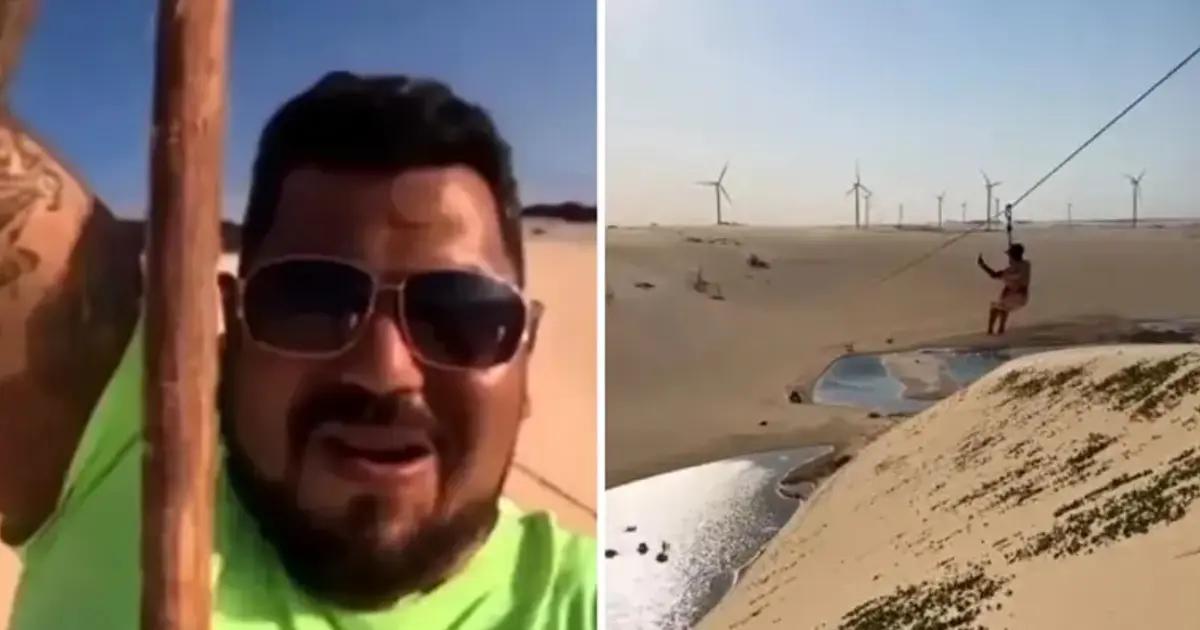 Without imagining it, Sergio Murilo de Lima Santana, a 39-year-old tourist, recorded his own death when the zip line he was descending in Ceará, Brazil, and quickly went viral on social networks. The man suffered a fatal blow when the beam supporting one end of the pulley collapsed. So far, the authorities have not offered details about the event, and the height from which he fell is unknown.

The incident was captured by several cameras from multiple angles, since not only Santana filmed it, but also his wife, who was on the ground, arranged in the same direction in which the zip line would move him. In the image it was possible to observe that the pulley that was suspended by cables went from one sand dune to another, and in the middle there was a gap of at least two meters.

Santana was sliding down the attraction at a Canoa Quebrada resort in Aracati municipality on Oct. 10 when its support structure suddenly collapsed, causing it to sink into the sand with a thud, the video showed.

In the clip, the man could be seen in the foreground smiling excitedly when an employee of the attraction pushed him from the starting point and began to slide down the zip line while holding the cell phone with one hand and a cable with the other . In a few seconds, the image changed radically and it could be seen that the camera that Santana was holding fell to the ground and only focused on the sand. Moments later, his footage was drastically cut.

However, that was the angle that the victim recorded. It was the footage of his wife that most widely recorded how the man suddenly fell into the void. The video that went viral is the compilation of the two recordings.

After the fall, his wife began to run desperately to the place where the man had fallen to help him. According to the New York Post , Santana was taken to a local hospital where he was pronounced dead upon arrival .

Likewise, according to Folha de Sao Paulo, the Department of Public Security and Social Defense of Ceará contacted the owner of the attraction, and both he and an employee of the establishment have already given a statement to the authorities.

It also transpired that the tourist was from Belém and a few days ago he had arrived with his wife in Aracati, a place known worldwide for the Canoa Quebrada beach. Moments before the accident, Santana even posted photos of the zipline on his social media .

According to the local media, an Aracati Police official, who refused to give his name, explained that the place where the zip line was was considerably high and that the expertise was done on Tuesday, but so far there is no report. end of case. He specified that with this information they could know the exact height from which the fall occurred.