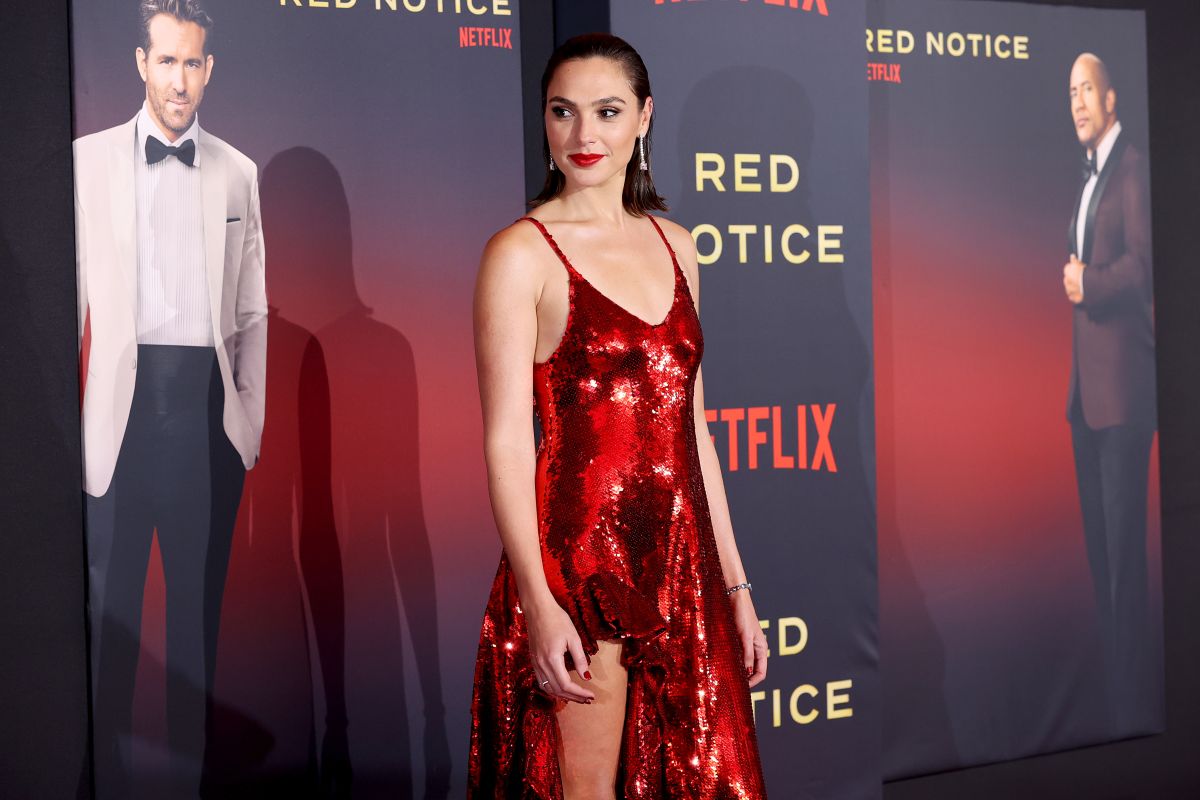 There are exactly seven days left for loyal Netflix subscribers to view the premiere of ‘Red Notice on the streaming service platform‘. The film features an upscale cast lead by Dwayne Johnson, Ryan Reynolds and Gal Gadot. The new film production will have a budget of $ 200 million dollars, the most expensive that Netflix produces up to date. Release date is scheduled for November 12.

Proof of promoting the new film were the ostentatious looks with which the stellar casting attended the premiere of ‘Red Notice’ in Los Angeles, California. Gal Gadot casts a spell on everyone from the red carpet, with a wonderful red dress covered in sequins, for the cameras together with her husband Yaron Varsano. Equally amazing, the 36-year-old Israeli actress wore a platinum-colored bracelet with blue tourmaline, diamond earrings and jewels from the Tiffany Blue Book 2021 Collection, a fashion brand she promotes as an ambassador.

Gal Gadot completed her ostentatious glamor with her shadowed features, eyeliner and broad black lashes that deepened her gaze. The red sequined dress comes from the Spanish fashion brand Loewe, whereas the V-neck garment that had a slit on her right leg drew attention. The interpreter of ‘Wonder Woman’ wore a pair of heels from the Stuart Weitzman.

For his part, Ryan Reynolds wore a red velvet suit accompanied by a vest and a patterned tie, while Dwayne Johnson wore a plum-colored velvet suit, paired with an unbuttoned white dress shirt and a pair of loafers.

Notably, ‘Red Notice’ marks Gal Gadot’s return to the big screen after her pregnancy. The Israeli actress will share the screen with one of the most sought-after actors in Hollywood, Dwayne Johnson, and next to Ryan Reynolds. The later previously stated that he will be temporarily retiring from acting to spend time with his family.

It is also known that Gal Gadot earned $ 20 million for her role in ‘Red Notice’. Plus, the actress announced last Wednesday that she will play the Evil Queen in Disney‘s liveaction adaptation of Snow White where he will share the screen with the Latin actress Rachel Zegler as a protagonist. It is estimated that the project will start production in the early 2022. The official release date has yet to be announced.