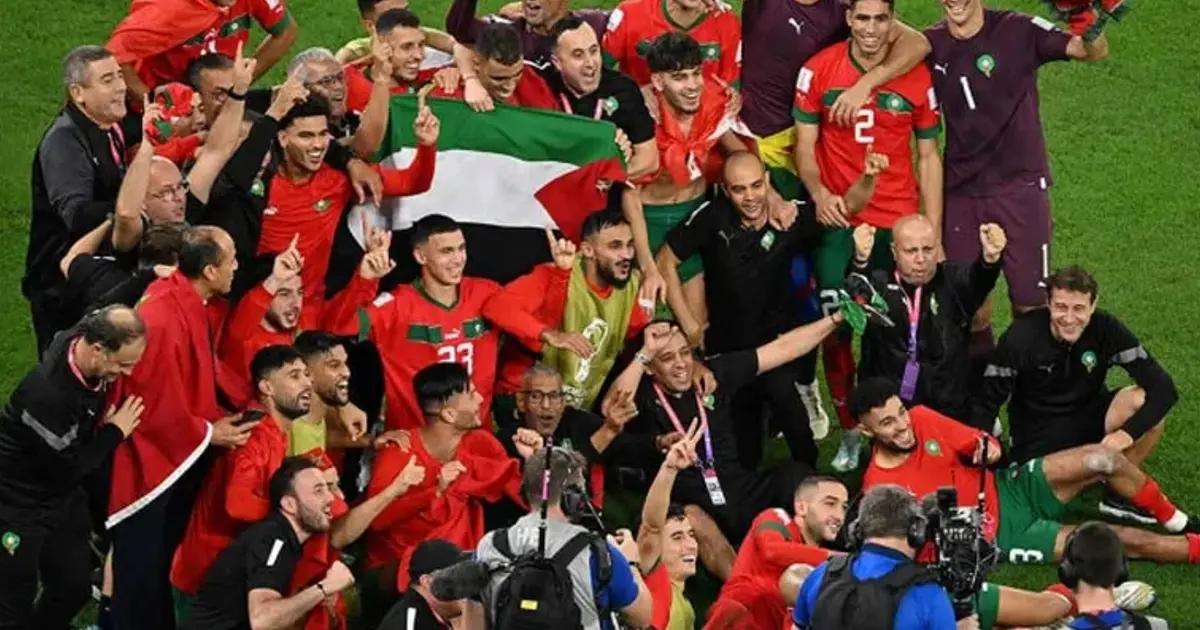 The Qatar World Cup will go down in history not only for being the first to be held in an Arab country but also for being the first in which an African and mainly Arab country reached the semifinals. Morocco’s victories over Portugal and Spain sparked euphoria in the streets of Morocco and throughout the Middle East. After the match against Spain, as is customary, the players posed on the stadium lawn in front of dozens of photographers with a single flag. However, this was not the flag of Morocco but of Palestine.

The Palestinian team did not qualify for the World Cup, but their cause has slipped through the back door at the first World Cup to be held in an Arab country. The Moroccan team’s pro-Palestinian gesture was the most visible but by no means the only one. The Palestinian flag is omnipresent these days in Qatar: on the armbands and bracelets worn by thousands of fans, often accompanied by the keffiyeh – the traditional Palestinian scarf – displayed in the stands of the stadiums or the post-match celebrations in the souk. Even in the match between Tunisia and France, a fan interrupted the game by jumping onto the field with the white, green, black, and red ensign.

While the organization of the World Cup has strictly forbidden to enter the stadiums with any garment with the colors of the rainbow, symbol of the rights of the LGTBI community, or the flags of pre-revolutionary Iran, it has allowed the display of Palestinian flags. Curiously, in European competition matches, flying the same flag has been punished with fines because it is considered “a political symbol.” This difference shows the extent to which the Palestinian cause resonates in the hearts of Arab fans.

Over the past decade, an oft-repeated narrative in the international press is that the Palestinian cause was relegated to the background in the Middle East. And, to some extent, it is true. The conflict in the Palestinian territories has lost its centrality in the region, especially between the 1950s and 1990s, a period dominated by pan-Arabism. Back then, demonstrations in solidarity with the Palestinian people would draw tens or hundreds of thousands of demonstrators from Casablanca to Cairo. That rarely happens anymore, but it does not mean that support for the Palestinians among Arab populations is not in the majority and relevant.

If anything, the Palestinian cause has been ignored by most Arab leaders. Some have even gone so far as to recognize and establish diplomatic relations with Israel, the so-called “Abraham Accords” sponsored by President Donald Trump. Interestingly, among them, along with the United Arab Emirates, Bahrain, and Sudan, is Morocco, making the action of the Moroccan players even more valuable.

In the case of the Emirates and Bahrain, the logic of the agreements is to form a common front against Iran, the great threat to the Arab states of the Persian Gulf. On the other hand, what induced Morocco was the recognition by the United States of Western Sahara and for Sudan to be removed from the US list of countries that support terrorism and thus be able to receive aid for its ailing economy.

For Israel, the Abraham Accords’ main objective is to expand its political and economic relations and demonstrate that it is not necessary to reach a peace agreement with the Palestinians to integrate into a region that has turned its back on it since its creation in 1948. In other words, it is a matter of convincing Palestinian leaders and the world that Israel has won and does not need to make any concessions to end the conflict.

The World Cup in Qatar has shown the limits of Israel’s strategy, and it has done so by bringing the message directly into Israeli homes. Journalists from that country in Doha have recounted how Arab fans have refused to appear on their networks and answer their questions or have engaged with them in pro-Palestinian arguments. In contrast, one Egyptian fan did say he wanted to cooperate. After waiting patiently for his turn, he leaned toward the camera and said live on air, “Long live Palestine!”

“Tens of thousands of fans waved the Palestinian flag and chanted songs. This shows that the struggle of the Palestinian territories still enjoys great support despite the rulers’ policies,” explains Palestinian activist Amer Abumattar in an e-mail message, proud of the support received by his country in Qatar. In those territories, photos and messages of support have been widely circulated on social networks.

This being the case, the tenacious and majority support for the Palestinian cause may cool Israeli aspirations to expand the list of signatories to the Abraham Accords. Rumors suggested that the next ones could be Oman or Tel Aviv’s most coveted piece: Saudi Arabia, guardian of the Islamic holy cities of Mecca and Medina. A World Cup is never just about soccer, no matter how much FIFA makes it seem.