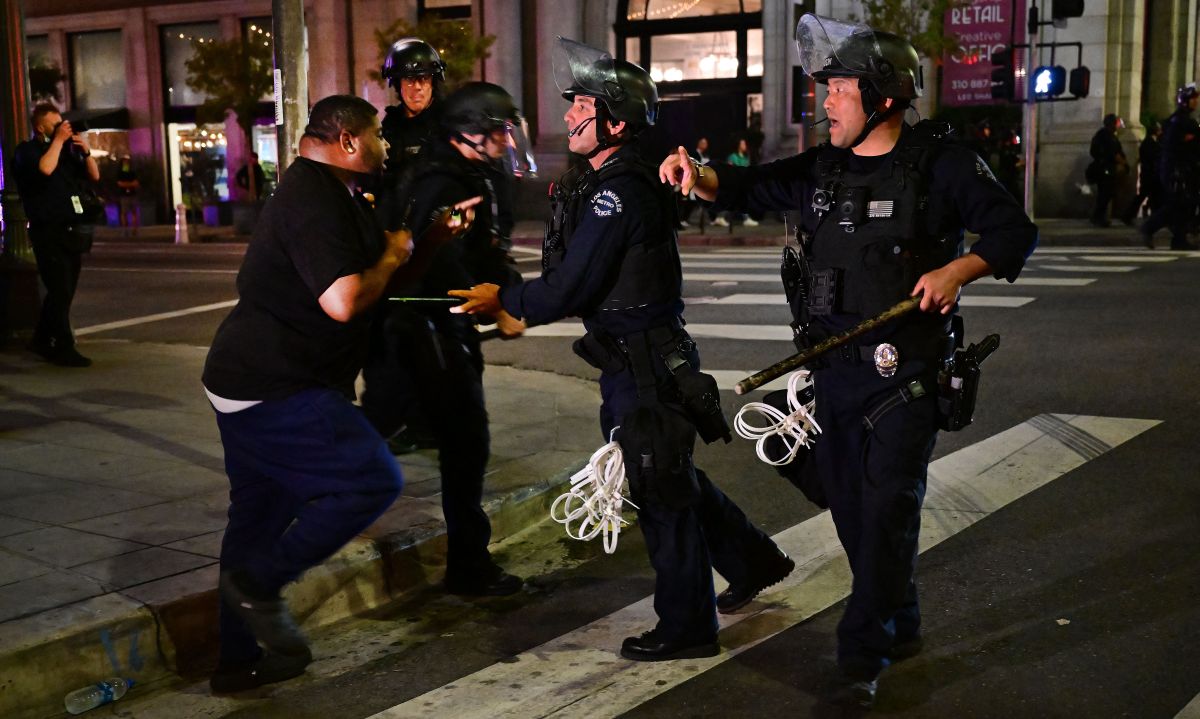 The Law enforcement officers in Phoenix, Arizona used tear gas to disperse a sizeable group of protesters outside the Senate building of the state Following the US Supreme Court’s decision to overturn the landmark Roe v. Wade.

“Protesters threatened to break glass at Arizona Senate entrance,” Arizona Republican Sen. Wendy Rogers tweeted as members were in the midst of voting on a series of bills.

the iThe incident escalated into a “hostage” situation when lawmakers were ordered not to leave the building, Republican Sen. Kelly Townsend said.

The Senate Republican Caucus State then described the protest as an attempted “insurrection”.

“We are currently being held hostage inside the Senate building due to members of the public attempting to breach our security,” Townsend tweeted Friday night. “It smells like tear gas and the children of one of the members are in the office sobbing with fear.”

“I hope that a J24 committee will be created immediately,” he added, referring to the January 6 committee that is investigating the US Capitol insurrection on January 6, 2021.

According to lawmakers, law enforcement officers fired tear gas to disperse the crowd and regain control of the building.

“The crowd was dispersed with tear gas,” Rogers added, noting that the protests were still continuing and the situation remained “very dangerous.”

Another legislator confirmed the use of tear gas outside the building.

“While working inside, we were interrupted by the sound of explosions and the smell of tear gas,” Rep. Sarah Liguori tweeted Friday night. “Protesters have retreated from the Capitol.”

The crowd of protesters dispersed and lawmakers resumed their legislative agenda in a secure room.

“We headed to a secure room to go vote,” Rogers said.

“Everyone is fine and we are finishing our work,” Townsend added.

“I feel safe on Capitol Hill as I sit next to 3 of my fellow senators who are armed,” added state legislator Warren Petersen.

In the hours after the situation, several members thanked the law enforcement officials who protected the Capitol.

“Violent insurgency attempts by pro-abortion protesters in the Arizona State Senate were thwarted Friday night, thanks to swift actions by state and local law enforcement,” said Kim Quintero, director of communications from the Republican Caucus.

The Republican group said the “extremist demonstrations” were staged by people who “tried to force their way into (the building) by smashing windows and kicking down doors.”

“We are incredibly grateful for our local law enforcement who stepped in quickly during what could have been a destructive and dangerous situation for our members, staff and public inside the Senate,” said Senate President Karen Fann.

Friday was the last day of session for state senators, who wrapped up a series of votes after the break.

The votes included a massive expansion of the state’s private school voucher system that was approved by the House earlier this week.

The US Supreme Court overturned Roe v. Wade on Friday afternoon, effectively giving individual states the power to allow, limit or ban the practice as they see fit.