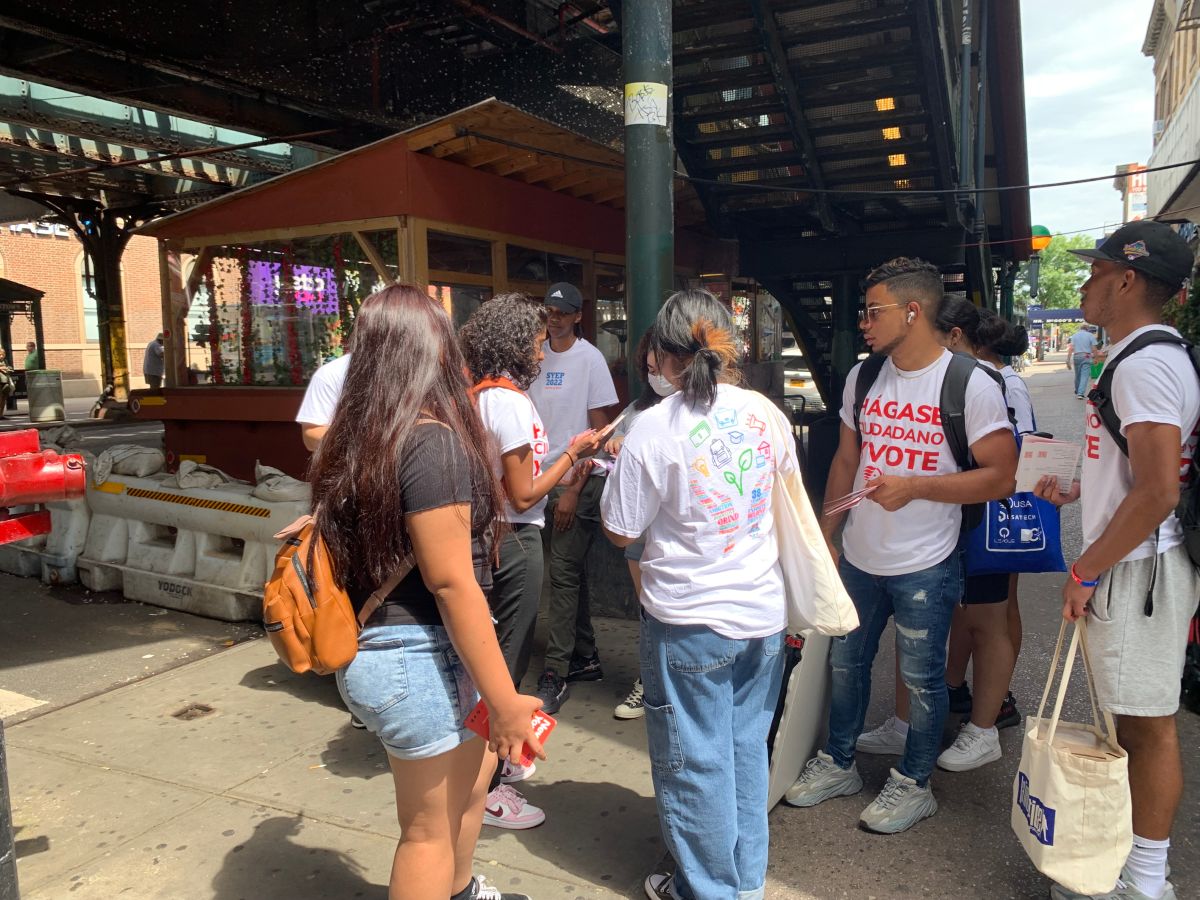 Dominicans in New York have not only grown in number but also in qualitative terms. With more than a million, Quisqueyans far outnumber Mexicans and Puerto Ricans, and not only that, they have achieved considerable political weight.

This is the result of a process where several community and non-profit organizations have bet over the years on two things: education and civic participation. With these two tools, its citizens were empowered in many spaces that are now bearing fruit, especially after registering a large number of voters.

The Dominican National Parade in New York celebrates its 40th anniversary this year and since its creation it has set itself the mission of raising funds to award scholarships to young students in its community.
The president of the parade, Cristina Contreras, speaks enthusiastically about the entity’s recent achievements.

“In less than 5 years we have managed to deliver almost a million dollars for more than 200 Dominican students throughout the country.”

According to Contreras, the action of the organization is not only focused on helping young Dominicans in the area, but they are projecting themselves at the national level.

“We have scholarship applications from everywhere and we even plan to extend it next year for students who are in the Dominican Republic. Right now we have more than a thousand applications for scholarships and we already have 51 selected”.

Contreras’ experience is the same as that of many Dominicans who were educated in New York’s public school and university system and who today are successful professionals. She is president of the Metropolitan Hospital.

“We are more than a parade, sometimes people focus only on this, but throughout the year we develop extensive work with sponsors who believe in our mission, which is to raise funds for students with future generations in mind. That is our legacy,” added Contreras.

Eddie Cuesta is another fervent manager of the progress of his community, but from the vision of registering voters and empowering them in the civic right to participate in electoral processes.
Cuesta is the founder of Dominicanos USA (DUSA) whose specific mission is to educate the community in the civic, social and economic process.

“From the beginning our goal has been to ensure that every person who obtains United States citizenship exercises their right to vote.”

According to Cuesta, to date DUSA, which began its action 7 years ago, has registered 130,000 people in New York alone. In the South Bronx, it has registered more than 60,000 and, in addition, it has guided the community in all electoral processes to ensure that they can vote correctly at the polls.

“The mobilization work that we have promoted during the last years, registering them and educating them, results in the fact that today we have a large number of elected officials. The work has been extraordinary because we have seen the growth of our community,” says the activist.

With 6 state assembly members, 3 council members, 1 congressman in Washington, 1 commissioner in the Adams administration, the vice presidency of the Bronx county, and countless high-ranking officials in the Police and within the city administration gear, the Dominicans have an enviable presence.

Cuesta agrees that the focus on educating the new generations and voter registration were key to the Dominican phenomenon.

“In 1960 we were 12,000 Dominicans and in 2022 we are more than a million. We have grown in all areas. In the academic field, we have Daisy Cocco DeFilippis, as president of Hostos Community College in the Bronx, there are groups of businessmen, doctors, architects, lawyers, supermarket and warehouse owners”.

According to figures handled by DUSA, Dominicans constitute the largest Hispanic group studying in the CUNY university system.

“It is something that had not been seen and that we value because they are people who are giving back to their community what it gave them at the time. In other words, we believe that we are training our young people as architects of their own future”, assured Cuesta.

To precisely analyze the evolution of the Dominican diaspora, in 1992 the Dominican Studies Institute of the City University of New York (CUNY DSI) was founded, being the first university research entity in the country dedicated to the study of people of Dominican descent. in the United States and other parts of the world.

CUNY DSI’s mission is to produce and disseminate research and studies on Dominicans and the Dominican Republic. The center is headed by Dominican sociologist Ramona Hernández, Ph.D.
Dominicans in the United States have made a substantial leap in socioeconomic progress in the past two decades, the most recent CUNY DSI research report concluded.

Education has been the key factor in this Dominican success story, fueled by the increased schooling of US-born Dominicans. According to the study, Dominicans born in the United States have now surpassed the country’s general population in educational attainment.

Much to celebrate in the Dominican parade

The Dominican celebrations reach their climax this Sunday when the National Dominican Parade (NatDDP) will take place, which this year reaches its 40th edition.

“In these four decades, the Dominican community is leaving a legacy around the world based on perseverance, resilience, faith and hope for a better tomorrow for all,” said Cristina Contreras, president of NatDDP Inc.

The event, which annually brings together some 400,000 people, according to the organization, will take place on 6th Ave., also known as Avenida de Las Américas, between 35th and 56th streets in Manhattan starting at 12 noon.

Joy and music cannot be missed in this parade in which folkloric rhythms, salsa and merengue are exhibited. Likewise, each year the figure of the Grand Marshal is highlighted, a distinction that this year went to Ydanis Rodríguez, the current Transportation Commissioner of the City of New York.

“Ydanis is the first Hispanic Transportation Commissioner of Dominican origin in the history of the city and that has great merit. We are proud, he represents the struggle and we want our young people to see his example, where we come from and what we can achieve, ”contreras emphasized.

On Wednesday, the Consul General of the Dominican Republic in New York, Eligio Jaquez, together with a group of local personalities and businessmen from Quisquey and from the island, visited the commissioner in his office to learn about the complexity of his functions.

“Running the largest public transportation system in this nation is both a lofty responsibility and a great distinction. We feel full of pride that it is a Dominican who is at the forefront,” said the consul.

In general, the meeting highlighted the work of Rodríguez at the head of the agency and the challenges that Dominicans face as a growing community.

Likewise, the Commissioner thanked the distinction for his designation as the Grand Marshal of the event.
“We are the reflection of the history of everything we are, hard-working people and that is what we are going to celebrate this Sunday,” Rodríguez said.

The parade is expected to bring together more than 40 floats and dozens of troupes dressed in spectacular dresses, feather suits and masks with a very special symbology. There is never a lack, for example, of the typical “Devil Cojuelo”, the main character of the Dominican carnival.

This year the parade recognizes Conjunto Quisqueya with the award for their 50 years of delighting Dominicans and Latinos with their art of merengue.