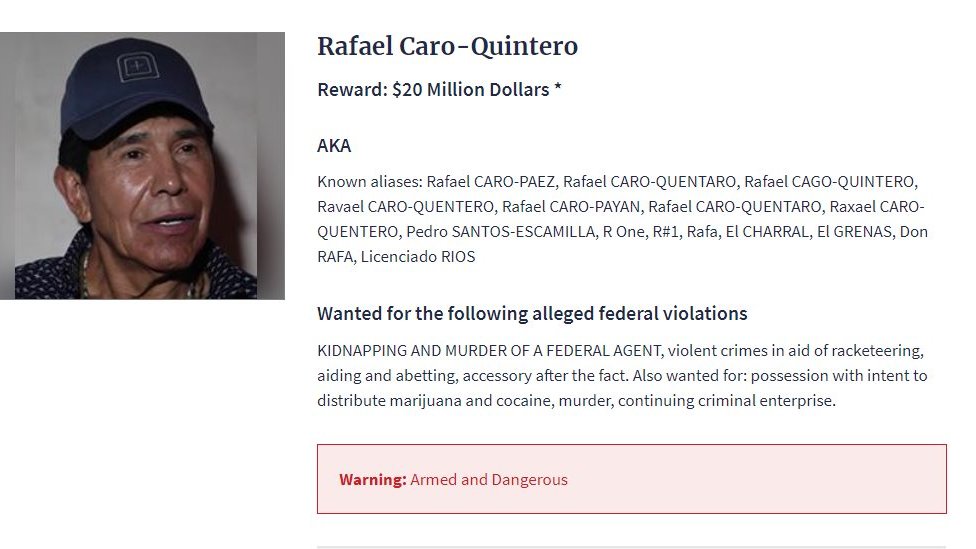 The former leader of the Guadalajara cartel was called the Prince because of the luxury clothes and ostentatious jewelry he always wore.

But the outfit was a part of the fame. In the 1980s, Rafael Caro Quintero was known as the largest marijuana producer in Mexico.

In one of his properties, for example, the largest operation against drugs in the history of the country took place: more than 10,000 tons cultivated in the El Búfalo ranch were destroyed.

Caro Quintero ordered the kidnapping of the person who discovered the shipment, the agent of the US Drug Enforcement Administration (DEA, for its acronym in English). Enrique Camarena-Salazar, as well as the Mexican pilot Alfredo Zavala Avelar.

They were both killed. The death of the American policeman, which occurred in 1985, caused one of the deepest crises in the relationship between Mexico and EUSA

But it also marked the fight against drugs by the Washington government.

Caro Quintero was captured by the Mexican authorities this Friday, after being a fugitive for nine years.

It was him DEA Most Wanted Fugitive, offering up to $20 million for information leading to his capture.

The Federal Bureau of Investigation (FBI, for its name in English) offered a similar reward.

Caro Quintero, 69 years old, its Taba fugitive after being released by a judge in 2013, when he had served 28 of the 40 years he was sentenced to prison.

In the 1980s, Mexican and US authorities estimated Rafael Caro’s fortune at $500 million.

But the origin of the Prince is very different. He was born in October 1952 in La Noria, a marginalized community in Badiraguato, in the state of Sinaloa.

of this municipality several of the most famous drug lords are fromlike Joaquín Guzmán Loera, El Chapo.

In an interview given to the journalist Anabel Hernández, the capo said that his family was very poor and that he was forced to grow marijuana after the death of his father.

I was 14 years old. Caro Quintero says that there was no other way to support his family.

Badiraguato is located in the golden trianglea mountainous region between the states of Sinaloa, Chihuahua and Durango and one of the areas with the highest production of marijuana and poppy in the country.

In a short time, the Prince progressed in the business and at 30 years of age he was one of the main partners of Miguel Ángel Félix Gallardo, known as the Boss of Bosses.

Gallardo was the first Mexican drug trafficker to export cocaine to the United States.

The DEA named their organization the Guadalajara Cartel after the city where the Chief of Chiefs, Caro Quintero, and other drug leaders resided.

The excesses of the Prince

Since 1975, Guadalajara – capital of the state of Jalisco – had become a refuge for many drug traffickers and their families, who arrived from Sinaloa.

Two years earlier, in the Golden Triangle, the Mexican government had initiated Operation Condor, a strategy to eradicate marijuana and poppy cultivation from that region in northwestern Mexico.

The heads of the organizations, including Caro Quintero, left the region and settled in the capital of Jalisco.

According to academics such as Luis Astorga, the capos managed to blend into local society when they presented themselves as prosperous businessmen.

Félix Gallardo, for example, was a bank advisor, and Expensive Quintero he presented himself as a farmer and rancher.

The presence of the capos alerted the US government that sent a DEA team to the city. Enrique Camarena, born in Mexico and known as Kiki, was one of them.

For some time drug leaders went virtually unnoticed, but the situation changed in the 1980s.

According to local journalists such as Felipe Cobián to the journalist Alberto Nájar in an article published in 2019 by BBC Mundo, the change was due to the excesses of characters like Caro Quintero.

The Prince used to lead scandals in restaurants and nightclubs, and was even accused of kidnapping the niece of a prominent local politician, Guillermo Cosío Vidaurri, who was governor between 1989 and 1992.

But the most serious case was the murder of Camarena. The agent was kidnapped in February 1985 as he was leaving the US consulate in Guadalajara.

He was then taken to a nearby house along with the pilot Zavala Avelar. Both of them they were tortured and then killed.

Their bodies turned up weeks later in the neighboring state of Michoacán.

Caro Quintero fled to Costa Rica where he was arrested in April 1985. Investigations into the murder revealed that the capo and the Guadalajara cartel had created an extensive network of allies among politicians, the military, and police forces.

Camarena’s murder changed the relationship between the two countries. The US conditioned part of her aid to Mexico in exchange for combating drug trafficking.

This certification process, which basically measures the country’s degree of collaboration with the US government, was maintained until 2002.

Caro Quintero was then sentenced to 40 years in prison, but was released in 2013 on a legal technicality.

For the DEA, the murder of Enrique Camarena became a symbol. In fact, Red Ribbon Week, an annual education campaign against drug use, was established in his honor.

When promoting a civil trial against Caro Quintero in the Brooklyn court in 2019, the head of the DEA in New York, Ray Donovan, recalled that for the agency his capture was a personal matter.

“The atrocities of Rafael Caro are not forgotten, and the history of terror that it has inflicted serves as a permanent reminder that the DEA will never cease in the pursuit of justice, ”he insisted then.

Since leaving prison in 2013, Caro Quintero has been in hiding.

Those who interviewed him during his fugitive period said that he moved in the mountains of the Golden Triangle, sheltering in tents with sleeping bags.

The DEA assured that there was vloose to the drug businessand the US Department of the Treasury included his family in the list of the Office of Foreign Assets Control (OFAC, in English).

Those who are designated in this way cannot do business in the US, and their properties and bank accounts in that country are frozen.

But Caro Quintero insisted that he was clean. In several interviews he assured that he was retired and that he would never return to drug trafficking.

“I stopped being a drug trafficker in 1984 and I will never be one again, I don’t want to know anything at all ddrug trafficking. The bill I paid was very expensive, ”he assured in a conversation published by the magazine Proceso.