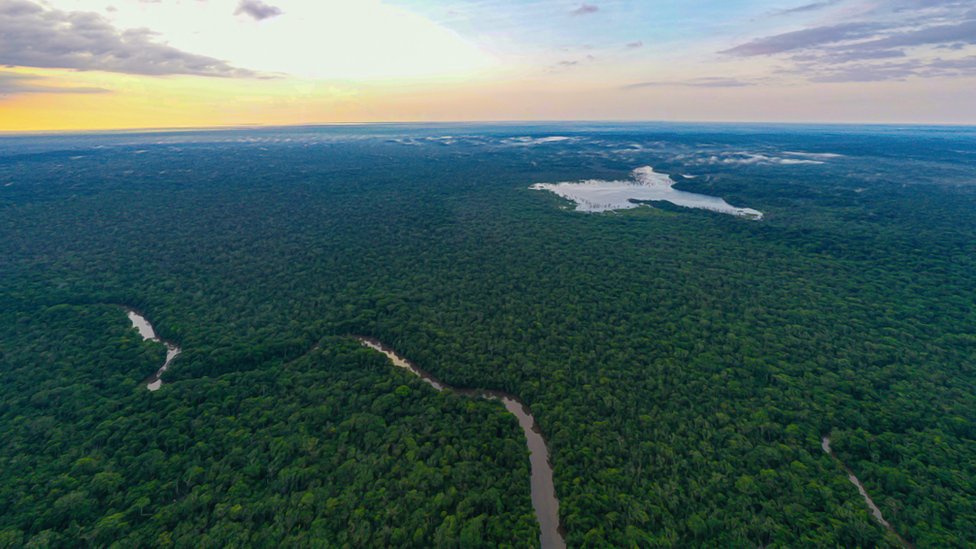 In recent days, the alleged discovery of Ratanabá, a secret civilization in the heart of the Amazon, has spread rapidly on social networks, mainly in Brazil.

According to the publications, the city would be “bigger than Greater Sao Paulo”, was “the capital of the world” and “hides many riches, such as gold sculptures and advanced technologies of our ancestors”.

Some conspiracy theories went further and said that the discovery would help explain “the true interest of dozens of powerful men in the Amazon” and even the disappearance of the English journalist Dom Phillips and the Brazilian indigenist Bruno Pereira.

Nevertheless, “youAll this is an illusion”says archaeologist Eduardo Goés Neves, professor at the Center for Amerindian Studies at the University of São Paulo (USP) and coordinator of the Tropics Archeology Laboratory at the same institution’s Museum of Archeology and Ethnology.

For more than 30 years, the specialist has been part of a network of researchers who work to reveal the past of the Amazon and the peoples who inhabited it (and still inhabit it).

“For more than 20 years, archaeologists working in the region speculated that there were cities in the Amazon, but it was considered crazy,” he says.

“Over time, that perspective changed and the academic community began to accept that there is evidence of large sites, roads and dumps built long ago,” continues the expert, although he reinforces that these findings have nothing to do with ancient civilizations or treasures. hidden.

The archaeologist explains to us why the main arguments used to speak of the “lost city in the Amazon” make no sense, according to the archaeologist, and what scientific evidence reveals about human occupation in the world’s largest rainforest.

The first detail that draws attention in the posts about Ratanabá are the dates used. In some texts, it is written that civilization would have existed there 350, 450 or even 600 million years ago.

“This doesn’t make any sense from the point of view of the geological and biological history of our planet,” Neves replies.

“To give you an idea, 350 million years ago there weren’t even dinosaurs. Our oldest ancestors lived about 6 million years ago. But our own species, Homo sapiens sapiens, appeared 350,000 years ago in Africa,” he estimates.

doORa civilization 350 million years ago? Nope there is the smallest chance of that”says the archaeologist.

Metropolis of the past, small towns of today

The second misinformation about Ratanabá has to do with the supposed city ​​size. Some publications say that it would be bigger than Greater Sao Paulo, which is currently home to about 22 million inhabitants.

“We still don’t have an exact estimate of how many people lived in these Amazon cities, but they certainly weren’t the size of Sao Paulo,” says Neves.

“In the 16th century, the most populous cities in the world were probably Istanbul, in Turkey, and Tenochtitlán, in Mexico. And they had 50,000 or at most 200,000 inhabitants”, calculates the USP professor.

Neves estimates that, before the arrival of Europeans on the American continent, there were about 10 million indigenous people in the entire Amazon. “And that number went down a lot from the 17th century because of wars and epidemics,” he notes.

Straight lines in the middle of the jungle

The third argument that gives strength to the rumors about Ratanabá has to do with tunnels found in the Amazon or with aerial images, which show straight lines and perfect squares, visible between the treetops.

According to posts on social networks, the tunnels would serve as a secret passageway and connect different parts of South America and the straight lines would be the result of human work.

Neves explains that really there are tunnels in the amazon. “The images released probably come from the region of Forte Principe da Beira, in Rondônia, which was a Portuguese colonial post.”

“These constructions are related to the border disputes between Spain and Portugal in the vicinity of the Guaporé River throughout the 18th century,” he adds.

Of the few images available of the straight lines, Neves believes they are from a region near the border between the states of Mato Grosso, Pará and Amazonas.

“These formations have been known for a long time and they really do look like perpendicular lines, which is unusual,” he says.

“The main suspicions are that it is a natural limestone formation or some kind of rock that follows this pattern”, says the archaeologist.

“It is unlikely that it was of human authorship. But, if it was really made by local people, these constructions must not be more than 2,500 years old, ”he adds.

Interest in the topic

Neves, who has no profile on social networks, confesses that I had never heard of Ratanabá until the second week of June 2022.

“When they began to ask me, I investigated and consulted other colleagues who study Amazonian archaeology, but nobody knew this story,” he says.

Although there are profiles on social networks and even published books about this “lost civilization”, the topic has gained popular interest and has become a hot topic in recent days.

For Neves, the phenomenon “seems to be a mixture of the naivety of people, who want to believe in this type of thing, with economic interests to explore the Amazon,” while recalling other similar legends, such as that of the city of El Dorado, a targeted by explorers over the centuries for supposedly being made of gold.

And we can’t ignore the racism in this context. When it is said that there were ‘advanced’ civilizations 300 million years ago, the authorship of all those constructions is being taken away from the ancestors of today’s indigenous peoples”, he adds.

The specialist refers to the hypothesis of the ancient astronauts of Erich von Däniken. “There it sounds easier to explain that the pyramids of Egypt were built by extraterrestrial beings than to give credit to the African peoples”, he compares.

“And all this denotes a deep racism with all non-European populations, such as indigenous and Africans, as if they were not capableanalyze.

Finally, the archaeologist believes that this type of rumor “acts as a smoke screen at a time when we have two missing people and diverts attention from the real problem of violence in the Amazon,” he adds.

(Lack of) stones on the road

“In general, the Amazon has few rocks. So, the main raw material used in construction in the past was earth and wood”, he contextualizes.

“To understand these periods, we need a multidisciplinary team, capable of working with objects that were left behind and resisted the passage of time, such as ceramics, organic remains, soil samples, pieces of food, seeds and bones,” he exemplifies.

To illustrate this difficulty, Neves cites as an example an article published a few weeks ago in the scientific journal Nature which revealed details of two large archaeological sites of 147 and 315 hectares (an area equivalent to 205 and 441 soccer fields, respectively), including the existence of pyramids in the Bolivian Amazon.

“These earthen structures have been known for 60 years, but it was very difficult to define whether they were natural or man-made,” says the archaeologist.

“It was only possible to get this answer now, because we have a technology called “Lidar” capable of doing this type of analysis”, he points out.

The future depends on the past

So what do scientists know about the history of the people who inhabited this region?

“We know that the Amazonia was densely occupied in the past and that the people who inhabited it left very visible marks of the way of life they had, with geometric ditches and linear paths”, summarizes Neves.

“And we have data that very confidently shows us a direct relationship between the individuals who made these constructions in the past and the indigenous peoples of today.”

“It is not, therefore, about a lost civilization, which disappeared millions of years ago”assures the researcher.

According to the Scientific Panel for the Amazon, a publication coordinated by the United Nations (UN) that has a chapter on the people who lived in the region before the arrival of the Europeans, there is evidence that this tropical forest was occupied by indigenous peoples for 12,000 years.

“During this long history, indigenous societies developed technologies highly adapted to local conditions and optimized for the expansion of the food production system,” writes the group of experts headed by Neves.

“Amazonian archeology shows how deep the indigenous history of the region is, characterized by cultural and agrobiological diversity. It is one of the few independent centers of plant domestication on the planet and one of the earliest centers of pottery production in the New World.

“All of these technologies can inspire new forms of urban planning, waste management and integrated land use systems,” the authors conclude.

For Neves, this set of evidence allows us to see the Amazon as a “biocultural heritage”with an interaction between human action and nature for millennia.

“That is why, to protect the Amazon, we need to strengthen local populations, such as the indigenous peoples, the ribeirinhos, the quilombolas and the caboclos, because they have a very important role in the construction and maintenance of this biocultural heritage”, concludes the archaeologist .