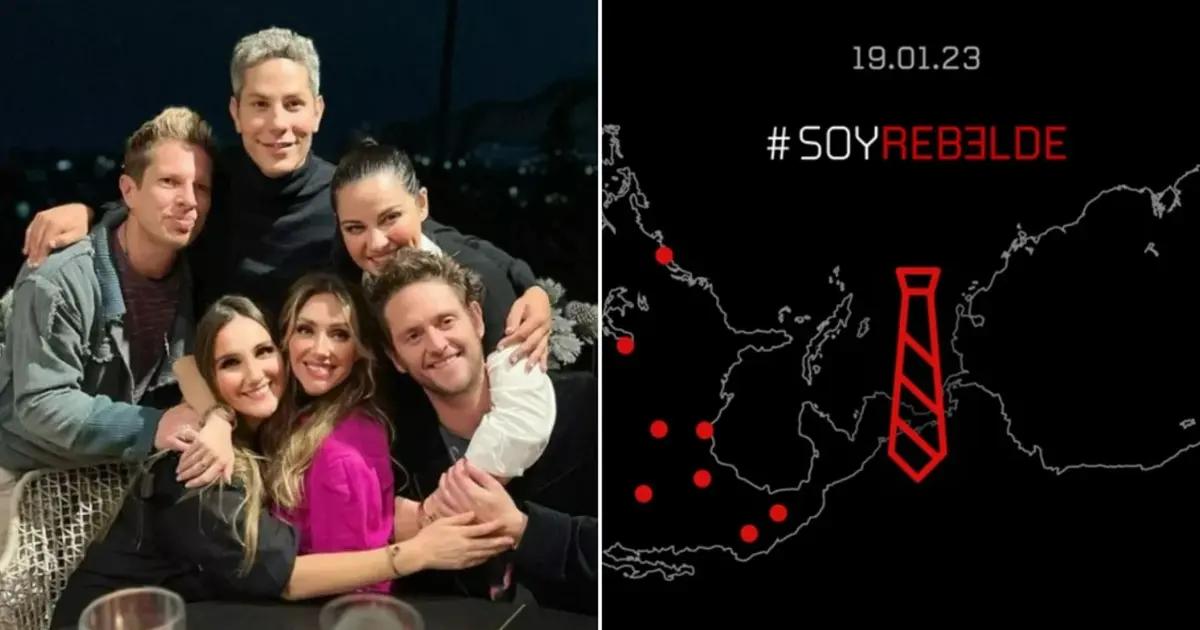 It was in December 2022 when Dulce María, Anahí, Maite Perroni, Christopher Uckermann, and Christian Chávez surprised their fans with great news: RBD will return to the stage without Alfonso Herrera. As expected, their announcement caused a sensation on social networks, sparking endless speculation about the venues where they will perform and when ticket pre-sales will begin.

Although the Mexican artists assured that they would announce all the details of the Soy Rebelde World Tour through their official website on Thursday, January 19, at 7:00 p.m. (Central Mexico time), they could not escape rumors and alleged leaks. Not only the venues where the show will take place were revealed, but also the starting date thanks to Christopher Uckermann’s mother.

According to social media users, Alexandra Von Uckermann reportedly revealed that Soy Rebelde World Tour would begin in October of this year in a post she made on Twitter about the impact the pop group had on their fans, although it has been 15 years since they decided to continue their artistic careers on separate paths.

“It is impressive to see so much love, so many expectations, so many illusions, so much joy for the 19th. Not even in my dreams could I imagine it! Exactly what the world needs right now and that gives me a lot of joy.”

But that was not what caught the most attention, but Alexandra Von Uckermann’s comment afterward: “1 + 9 = 10″. This is how RBD’s own tweeters fans concluded that the tour will begin in October.

The reactions were not long in coming, and many users of the platform thanked Mrs. Von Uckermann for giving clues about the tour since apparently it was not the first time she leaked information about the group.

“Mrs. Alexandra, you are always giving clues and feeding my illusion, thank you very much. I send you a big hug, it’s not long now until this dream!!!!”. “10 is for 10 concert dates? 10 is for the month ten, October? 10 is for the perfect number of numerology?”. “1 announcement with 9 shows starting in October?”. “I love you so much Chris’s mommy who always gives us hints!”. “October is an important month for them because it’s @RBD_oficial world day,” fans wrote.

RBD plans to announce their tour with hype

According to new information published on the official website Soyrebelde.world, the Mexican singers will delight their millions of Latin American fans in Mexico, the United States, and Brazil. The group that released hits such as Sálvame, Ser o Parecer, and Nuestro Amor updated their fan page to invite all their followers to gather at different venues in those countries to follow the announcement of their live tour.

Among the main advertising spaces they will occupy in the United States are Times Square, Banc of California, Hush Hush and FTX Arena Screen, while in Brazil they will do something special in Praia de Copacabana and Estacäo de Sé de Metro.

Will Maite Perroni leave the tour due to her pregnancy?

According to information retrieved by the Instagram account @chamonic3, Maite Perroni will only participate in the concerts offered in the interior of the Mexican Republic to take care of her baby that could be born in the second semester of this 2023: “When they signed the contract she already knew she was pregnant and let the other members know and they accepted that Maite would not travel until she felt comfortable doing it”.