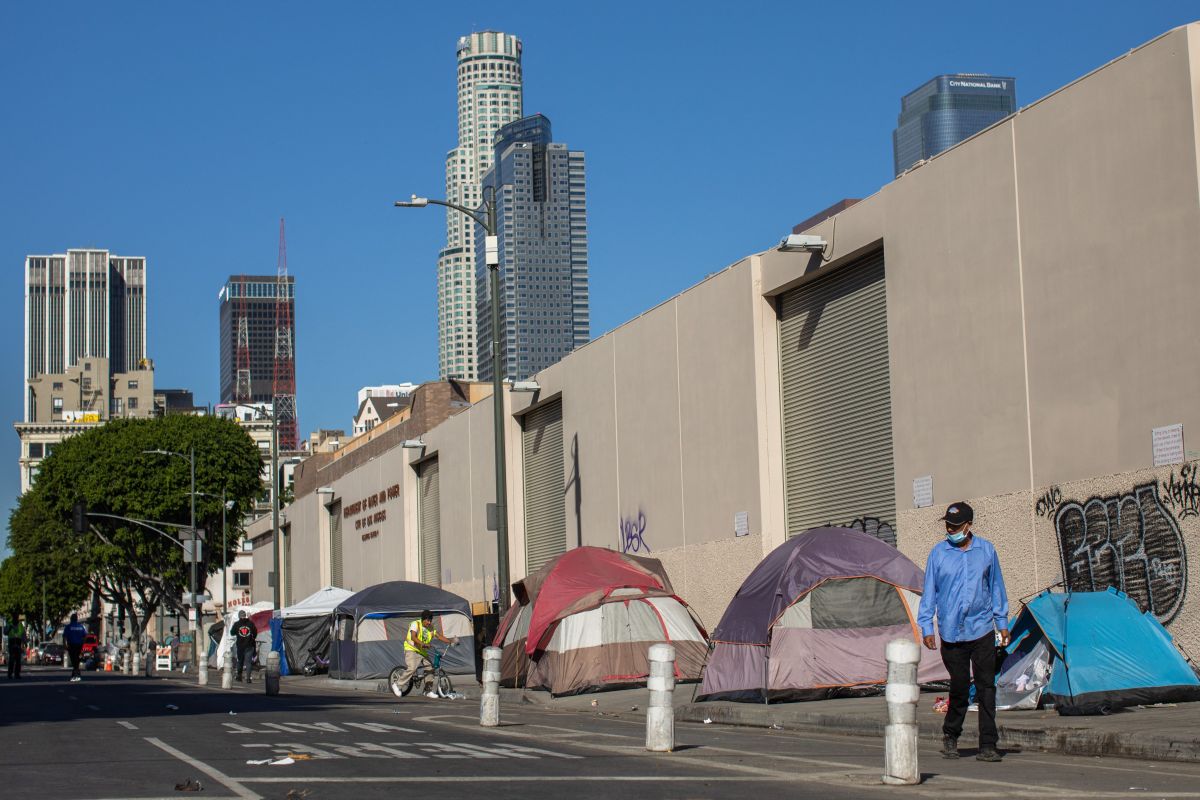 At least two recent crimes in Los Angeles committed by homeless men have brought homelessness and its relationship to rising violence into the public spotlight.

It is also common to see posts on social media by Angelenos making public that they were about to be attacked by a homeless person.

Some leaders attribute the violence perpetrated by the homeless to a lack of timely mental health services.

On January 13, a homeless person killed a nurse at the Los Angeles County Medical Center and the University of Southern California at a downtown bus stop.

Sandra Shells, 70, was waiting for her bus at a stop near Union Station, on Cesar Chavez and Vignes streets to go to work, when a homeless man attacked her and fell to the ground, hitting her head.

Shells, who had a 30-year career as a nurse, died at the hospital.

Police arrested 48-year-old Kerry Bell near the scene of the attack, and he was charged with Shells’ murder.

On January 13, Briana Kupfer, a master’s student at the University of California, Los Angeles, was attacked by a homeless man while working at a furniture store on North La Brea Avenue.

A week later, after an intense search, Shawn Laval Smith, 31, was arrested and charged with fatally stabbing 24-year-old Kupfer.

The student was alone in the store when she was attacked by the homeless man, in an attack that according to Los Angeles Police Department officer John Radke was apparently random, without any provocation.

In fact, before being fatally assaulted, Kupfer sent a text to a friend to tell her that someone who gave her bad vibes had entered the store.

“Unfortunately, that person did not see the text right away,” Officer Radke said.

His body was found 15 minutes after the text was sent.

Heidi Marston, executive director of the Los Angeles Homeless Services Authority (LAHSA), called the killings tragedies. But she said that it is important not to blame the entire homeless community for the violence or confuse the homelessness epidemic with attacks.

“It’s not going to bring justice to the victims of these crimes,” he said.

According to LAHSA numbers, there are currently about 63,706 people experiencing homelessness in Los Angeles County, a 13% increase from 2019.

The 2021 homeless population count was canceled due to covid-19, and rescheduled for this year.

But due to the wave of new infections caused by the Omicron variant of covid-19, it was postponed to take place between February 22 and 24. It was initially scheduled to take place from January 25 to 27.

The The latest report shows that 14,284 of the people without shelter, 32% of the total, reported using drugs, while 26%, 11,711, reported suffering from long-term mental health conditions..

Evelyn Alemán, community defender and member of the volunteer group LA River Walkers and Watcherssaid homelessness is out of control in Los Angeles, compounded by a lack of timely mental health services.

“In the river we have seen people with weapons and machetes. And there was already a homicide. A lot of the homeless use drugs or have mental health issues, or both,” she said.

The problem is that when they report that someone is waving a machete, the police do not arrive in time because these homeless people move around a lot.

But the most serious thing – he said – is that when they call mental health services, they run into many obstacles just to be able to speak to someone on the telephone line.

“When they finally serve us, they arrive at the site a week later, when the homeless person with problems has already left.”

Alemán said that their intention as a group is to prevent a tragedy, and prevent a homeless person from going and killing an innocent citizen, or another homeless person, because there is also violence between them.

“It is urgent that there be more effective and faster mental health services, and more prevention to avoid a tragedy.to”.

Alemán questioned how long the authorities will act.

“How many homicides there have to be, how many more assaults for there to be a prevention system. Give us a phone number where they answer. They are not responding with the urgency that the problem of homelessness requires.”

And he recalled the recent case of Eduardo Enrique, a 41-year-old immigrant from Peru, who suffered from severe incontinence, diabetes, drug addiction, among other problems such as not being able to move, and died alone in December in the Los Angeles, because there was no support system to help him get back on his feet.

“It is sad to see how humanity has reached these extremes”

The group of neighbors of which she is a part is dedicated to cleaning the river and the nearby bike path, but every time they come across homeless people who live there.

“The risk of a homeless person attacking you has always existed, but it is now more present due to the disproportionate growth of the homeless population and the slowness in receiving mental health and addiction support,” he said.

According to an Associated Press (AP) analysis based on data from the Los Angeles Police Department (LAPD), homeless people were suspected in 43 of the city’s 397 homicides last year. It is about 11%.

Over the past five years, the percentage of homicides in Los Angeles in which a homeless person was the suspect ranged from 6.5% to 12.9%, according to AP analysis.

However, the frequency of cases in which a homeless person was killed, amounted to 10% in 2017 and has increased every year since.

Captain Adrián González of the LAPD Homicide Division said that in general, there is an increase in aggressions in the city, by people who think there are no consequences.

“An argument can lead to a murder as we saw the recent case of a Taco Bell employee, who after an argument with a customer, he took his life.”

The captain, an expert in homicide investigations, said that he does not know what the causes of so much aggressiveness in the Los Angeles environment are, from the pandemic.

“It is a combination of factors, but the recommendation is not to give rise to confrontations. If you are walking in the street and see a person who may represent danger, it is better to cross the street; and the same thing when we are driving, let another driver get in our way, because we don’t know what can happen if we get into a lawsuit with that person”.

He even regretted that at this time, it is no longer even possible to disagree on political issues and continue to be friends or family.

“We live in times when you can no longer talk or agree. It is no longer accepted to have different opinions.”