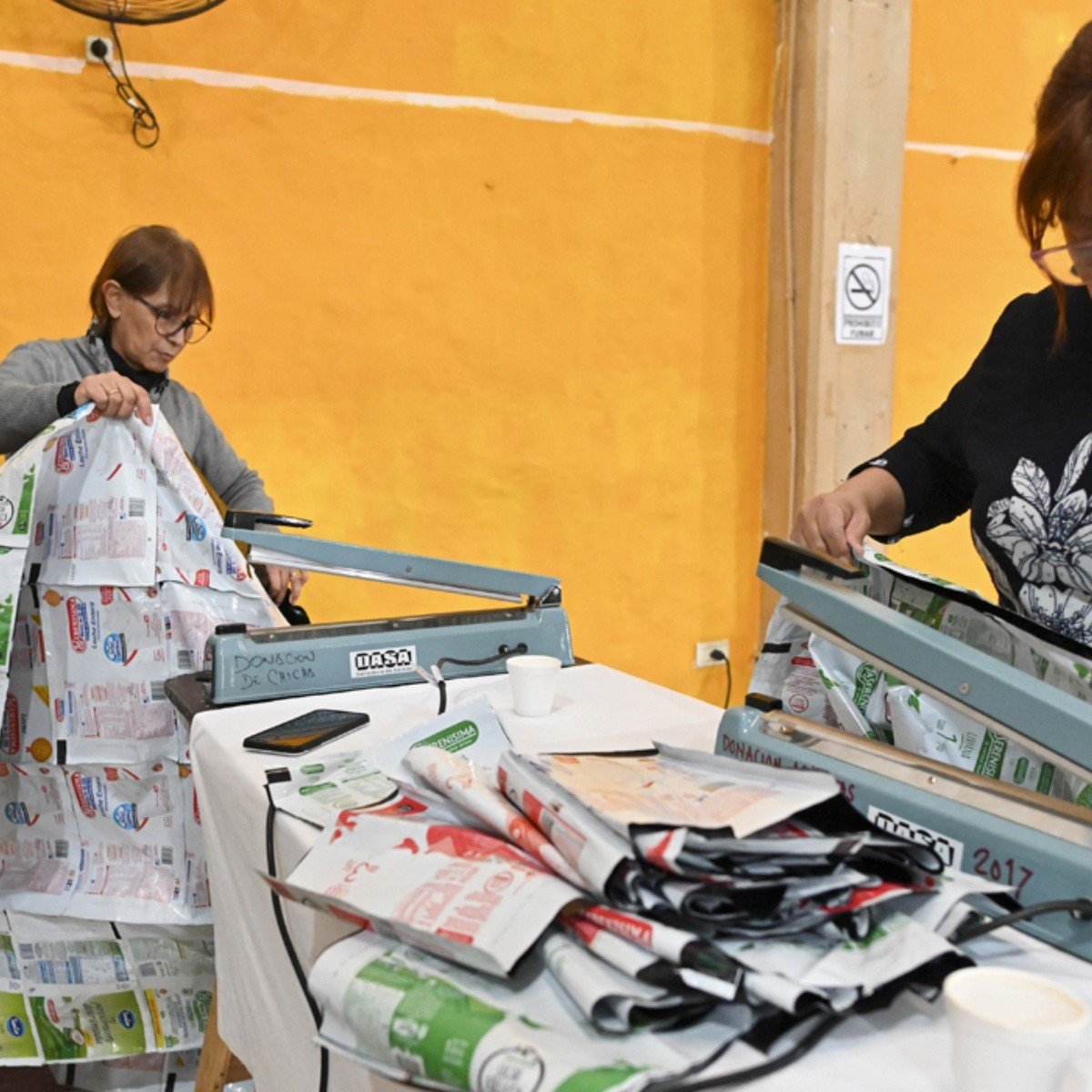 A woman huddles against the gate of a church in Buenos Aires, another at the entrance of a bank, some choose the square of a train station and others the busy hallway of a hospital to withstand the arrival of winter outdoors.

Tonight they receive hot soup and blankets made with recycled milk sachets, a palliative to face the temperatures that in Buenos Aires and its outskirts They usually go down to zero degrees and pierce the bones with the humidity and the wind of the southern winter.

The women of the non-governmental organization “Giving a hand” deliver the insulation produced by the volunteers of La Sachetera, another NGO that since 2012 has been manufacturing sleeping bags, tents and ponchos – all with milk sachets – to protect those who sleep in the street.

“They are waterproof products, what they do is isolate people from moisture. Buenos Aires is very humid and that allows them to wake up dry,” Gabriela ‘Goga’ Dodero, a 52-year-old mother of two and a mentor at La Sachetera, told AFP.

To produce the insulators, the La Sachetera volunteers meet once a month at the Güemes club, a modest institution in the town of Villa Bosch, northwest of Buenos Aires. They need about 80 sachets for each sleeping bag, about 200 for a blanket 1.80 meters per side.

“Among the different groups we make about 600 products a year to distribute. We also coordinate with other campaigns, such as the one of the Espartanos Foundation, of people who are in jail and produce 2,000 insulators per year,” he says.

Dodero highlights the ecological purpose of the enterprise that seeks to reuse milk and yogurt sachets, “recyclable polyethylene bags that are sealed by heat or sewing,” he explains.

“When we started 10 years ago, the sachets were not recycled, they went to the trash. We found a system to be able to reuse them and now the sachets already have a recyclable logo,” she says. But many Argentines remember when their grandmothers made shopping bags out of crocheted strips of milk sachets.

Against rain and hypothermia

In the town of San Fernando, some 25 km north of the Argentine capital and bordering well-off neighborhoods, about twenty people live on the streets and receive a “very complete breakfast” every Sunday that the women of “Giving a Hand “, an “apolitical and non-religious” organization, says its leader Débora Levy, 57 years old.

Some already know those blankets of milk sachets from previous years but lost them either due to wear, theft or because sometimes the police take away their few belongingsthey tell AFP.

“I am grateful to the guys who give us a hand, who give us a plate of food, a coat or insulation. It is very important for us who spent 24 hours on the street for many years,” says Cristian Pol Ramírez Soria, a 40-year-old Uruguayan.

Lying under blankets on the steps leading to a theater, a shelter he shares with two other men, he assures that the insulation “is useful when it rains, so that we don’t get soaked and it protects us from dying of hypothermia.”

According to the volunteers, the number of homeless people has grown in recent years.

According to data from the Buenos Aires mayor’s office, the capital of three million inhabitants had 2,573 homeless people in 2021, a figure questioned by social organizations that claim to have registered 7,251 people in 2019.

It is estimated that there are five times more in the outskirts of the capital, where 11 million people live, points out a recent article by Juan Carr, founder of the NGO Red Solidaria.

In 2020, the extreme poverty rate reached 6.3% in Argentina and was located in the middle of a list of a dozen countries in the region, with Uruguay having the lowest rate (0.3%) and Colombia with the highest (19.2%), according to estimates by the Economic Commission for Latin America (ECLAC).


After the Yellow Alert in Cuajimalpa, reports C5 flooding on the Mexico-Toluca Highway