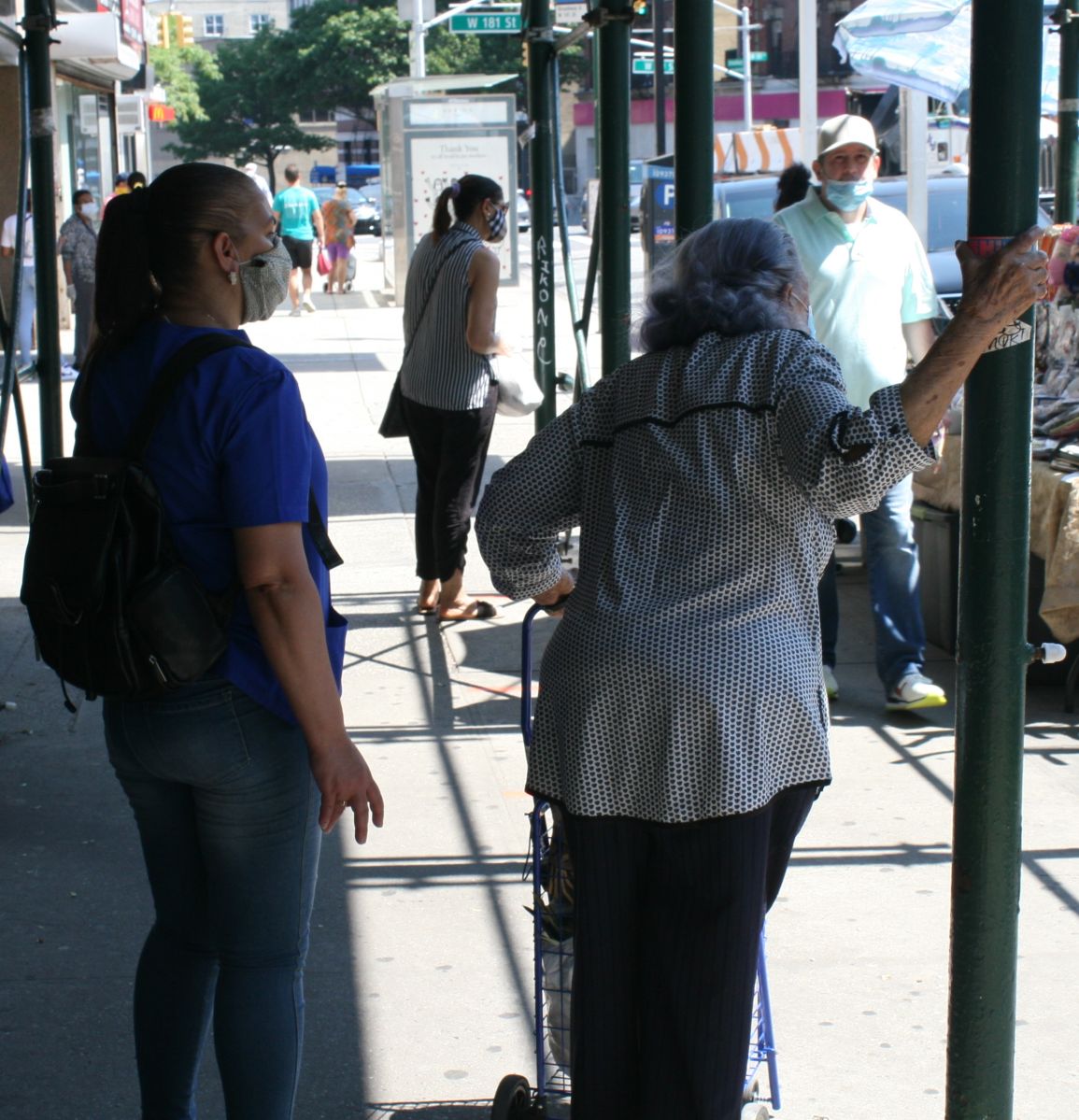 The COVID-19 pandemic He still doesn’t seem to want to cross the corner, and after more than 20 months After the emergency has been declared in New York, the blows left by the coronavirus continue to become more evident in different areas, and one of them has been the home care industry for the elderly and sick.

And it is that according to patients who require special care at home, due to their age and medical conditions, such as Rachel Rodriguez, 70, a lack of staff has meant that the hours of care she used to receive on a weekly basis have been drastically reduced. Hence, the quality of the city.

“I had been authorized 35 hours of care and since the pandemic began, days have passed when I do not receive anyone to help me and take care of me, because they say that there are no people who come and speak Spanish,” said the Latin grandmother. , who suffers from diabetes, and also cannot bend or walk alone. “I know that COVID hit us all hard, but there should be a plan So that the home attendants want to come to work, because the last two girls who took care of me told me that they left, because they were paid only $ 15 an hour and it was better for them to go to a restaurant to earn a tip. And they have all the reason”.

Virginia Burgos, who works looking for home caregivers in the care services company Pella Care of Brooklyn To serve customers who need them, he assures that currently the reduction in the workforce in that industry has been almost 50%, which is why it is more difficult for these companies to find personnel.

“We have seniors (older adults) who are the most vulnerable people with all this pandemic, and it has become a challenge for us to find caregivers. We almost have to take them out under the stones in the face of so many cases and needs that exist in the city ”, assured the Ecuadorian, warning that the crisis had already begun before the COVID pandemic.

“A few years ago we had staff shortage problems in a 20 and 30 percent And now the problem has been duplicated, because there are situations in which I get a case, I pass it on to the agency and I don’t have home attendants to do the job. That is why the authorities have to act and make immediate changes, giving better conditions and raising salaries, “added the person in charge of dealing with clients and caregivers. “Companies aren’t doing much to attract more staff either, and even those that offer to pay $ 20 an hour and even pay the costs of the training course for new caregivers, which can be worth between $ 600 and $ 1,000They are also facing difficulties ”.

Burgos insisted that the Caregiver Industry Crisis Must Be At The Center Of Talks In Albany and the federal government to put a stop to the decrease in the quality of the service and to be able to assign each patient the care they deserve, since it highlights that there are elderly people who request the program and receive only 9 hours a week of care: that is, 3 days a week. a week, only 3 hours, which qualifies as unacceptable.

“It is a matter of the laws, the health authorities and the companies. We have a system where nobody is controlling what is happening to the point that, for example, I have the case of an elderly patient, with multiple sclerosis, who is high risk and after qualifying, they sent her a caregiver who was not vaccinated ”, added the expert. “Both Medicaid and the State Department of Health have to take a good look at what they are doing. They need to sit down and talk with the authorities, be more demanding and aware of the agencies, optimize resources and motivate caregivers and give them emotional support as well ”.

Complaints about the havoc that the industry is suffering were also included in a report by the organization “Consumer Directed Personal Assistance Association of New York State (CPAANYS), where it was revealed that a large part of the older population of New York is “seeing the green and the ripe” to keep their caregivers or find new ones.

The salary appears as one of the main reasons for the stampede while, according to defenders of a better labor treatment to the “home attendants” it is not being contemplated by Albany.

The report assured that the situation is so critical, that approximately the 74 percent of the elderly and patients with disabilities are unable to retain their caregivers, with meager wages as low as $ 12.50 an hour in Upstate and $ 15 in New York City.

“It seems to me the height that we, with a responsibility as great as the one we have when we do that work, which is the life and care of someone in our hands, we are paid the same as a dishwasher, without wanting to detract from that work” , said Karen Blanco, who worked as a caregiver for several years and after the pandemic chose to live on unemployment insurance until last September, and is now a waitress in a restaurant.

“The State must start immediately by raising the salaries of caregivers, because if that does not happen, more people will leave those positions and patients will see dire consequences for their health and care. Because a home attendant is often the one who takes care of, sweeps, maps, cooks, washes and even as a psychologist, you have to do it, “added the Dominican, who says she does not want to return to her old job if there are no radical changes.

Jessica Huamán, who worked for more than five years as a caregiver for the elderly, and who retired three months ago to work in clinical services, stated that she left the “home attendants’ industry because the salary and labor benefits offered to her in her new job were a lot better. The former caregiver added that in addition to low wages, another component that causes many workers to leave the business is the treatment they receive and the lack of basic protections such as health insurance.

“There should be better salaries, obviously, because the responsibility of our work is great, but also we are always exposed to humiliation and offenses from some patients who literally believe that we are their maids. There is a lot of exploitation and it does not matter if we get sick or not, and we do not receive protections if we must stay at home because we feel bad, so there should be a reform that includes better salaries, health insurance and job specification, “said the immigrant, who In 2020 he fell ill with COVID and suffered facial paralysis, without any help for his treatments.

The report of Consumer Directed Personal Assistance Association of New York State He also pointed out that due to the lack of staff, many patients have had to reach into their pockets and pay extra costs to retain their caregivers, since the funds given by Medicaid, which mostly pays for the care program, do not allow decent salaries. It is estimated, according to the report, that clients should collect between $ 200 and $ 500 per week to supplement a better payment to those who are still working as caregivers, who in more than 40 percent live in poverty levels or close to poverty because of the low salaries.

Albany legislators as the state senator Rachel May and Assemblyman Richard Gottfried, They are trying to put the problem to rest, with an initiative that aims to increase the salaries of caregivers to a minimum of $ 20.50 the hour or that your floor is 150 percent of the minimum wage.

Despite the discontent manifested and the difficulty of older adults to retain their caregivers, the City of New York ensures that the elderly who receive care services with its programs have not been affected with interruptions, due to the pandemic.

State authorities seem to have a similar position, and without giving credit to the crisis that other voices denounce, they assure that there is a commitment to ensure that all those older adults and people who need home care services have them.

“The New York State Department of Health is committed to ensuring that New Yorkers have access to quality home care services,” he said. Jeffrey Hammond, spokesman for the State Department of Health, who runs these programs. “Home care is a health service that is provided in the patient’s home to promote, maintain or restore health or lessen the effects of disease and disability.”

That state agency added that the authorized home care services agencies (LHCSA employ many of the home care aides, and that the LHCSA’s HERDS survey that they conduct each week, revealed that as of November 30, 2021, currently there are 269,700 total employees in that industry, of which 251,785 are direct care personnel, which includes registered and licensed personnel.

The Department of Health added that according to the survey, there is a response rate of 76%, However, they admitted that the numbers do not reflect the entirety of caregiver assistance, as there are personal assistants who provide care in the Consumer Directed Personal Assistance Program, as well as assistance that provide care to residents in Assisted Living Programs. (ALP) and a small number of hospice assistants, employed by those institutions.

The NYC Caregiver Industry in Numbers