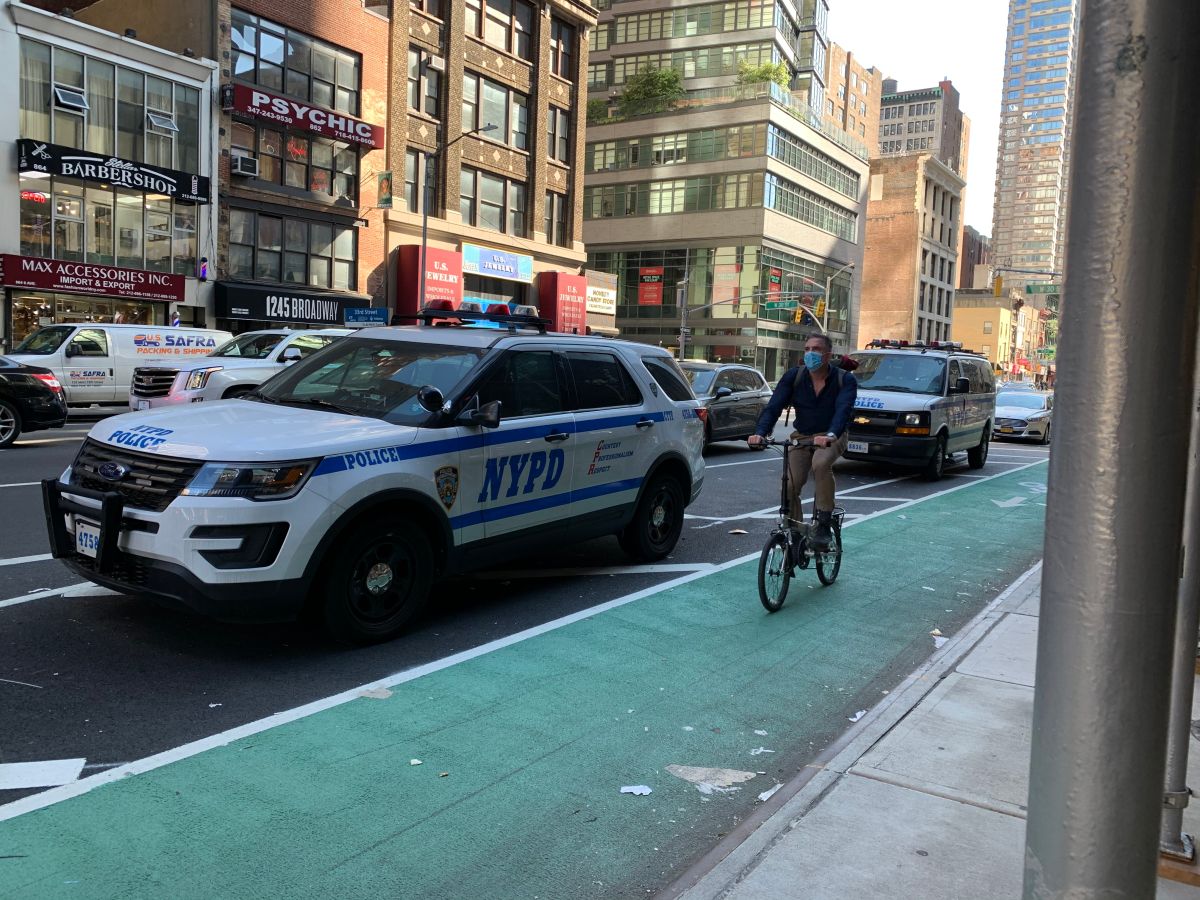 The NYPD cops who allegedly lie in the midst of investigative processes in the Civil Complaint Review Board (CCRB)Most of them are not held responsible for their actions or receive any type of punishment, and on the contrary they continue to be part of the Uniformada without legal or disciplinary consequences.

This was reported on Tuesday by the organization LatinoJustice PRLDEFafter presenting a report in which, with data in hand, of cases that occurred between 2010 and 2020, indicate that the officials of the New York Police Department (NYPD) who lied to the CCRB were rarely sanctioned by the City police agency.

The report indicates that LatinoJustice was able to determine the nature of the lies in 170 of the 181 cases analyzed and mentioned that in 116 cases, the accused officer “simply denied” what had been said against him, even denying having been at the scene, no consequences.

“Thirty-three officers admitted what they had done but lied to create a justification
for doing so and 21 of the 181 of the officers lied simply to protect another
officer, often without being accused of any misconduct themselves,” the report said.

Furthermore, the document highlighted that nypd it also fails to reveal officers’ backgrounds to criminal defendants, denying them a fair trial.

According to the report, called “Shielded from Liability: How Do NYPD Officers Get Away With Lying to the CCRB?”officers who dishonor the truth when prosecuted by the agency, created to investigate and prosecute complaints of misconduct by the New York police, mostly come out clean.

The study, which analyzed 144 cases in the Civil Complaints Review Board (CCRB) with 181 police officerswith obvious signs of having lied, who in the end were not fired or sanctioned for their actions, made LatinoJustice demanded reforms to the disciplinary processes of the NYPD.

The report pointed out that there is a systematic handling of this type of false statements that end without punishment, as happened last January, when in a case of arrest of a 16-year-old boy, the police assured that the minor had rejected the orders of the agents and fired a weapon at a uniformed officer, but when reviewing the images from the body camera, a court in the Bronx showed that there was no “legitimate reason” for officers to detain the teenager, who followed all directions given to him by the NYPD.

According to LatinoJustice PRLDEF, has long been “an open secret that the NYPD almost never disciplines officers who lie”.

After the analysis of the 144 cases, the report managed to show that in more than half of the investigations sent by the CCRB, the testimony of an officer was contradicted by video or audio images. Likewise, in other cases the lies of the police officers were evident after observing police papers and reports or the testimony of other uniformed officers.

“Nearly half of the officers who lied to the CCRB were never punished, not even for the misconduct they lied about,” the report said. “In the five cases in which the NYPD disciplined an officer for his statement to the CCRB, the charge was downgraded to ‘misleading’ and no officer was fired.”

The report alarmingly noted that a total of 97 cases in which there was video or audio evidence that officers lied, nearly 40% of them They did not receive any type of sanction, 24% were educated with disciplinary actions, 25 missed vacation daysand alone 3 were suspendedwhile five resigned or were pending resignation.

As to 32 cases in which there was documentary evidence that the officers lied, 18 of them, that is, more than 50%, did not receive any sanction, 2 were instructed with disciplinary action, 9 lost vacation days, none were suspended and 3 resigned.

The report also showed how in 30 cases in which there were NYPD witnesses who corroborated that the agents lied, 10 did not suffer any consequence, 8 received disciplinary instruction, 7 lost vacations and only 1 was suspended. And of 14 cases in which civilians evidenced that the agents lied, nothing happened to eight of them, 5 were disciplined, one lost vacation, and none was suspended.

Of the total of 181 police officers investigated who lied80 did not face any action against them and continued in the Uniformed, 42, that is, less than 25% received disciplinary instructions, 43 lost vacation days, only 4 were suspended and 12 resigned pending resignation.

“For too long, NYPD officers who lie during investigations into their conduct have had no repercussions.which in effect encourages officers inclined to lie to continue doing so,” he said. Lourdes M. RosadoPresident and General Counsel of the LatinoJustice PRLDEF organization.

“The Department’s disregard for evidence of lying by officers not only violates its stated policy, but it means future defendants are denied a fair trial when officers’ lying histories are not revealed. The NYPD must demonstrate that its policy that willful misrepresentations will result in termination is not itself a lie,” Rosado added, warning that for years, police chiefs “have turned a blind eye” to lying officers, for which he urged legislative action.

“The process for holding officers who lie to the CCRB accountable is broken. We call on the New York State Legislature and City Council to work together to change the laws so that the New York Police Commissioner is not the only entity authorized to discipline New York police officers. New York,” Rosado said.

Andrew Casea lawyer for LatinoJustice, one of the authors of the report, demanded that the NYPD police follow their own protocols and fire the lying officers.

“There is clear and indisputable evidence that these police officers are betraying public integrity and trust and blatantly lying in official proceedings.. This is a disgusting and habitual practice that must end now”, commented the defender.

After hearing the report, the NYPD dismissed the veracity of the report, because he stated that it is full of inconsistencies and falsehoods. At the same time, the Uniformed assured that it is not fair to blame the NYPD for actions of the Civil Complaints Review Board (CCRB).

“The report by Latino Justice, an advocacy organization, It is by no means an objective examination of the facts. It is riddled with inaccuracies and fundamental misunderstandings of the processes between the CCRB and the NYPD,” the New York City Police said in a statement.

“Among the many falsehoods in the report is the assertion that an officer who denies an allegation for due process is itself a ‘false statement.’ Another basic mistake is blaming the NYPD for failing to act in cases where the CCRB has failed to act due to CCRB delays in completing investigations or failure to move forward with prosecutions.” added the NYPD.

The Office of Mayor Eric Adams chose not to refer to the report and preferred that the matter be answered directly by the NYPD.

Data from the LatinoJustice PRLDEF report

5 recommendations from the LatinoJustice report on police officers who lie