The brand new jury of “Peru has talent”, Ricardo Moran, continues in the eye of the storm due to the possession of her two children, Emiliano and Catalina, born by surrogacy in the United States. Recently, the producer also answered some questions from his followers on Twitter.

Through his social networks, Morán explained that he is solely responsible for the minors, because the egg and belly donors renounced their right two and a half years ago when the procedure was carried out.

“Both legally waived in front of a judge any right. The judge handed down a sentence leaving exclusive paternity to me. There is nothing more to discuss”, he wrote in his first tweet.

“Parents are the ones who raise. Anonymous untraceable without knowledge or interest of where their eggs went, they are not parents “added Ricardo Morán when responding to a Twitter follower who asked him about the “mother” of his children.

Likewise, Ricardo Morán explained that a year ago he had to leave Twitter to ensure his peace of mind and mental health. This confession came after a user of the social network highlighted the patience of the producer in the face of so many criticisms.

“Last year I had to get off Twitter and take care of my sanity. This environment is toxic, but from time to time an idea creeps in, a gold nugget rolls among the tweets and we learn something “, he specified. 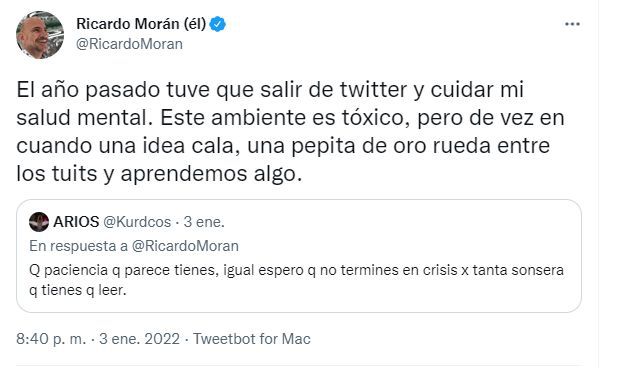