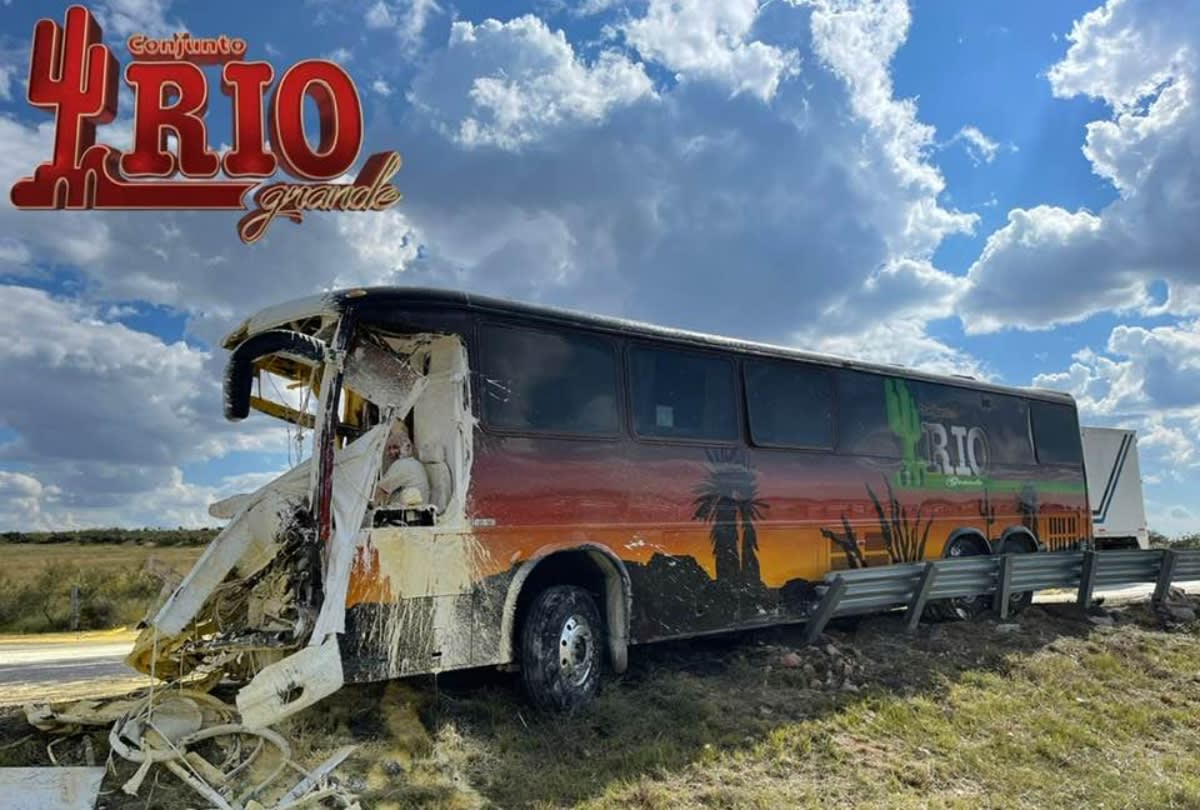 Conjunto Río Grande suffers spectacular accident in Mexico. The group was traveling in its bus on Mexican roads, when it hit a truck, so the front of the vehicle was completely destroyed.

This Saturday, September 11, the band group confirmed that they had suffered a traffic accident, but also indicated that the lives of all the band members were out of danger.

“Fortunately, all the members as well as part of the staff are doing well, resulting only with blows,” they confirmed in the text published through their official Facebook account.

Everyone from the Río Grande Complex is safe

After confirming that everyone was fine, they took the opportunity to thank their followers for their love. “We thank you in advance for your expressions of affection and concern for us. A thousand blessings for all ”, closes the statement.

For its part, the entertainment account @ chamonic3 indicated that the bus in which the group was traveling crashed into a truck of those that paint the signaling lines on the tracks. In this way, the occupants ended up covered in paint.

The photos of the accident confirm it

In a second publication, Conjunto Río Grande shared a series of photographs that confirm Chamonic’s version. The first thing you can see is the front of the bus completely destroyed.

However, what is even more striking is how the wrecked vehicle and its passengers are painted yellow and white, the two colors with which road signs are usually painted.

“Thank God it did not happen to adults”

In a short video, recorded from the scene of the accident, one of the members confirms that they are all alive. “It was an outreach, we reached workers here on the highway, but more than anything to clarify that in the networks it was commented that some of us had already lost our lives and thank God it did not happen to adults, we are fine,” he said. .

“Some blows we gave ourselves, the fright… The one who was hit a little bit more was Abelito, the ambulance already took him away. He broke, his right arm was fractured and a blow to the head, but nothing more serious than that ”, he confirmed. SEE FULL VIDEO HERE.

As soon as the news was released, the followers of the group sent them blessings and thanked them that it was nothing more than a scare. “Blessings, Great Friends, Cheer up, We are with you !!!!!”

“A big hug for everyone and that the Rio Grande Ensemble continues to play”, “Thank God that they are well and everything is in the scare spirit and that the river continues to sound”, “May God always bless you and hope you are well, Courage “,” God Take Care of You And Good That Everything Is Coming And That Avelino Soon Comes Up From His Hand “, they commented.

“We already expected them”

Of course, the inconvenience affected their schedule of presentations and so they were made known by some fans who already longed to see them. “Well, I was looking forward to seeing them again. But thank God that he is well and that he was only left in shocks and blows. May God take care of you and always bless the staff and you Rio Grande ”, wrote Verónica Álvarez.

“Very unfortunate what happened … We were already waiting for you … May God bless you … and may there be many more successes … Greetings from Rio Grande …”, “We were ready for your event today here in San Luis but your health is first a thousand blessings” , “We are delighted to know that you are doing well. Thanks for informing”.

Only material things were lost

There were many who thanked everyone that they were well and reminded them that the losses were only material. “God bless you and thank God it was pure material damage”, “Thank God all are well, the material is recovered! Courage friends ”.

“My father God covered them with everything bad boys we love them very much it is a miracle they will be fine as they want the material is replenished they are ALIVE is what really matters gentlemen blessings”, “The bus is material compass life is first thank goodbye They are fine and the other groups will give donations for a bus, they are very grateful and they are very sociable, cheer up !!! ”, the Internet users encouraged them. Rio Grande Complex suffers spectacular accident in Mexico.