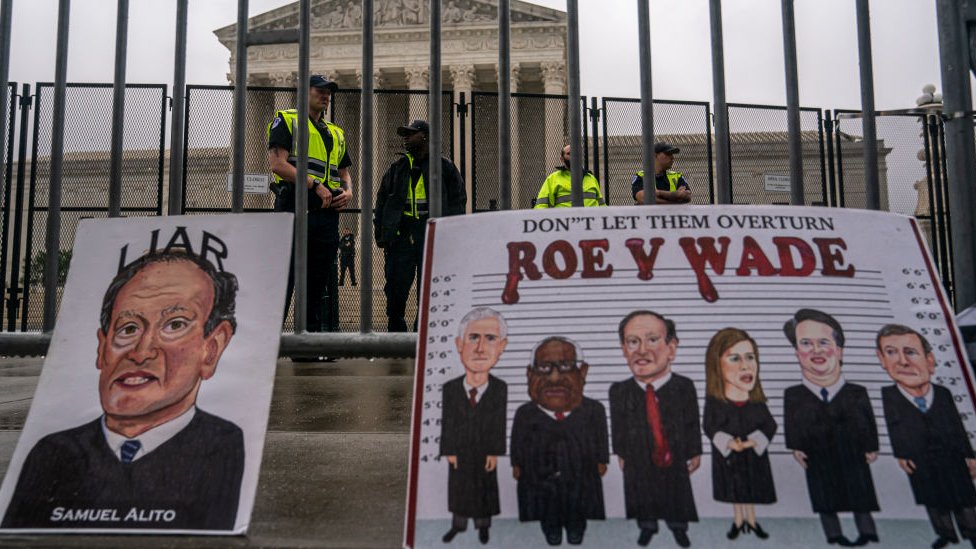 After almost half a century in force, the Supreme Court of the United States revoked this Friday the constitutional protection of the right to abortion.

It did so by overturning the landmark 1973 ruling known as Roe vs. Wadea legal precedent that guaranteed it.

Through these five questions we tell you what the conservative majority court has specifically decided, what changes and what consequences it has for millions of women in the US.

1. What exactly did the US Supreme Court rule?

With the decision supported by the majority of the court’s conservative judges, the legal precedent that made it impossible for states to prohibit the procedure while the fetus was not viable outside the womb (what today is considered to occur around the 23rd week of pregnancy) is annulled. .

The origin of this Friday’s Supreme Court ruling dates back to a specific case, Dobbs v. Jackson Women’s Health Organization, challenging a Mississippi law that prohibits abortion after 15 weeks, even in rape cases.

Lynn Fitch, the attorney general of Mississippi, asked the Supreme Court to uphold her state’s law and strike down the landmark decision. Roe vs. Wade. And this Friday the conservative majority of the court supported the Mississippi law with 6 votes in favor and 3 against, and repealed Roe vs. Wade by 5 votes to 4.

“What this decision does is eliminate abortion as a constitutional right“, Grace Howard, an expert in the criminalization of pregnancy at San José State University in California, explains to BBC Mundo.

Such protection originated in 1973, when a majority of judges appointed by Republican presidents They interpreted that the 14th Amendment to the Constitution, which recognizes the right to privacy, also included the right of women to terminate pregnancy.

The new decision reverses this criterion and returns to the state authorities the decision to prohibit or allow abortion.

“It means that already there is no threshold of federal protection on how states can regulate or ban abortion. Now states can do whatever they want on the abortion issue,” Howard explains.

“If individual states want to override the rights of the person who was pregnant, they can. If they want, they can make abortion completely illegal under all circumstances, but they can also make abortion free and available to patients who want it.” The Pregnancy Police: Conceiving Crime, Arresting Personhood.

2. What changes now with this decision? Does illegal abortion become Eunited states?

The decision does not imply that abortion per se becomes “legal” or “illegal” in the US as a nation.

“As the US is a federation, each state has the power to decide on those matters that are not considered as rights or duties protected by the Constitution of the country”, explains Howard.

For the expert, the changes that the decision may imply can involve political, social and even economic factors:

3. Which states have already banned abortion, which are expected to and which are not?

Missouri and Texas have been the first to restrict abortion immediately after knowing the decision of the Supreme.

They have done so through separate trigger laws, also known as activation or “trigger” laws, designed to take effect automatically or through rapid state action once constitutional protection is removed.

There’s others 11 states that have laws of this type prepared to limit the termination of pregnancy.

Meanwhile, in 16 states, including New York, California and Washington, authorities have passed triggering laws to protect the right to abortion.

The limits on abortion that will be imposed will also depend on the states: while some will allow some conditions (such as cases in which the life of the mother is in danger) in others, such as Ohio, it will be prohibited even if the pregnancy is the result of rape.

According to the Guttmacher Institute, some states such as Alabama, Arizona and Arkansas will prohibit it from the beginning of the pregnancy stage. Others like Georgia, Idaho, Iowa and Kentucky will do so starting at six weeks of pregnancy.

Although they have not yet officially ruled on the matter, the Guttmacher Institute predicts that the Congresses of Florida, Indiana, Montana and Nebraska will also join the bans.

4. So will women go to jail? How will abortion be criminalized in states where it is prohibited?

Many states have already passed laws that penalize doctors and clinics that perform abortions, with penalties ranging from suspended licenses to prison.

In states like Texas, doctors who perform an abortion could face life in prison.

However, a little known fact is that even with roe vyes Wade, many women have gone to jail in EUSA for the practice of abortions.

According to data from Fordham University, at least 413 were imprisoned between 1973 and 2005 for this reason.

Howard fears that as a result of the current decision of the Supreme Court the number could increase.

“We have seen, even with roe vyes Wade, women accused of crimes against their own pregnancies for things like abortion self-monitoring or testing positive for drugs during their pregnancies. Even for things like surviving a suicide attempt while pregnant, ”explains the expert.

So, if these things happened with roe vyes Wadewhich explicitly states that a pregnant person has rights, when that goes away I think we can only hope to see a lot more of this,” he says.

In 1969, a 25-year-old single woman, Norma McCorvey, going by the pseudonym “Jane Roe,” challenged Texas abortion laws, where abortion was prohibited except in cases where the life of the mother was in danger.

In 1973, her appeal reached the Supreme Court, which would rule in her favor by interpreting that the right to abortion was protected by the Constitution.

“It has to be said that roe vyes Wade over time it became a very low bar: in recent decades the right to abortion has been progressively restricted in almost half of the US, ”says Howard.

Since the 1990s, numerous states have been implementing restrictions on the constitutional right to abortion, and in some, like Texas, it was virtually impossible to have one even before the Supreme Court decision.

In others, like mississippithere was only one clinic that facilitated abortion in operation for the entire state.

In more than twenty states there are requirements, such as that young pregnant women involve their parents or a judge in their abortion decision. Others have introduced waiting periods between the time a woman first visits an abortion clinic and the actual procedure.

“As a result, many women already had to travel further and pay more and this makes the poorest women and African-American women the most affected,” says Howard.

According to the Guttmacher Institute, an NGO that supports abortion rights, more than 4,000 women each year are unable to have abortions in the US as a result of restrictions already in place.

6. Can Congress legalize abortion in the US?

For almost 50 years, the decision to roe vyes Wade it marked the practice of abortion in the United States and it was not considered necessary to make it a federal law that would apply to the entire country.

The United States Congress could pass a law that guarantees the right to abortion in the country and state authorities would have to follow them regardless of their political orientation.

However, since it is a highly politicized topic legislation on the matter is unlikely to be approved by a majority in the Senate. This would require at least 60 votes and the Democrats currently have 50 (plus Vice President Kamala Harris).

Howard, for his part, sees a more likely scenario.

“If Republicans win the Senate by a supermajority in the next election, we can certainly anticipate a ‘fetal personhood’ bill being introduced at the federal level (considering the fetus as a human person). And, if that happens, there’s no limit to what that could mean, even for places where abortion is legal, like California or New York,” he says.