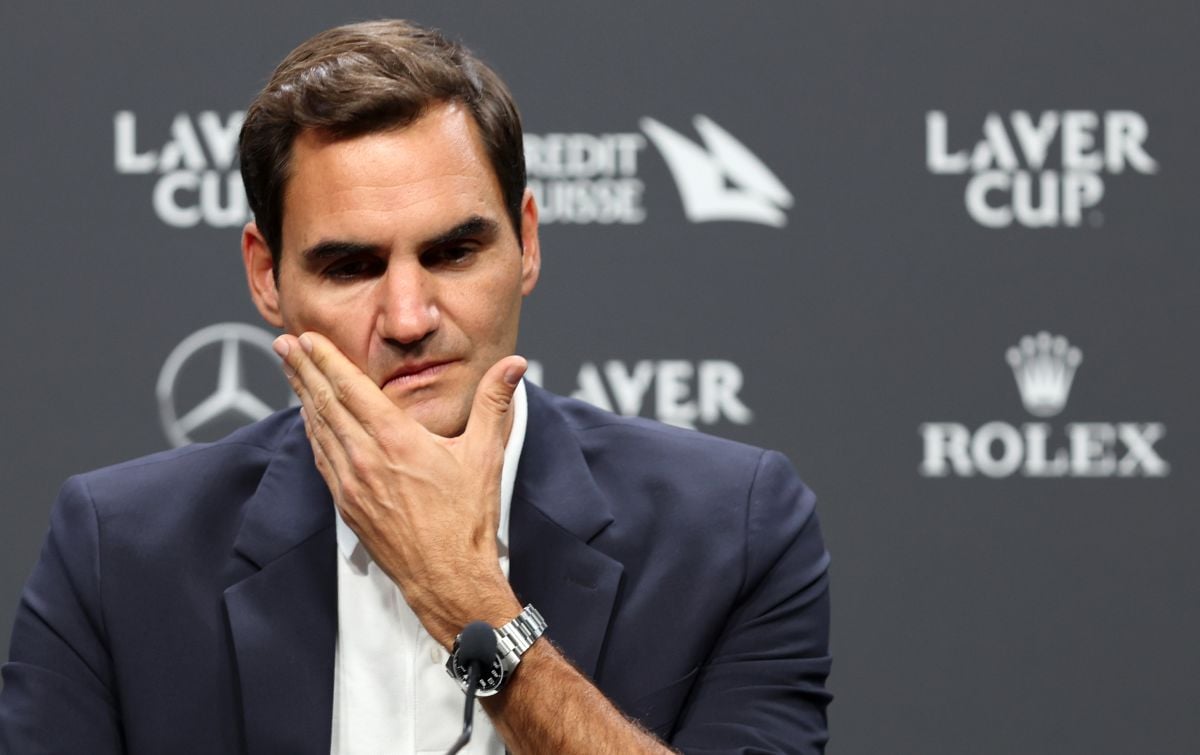 Roger Federer, one of the great legends of current tennis, recently announced his retirement from professional tennis.

And although he explained part of the reasons in his farewell letter – which was published on his social networks -, in an interview with the BBC he was much more specific about the reasons that led him to leave the circuit: “I stopped believing that I could continue Playing”.

The Swiss player, 41, told the BBC that “the last three years have been very difficult to say the least.”

The conversation with the tennis star – winner of 20 Grand Slams, including eight Wimbledon tournaments – It took place before what will be his last participation in an official tournament, the Laver Cup in London.

Federer had not played an official tournament since Wimbledon 2021, when he retired in the quarterfinals. He later underwent surgery on his knee, the third in his career.

“I knew that I was walking on very thin ice since the last time I played at Wimbledon. I tried to go back, but there is a limit to what I can do. And that’s when I stopped believing that I could actually play,” Federer explained.

The Swiss recalled the exact moment when he knew there would be no return: a medical imaging study that was done on his knee and in which the results were not what he expected.

“I immediately realized that this would be everything for me“, he pointed.

“If I thought about retirement, it’s because I was already half retired”

Federer announced his retirement with an emotional letter that went around the world.

“It’s been a few weeks full of emotions, trying to find the right words to reflect how I felt and, above all, trying to thank the people who have helped me so much in my career,” Federer told BBC journalist Sally Nugent. .

“I had always rejected the idea of ​​retirement. I always said that if I was thinking about it, it was because I was already half-retired and that is not the way, in my opinion, to play professional tennis. So he was going to deal with it when he got there. And it happened. And I had to deal with that.”

He added: “For me writing those words was partly like a rehabilitation, as if I traveled through the words, I felt them.”

Considered by many as one of the most virtuous players in history, Federer confessed that he never thought he would have such success when he started in the world of competitive tennis.

Among its marks is that of staying 310 weeks as number 1 in the ATP ranking and win 103 tournaments within the circuit.

“I don’t think anyone thinks when they enter tennis that they are going to win all this. Let’s see, you’re happy just to win Wimbledon, which is already crazy, or to be number one. To be the best,” he explained.

According to Federer, tennis players don’t think so much about the weeks they spend as number one in the ranking: “Just the media and tennis fans talking about the records“.

“Seriously, when I was young I only thought about being on the circuit one day. Getting into the top 100 is already a significant achievement, especially when you come from a country like Switzerland where there is not a huge player base,” he said.

“I got over it all in my mind. It has been a total dream and it has lasted for a long time and that is the reason why I am totally happy to step aside.”

“It has been a delight for the fans”

Federer has played in an era where, along with Spaniard Rafael Nadal and Serbian Novak Djokovic, has dominated the tennis planet.

All three men will be on the same team at the Laver Cup, which runs from September 23-26, a tournament similar to golf’s Ryder Cup in which players from Europe take on players from the rest of the world.

Federer, Djokovic, Nadal and Murray will line up alongside Casper Ruud and Stefanos Tsitsipas as representatives of Europe, in what will be the last professional competition of the Swiss.

In the interviews he has given recently, Federer’s answers denote their satisfaction that their presence on the pitch has moved the fans of tennis, but he doesn’t think there is a need to worry about the future of the sport now that he is retiring.

“When I arrived we weren’t worried either. You know, we were kind of on the decline after Sampras retired. What will come next, right? Well, I arrived, and then Rafa came, and then there was Novak”, noted the Swiss.

“Suddenly there was this beautiful combination, we all won for more than 10 years, all the same tournaments, almost no one else could win anything,” he added.

And he concluded that for the fans it has been “a great pleasure” to be able to live that. “But I’m sure there will be wonderful new people“, he anticipated.

You can also read: The feat of Carlos Alcaraz at the US Open has not gone unnoticed by the kings of Spain