On AmericanPost.News, we are aware of what is happening with the Rivera case. An example of this was shown on Chisme No Like, where we can see Rosie Rivera’s husband fleeing, terrified when he sees the journalists’ cameras, who followed him to ask for a statement.

But why is the husband of Rosie Rivera, Jenni Rivera’s sister, running away?

We have already talked about the lawsuit between Rosie and Chiquis Rivera, where La Diva’s daughter had done a Live on her Instagram account and she revealed that her aunt Rosie was audited about the management of her mother’s inheritance and the companies in the name of Jenni Rivera.

In her live, Chiquis Rivera announced that an audit would be carried out by Rosie, his aunt. It is worth mentioning that the also singer, daughter of the ‘Diva de la Banda’, is out of Jenni Rivera‘s will.

While her aunt always mentioned that they could request money information at any time, it was Johnny, the youngest of children, who exercised his right to ask for reasons of how much his mother had left them.

But the Chiquis went further and said that her aunt’s husband, Abel Flores, had stolen $ 80,000 from the companies, but that Rosie Rivera never did anything.

“I just realized, a couple of years ago, someone was stealing from Jenni Rivera Fashions, someone very close to Rosie, and Rosie knew it, she told my sister Jacqie, at that time, as the money was paid, Rosie paid the money, I don’t know how much, we still have to go see, I think they were like 80 thousand dollars, which were stolen, because that’s what they were stolen”, declared Chiquis Rivera.

Rosie Rivera’s husband flees terrified when he sees the cameras

Given the aforementioned facts, it was that Rosie Rivera’s husband fled terrified when he saw Chisme No Like’s camera, who went to the residence of Rosie Rivera and Abel Flores to obtain a statement after the singer’s accusations.

It turns out that the accused man ran away in the presence of the press, an event that was recorded in the following video.

In this video, Abel Flores is seen standing next to a red car in which a woman was traveling, he is shown smiling and apparently he is signing some documents.

Minutes later, when the reporter wants to get a statement, Rosie Rivera’s husband flees terrified when he sees the cameras towards the house so as not to go out all day, which makes it clear that they do not want to talk about the controversy.

Abel Flores is the man who has been with Rosie Rivera for better and for worse. Since they fell in love and got married they had to face several obstacles. They were about to divorce but after their reconciliation, Rosie and Abel launched a “podcast” called “The Power of Us” (“El poder de nosotros”), in which they share their ups and downs in marriage.

Abel is 10 years younger than Rosie.

Abel Flores, a man ten years younger than her, but with great maturity and faith in God. The couple met, according to Rosie in her book “My Broken Pieces”, at the Christian church of which her brother Pedro Rivera is a pastor, located in Long Beach. By then, she wanted from the bottom of her heart to rebuild her life. Abel sang in the praise choir of the church and was 16 years old, while she was 26 and had a 5-year-old daughter.

Although the relationship was initially not well received by some members of the congregation or by the Rivera family, they waited for the boy to turn 18 and married in 2011.

He has two children with Rosie Rivera 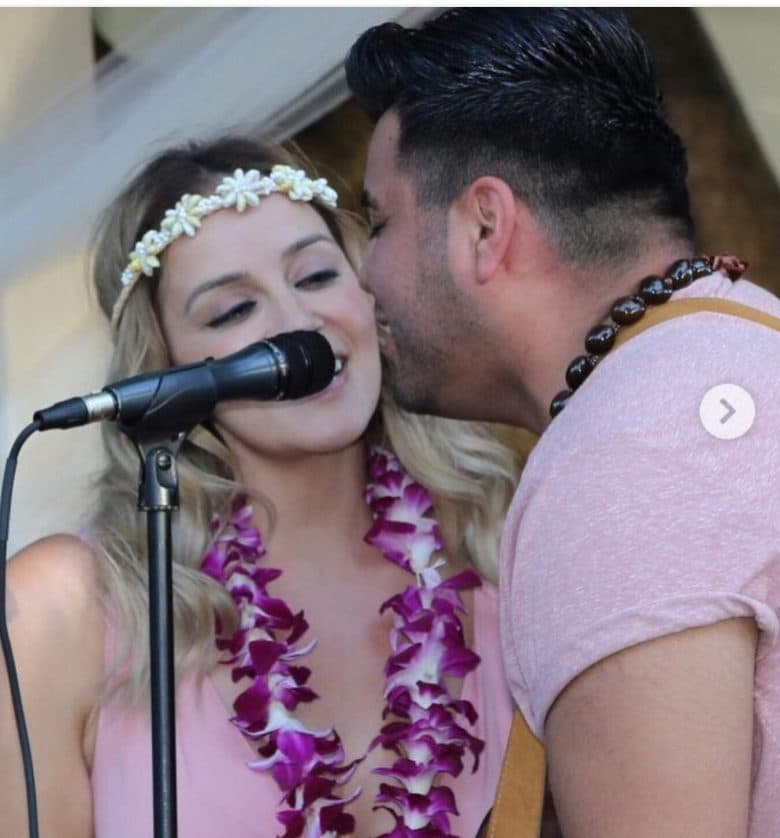 Currently, the couple make up their own family together with Kassey, Sammy and Elias. What do you think if we know more details in the following gallery? In the photo above we see Rosie Rivera and Abel Flores romantic in their renewal of marriage vows. Click on the arrow to learn more.

Flores, a Christian musician and worship leader, says he prefers to let his wife shine in whatever she does. But something they’re doing together on a radio show they launched this year called “The Power of Us . ” “Rosie and Abel have encountered many obstacles together and have come out stronger for it. It’s what makes them great relatable counselors for couples; it’s real-world advice,” Jack Hobbs, president of reVolver Podcasts, said in a statement . “I am pleased to welcome them back to reVolver and encourage their fans to tune in and see a different side of them.”

He almost lost his family due to gambling addiction, Rosie asked him for a divorce

Rosie Rivera revealed that she was about to divorce Abel Flores, due to her husband’s gambling addiction, Telemundo reported . “When I opened his computer, I saw a bank account that obviously wasn’t mine, it was only his, with a bank that we didn’t even associate, and I was extremely confused, because there was a lot of money exchanged, going in, going out, daily, and I did not know where that money had come from,” she said in an interview with Suelta la Sopa. “It was six months of lies, and the real problem was that he had an addiction to the deck,” she added. “I felt extremely betrayed by the lie, and it was not with another woman, but I felt that there was no longer any hope for us after so many lies. And it was like in 2015 that I said it out of courage, but I said it with desire, and I kicked him out of the house for three months.

Rosie said her husband “didn’t see he had an addiction until he lost everything, his family, his kids, his house.” However, he decided to give it a second chance when Abel recognized his problem. “He was living in a hotel, or in his car, literally, and I was ready to sign the (divorce) papers and that’s when he was able to react and say: ‘I have a problem and I need help.’ And that’s when I decided that I still loved him and that I was willing to help him,” Rosie explained.

Flores is a Christian singer and worshiper who has a company that sells clothing and accessories called Abels Worship, according to his Twitter account.