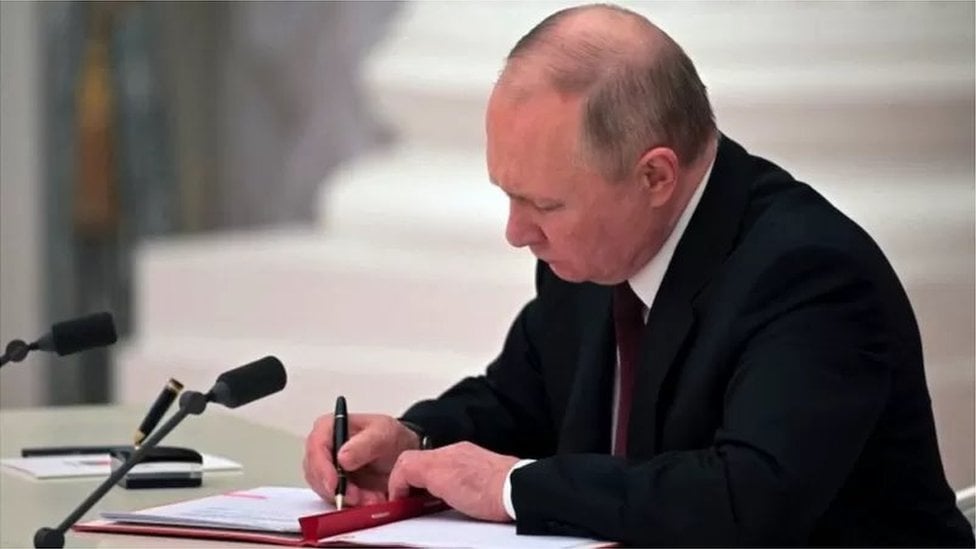 Already on Monday, Putin had announced the dispatch of Russian troops to the rebel regions of donateyousk and Luhanskafter acknowledging the independence of both.

Putin assures that he does not want to invade the neighboring country, but Europe fears a war involving more countries. US President Joe Biden said on Wednesday that “the world will hold Russia accountable.”

This is the latest chapter in a conflict that dates back to at least 2014, when Russia took control of the Ukrainian territory of Crimea and supported pro-Russian separatist forces in the Donetsk and Luhansk regions.

But what happened in the last few hours and how did we come to this conflict?

1. What did Putin say when announcing the “special military operation”?

This was communicated in a televised speech that occurred at the same time that the United Nations Security Council implored him to stop any military action.

Putin said the operation seeks the “demilitarization and denazification of Ukraine.”

As he explained, the decision was made after receiving a request for help from the leaders of the Russian-backed separatist territories formed in eastern Ukraine in 2014, although Western intelligence had warned of a potential invasion for weeks.

“I made the decision to carry out a special military operation. His goal will be to defend people who have suffered persecution and genocide for eight years by the Kiev regime, ”said the Russian president, in a statement for which he has not presented evidence.

Putin called on the Ukrainian soldiers to lay down their weapons immediately.

“All service members of the Ukrainian army who follow these demands will be allowed to leave the battle zone,” he said.

He also did what seemed to be a warning to other countrieslike the United States, which has supported Ukraine.

“Anyone who tries to interfere with us, or even more so, create threats to our country and our people, should know that Russia’s response will be immediate and will lead to consequences the likes of which it has never experienced before in its history. We are ready for any turn of events.”

2. What was Ukraine’s reaction?

“Putin has just launched a full invasion of Ukraine. It is a war of aggression. Ukraine will defend itself and win,” he noted. “The world must stop Putin,” he claimed.

Putin has just launched a full-scale invasion of Ukraine. Peaceful Ukrainian cities are under strikes. This is a war of aggression. Ukraine will defend itself and will win. The world can and must stop Putin. The time to act is now.

This Thursday morning it was announced that Ukraine broke diplomatic relations with Russia.

Shortly before Putin’s announcement and the start of the military operation, the Ukrainian president, Volodymyr Zelenskymade an emotional speech on television.

Zelensky first spoke in Ukrainian and warned that a Russian invasion would be “the start of a great war on the European continent.”

Then he changed to Russian and in that language he asked the population of the neighboring country to reject an attack and pointed out that they are being lied to about Ukraine.

They say that the flame [de la guerra] it will free the people of Ukraine, but the Ukrainians are free,” he said, according to the BBC’s Eastern Europe correspondent Sarah Rainsford.

The Ukrainian leader stressed that his country is ready for a Russian attack and warned: “We do not need any war, not cold, not hot, not hybrid. But if the troops attack us, if they try to take our country – our freedom, our lives, the lives of our children – we will defend ourselves.”

“If they attack us, they will see our faces, not our backs,” the Ukrainian president said.

3. How does Putin justify the “military operation”?

On Monday, Putin had already delivered a televised speech in which he announced that he recognized the independence of two separatist-controlled areas of Ukraine backed by Russia.

That was seen by analysts as the previous step to the military operation. In fact, this very Wednesday the pro-Russian rebel regions in Ukraine asked Putin to send troops.

Among Putin’s arguments against Ukraine there are those of a historical and security nature.

On Monday he claimed that Ukraine had no criminal record. to be a real nation and accused the Ukrainian authorities of corruption.

Shortly after the announcement, Putin signed an order for troops to perform “peacekeeping functions” in both rebel regions.

“Let me once again emphasize that Ukraine for us is not just a neighboring country. It is an integral part of our own history, culture, spiritual space,” she said.

He also accused the Ukrainian government of being a “puppet” of the US and alleged, without foundation, that the Ukrainians are being “brutalized” by their leaders and that the country could obtain nuclear weapons and represent a greater threat to Ukraine. Russia.

During the speech, Putin once again repeated the dangers of Ukraine being admitted to the NATO (the organization does not even have its acceptance on the agenda and it is only an aspiration of Kiev) and assured that if the country joins the alliance, Russia would be at risk of an “attack”.

Putin also claims, without evidence, that there is a “genocide” by Ukraine against Russian-speakers in the east of the country.

4. How did this situation come about?

The background must be found in 2014, when Russia took control of Crimea and supported separatist forces in eastern Ukraine.

The conflict has so far claimed some 14,000 lives.

On February 18, the BBC’s Ukrainian service reported that the heavy artillery and mortar fired in the region were the heaviest in years.

In their latest report, international monitors from the Organization for Security and Cooperation in Europe reported hundreds of ceasefire violations between February 17 and 18.

Leaders of the two Russian-backed breakaway areas announced the evacuation of residents, saying that Ukraine hasbia intensified the bombing and planning an attack.

Denis Pushilin, head of the Donetsk People’s Republic (DNR), announced an evacuation in a video allegedly filmed on Friday. However, a BBC analysis of the video’s metadata showed that it had been recorded before hostilities broke out.

In November last year Russia starteddeployed large numbers of troops in areas close to the border with Ukraine.

But on February 15, Putin suggested that there would be a partial withdrawal of Russian forces.

However, Ukraine and its allies said there was no reduction in the number of Russian troops in the border areas.

“They have always deployed forces from one side to the other,” NATO Secretary General Jens Stoltenberg said a day after Russia’s announcement.

“It’s been a big (move) up and down, back and forth, all this time; but the trend in recent weeks and months has been a steady increase of Russian capabilities near the borders with Ukraine.

You can now receive notifications from BBC News World. Download the new version of our app and activate it so you don’t miss out on our best content.