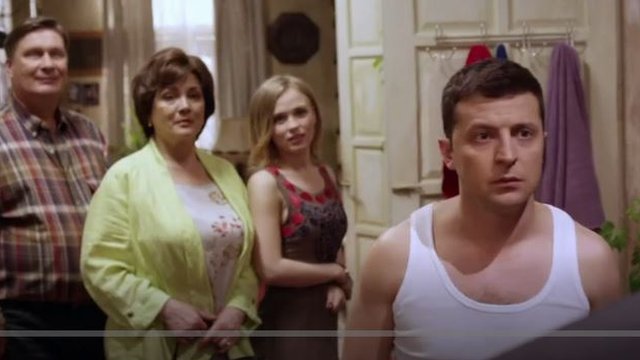 When Volodymyr Zelensky first appeared on television screens as “President of Ukraine”, he did so as an actor in a popular comedy series.

But then life imitated fiction and in April 2019 he became the real president of the country.

Now he leads a nation of 44 million people that is in a highly delicate situation due to the military threat from its neighboring country, Russia.

In his television role in the series “Servant of the People”, Zelensky played a humble history teacher who became president by chance after a video of him rudely railing against corruption went viral.

It was a fairy tale story that captured the imagination of Ukrainians disillusioned with politics.

The series became his party’s flagship, as Volodymyr Zelensky campaigned on the message of cleaning up politics and bringing peace to the east of the country.

Now, the decision of Russian President Vladimir Putin to recognize two Ukrainian territories as “independent republics” and the movements of the Russian army in the area have placed the 44-year-old leader at the center of a worrying international conflict.

His path to the presidency was unconventional.

Born in the central city of Kryvyi Rih to Jewish parents, Volodymyr Zelensky graduated from the Kiev National Economic University with a law degree.

However, comedy turned out to be his calling.

When I was young, I regularly participated in a competition comedy on Russian television. In 2003, she co-founded a successful television production company named after his comedy team, Kvartal 95.

However, until a few years ago, his television and film career in films such as Love in the Big City (2009) and Rzhevsky Versus Napoleon (2012) were his main focus of attention.

“Servant of the People”

The stage for Zelensky’s unlikely political rise was set by the turbulent events of 2014, when Ukraine’s pro-Russian president, Viktor Yanukovych, was ousted after months of protests.

Then, Russia seized Crimea and backed separatists in the east of the country in a war with Ukraine that continues to this day and has intensified in recent days following the Russian recognition of Donetsk and Luhansk as independent republics.

A year later, in October 2015, “People’s Servant” premiered on the 1+1 network where the current president played a character named Vasiliy Goloborodko, whose meteoric rise to the highest position was reflected by the actor himself.

Zelensky defeated incumbent President Petro Poroshenko, who tried to portray his rival as a political novice even though voters saw that trait as an advantage.

He was elected with an overwhelming majority, obtaining 73.2% of the votes, and was sworn in as the sixth president of Ukraine on May 20, 2019.

The president tried to fulfill his promise to end the conflict in eastern Ukraine that has left more than 14,000 dead.

At first he got some close-ups.

There were talks with Russia, prisoner swaps, and measures were passed to implement parts of a peace process known as the Minsk accords. But these were never fulfilled.

The atmosphere of conciliation turned sour over Russian President Vladimir Putin’s decision to give Russian passports to those living in the occupied areas.

A ceasefire went into effect in July 2020, but sporadic fighting continued.

Zelensky took a more assertive tone in Ukraine’s campaign to join the European Union and the NATO military alliance, and those proposals infuriated Russia’s president.

Tension between the two countries has escalated in recent weeks. Putin announced on February 21 the dispatch of troops to Donetsk and Luhansk shortly after recognizing the independence of these two regions that since 2014 have been controlled by pro-Russian groups.

Before the announcement, the Ukrainian president rejected what he considers a “violation of sovereignty” of his country by Moscow.

Ukraine “is not afraid of anything or anyone,” Zelensky said in a televised message on Monday, demanding “clear support” from its Western allies.

On Tuesday he announced that he is mobilizing the reservists so that his country can face a possible Russian invasion.

Another of his campaign promises has proven just as difficult to keep: his promise to curb the widespread political and economic influence of Ukraine’s super-rich oligarchs.

Critics were skeptical because of his links to Ihor Kolomoisky, a tycoon whose media empire backed Zelenksy’s election campaign.

However, the president intensified his commitment to “de-oligarchy”.

His government targeted some of Ukraine’s most prominent oligarchs, including pro-Russian opposition leader Viktor Medvedchuk, who was placed under house arrest on charges of crimes including treason, which Medvedchuk condemned as “political repression.”

A regulation was then passed that established a legal definition of oligarchs and subjected them to restrictions, including a ban on financing political parties.

And yet, some critics saw his anti-corruption measures as cosmetic and designed primarily to curry favor with the administration of US President Joe Biden, a crucial bulwark against Russia.

Zelensky has also faced complex moments in his relationship with the United States.

In July 2019, then-US President Donald Trump asked Zelensky for “a favor” during a phone call.

Trump wanted Zelensky to investigate corruption allegations against Biden, then the Democratic favorite to win the 2020 election.

In return, Zelensky would get a trip to Washington and military aid.

When details of the call became widely known, thanks to a whistleblower leak, Trump was accused of illegally pressuring Ukraine’s leader to seek damaging information about a political rival.

Trump insisted that he had done nothing wrong, while Zelensky denied any quid pro quo.

Democrats subsequently impeached Trump in an impeachment trial in which he was acquitted.

Zelensky has not been exempt from scandals either.

In October 2021 he was mentioned in the Pandora Papersa massive leak of documents that exposed the hidden wealth of the world’s rich and powerful.

The documents revealed that Zelensky and his inner circle benefited from a business network abroad.

But Zelensky said he found no new details in the documents and denied that he or anyone at his company, Kvartal 95, was involved in money laundering.