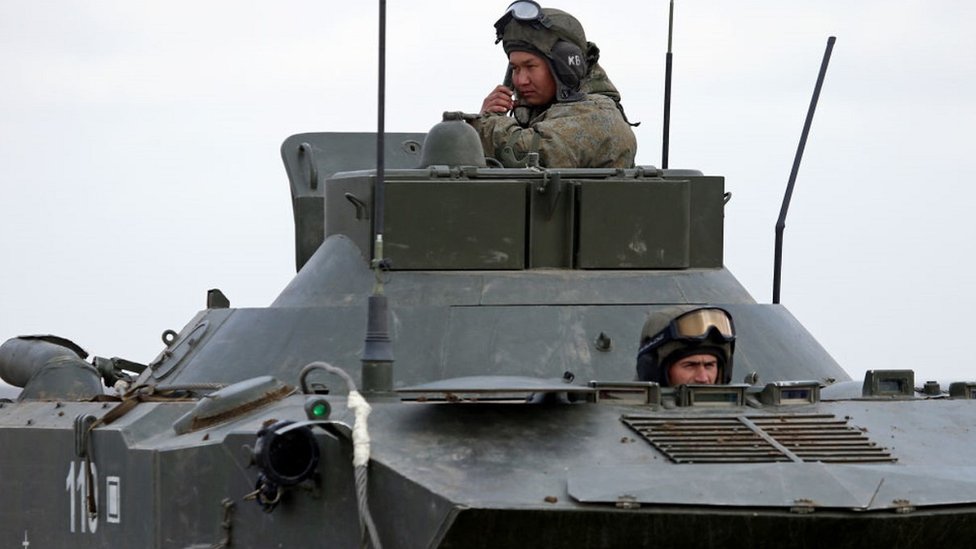 After denying for months that he was planning an attack on Ukraine, Russian President Vladimir Putin launched a military operation in the neighboring country on Thursday and warned that Moscow’s response would be “immediate” if anyone tried to confront Russia.

Several cities and facilities in Ukraine were attacked and the president andPresident Volodymyr Zelenskybroke off diplomatic relations with Moscow.

Putin’s latest actions take place days after he terminated the Minsk peace agreement in eastern Ukraine, recognized the independence of Donetsk and Luhanks, two eastern regions controlled by pro-Russian rebels since 2014, and ordered the sending of troops.

What happens after the start of the great Russian military operation on Ukrainian territory could endanger the entire security structure of Europe.

In these keys we explain what is behind it and what can happen now.

1. What is Putin looking for in Ukraine?

Russia has said it is the “moment of truth” to reformulate its relationship with NATO (the Western defensive alliance that has increasingly gained ground in Eastern Europe) and has highlighted several demands.

First, you want a legally binding promise that the NATO does not expand plus.

“It is absolutely mandatory for us to ensure that Ukraine never ever becomes a member of NATO,” Deputy Foreign Minister Sergei Ryabkov said.

Putin has complained that Russia “has nowhere else to retreat.” “Do you think we’ll sit idly by?” he launched.

In 1994, Russia signed an agreement in which it promised to respect Ukraine’s independence and sovereignty.

But last year, Putin wrote a lengthy article in which he described the Russians and Ukrainians as “one nation”and now he has said that modern Ukraine was created entirely by communist Russia.

He regards the collapse of the Soviet Union in December 1991 as the “disintegration of historical Russia.”

Putin has also argued that if Ukraine joins NATO, the alliance could try to recapture Crimea, the strategic peninsula that Russia annexed in 2014.

Their other main demands are that the NATO does not deploy “attack weapons” near the borders of Russia” and to eliminate the forces and military infrastructure of the member states that joined the alliance since 1997.

That means Central Europe, Eastern Europe and the Baltic countries.

Actually Russia wants NATO to return to its pre-1997 borders.

In addition to alleged threats to his security and questioning Ukraine’s recognition as a sovereign nation, Putin accuses the Kiev government of being a US puppet.

Although saying rule out the occupation, it remains to be seen whether Putin’s goal is to change the democratically elected government that runs the country.

Putin spoke on Thursday of bringing to justice “those who committed numerous bloody crimes against civilians.” Invading from Belarus and taking Antonov airport outside Kiev in the first hours of the raid, there is little doubt that the capital is in their crosshairs.

In his speech on Thursday he also spoke of “demilitarizing” the neighboring country.

He also denounced an alleged “nazification” in the east against Russian-speakers, whom he wants to protect, he says. The rebel leaders asked Moscow to send troops, a step prior to the military offensive that took place hours later.

Putin even mentions the word “genocide”, but there is no evidence to support that.

The German chancellor, Olaf Scholz, defines such an accusation as “ridiculous”.

There is, however, a conflict in eastern Ukraine. The United Nations estimates that more than 14,000 people have been killed since April 2014, when the conflict began, including more than 3,400 civilians. It is estimated that there have been up to 39,000 injuries.

2. What are the pro-Russian rebel areas and why are they key to the conflict?

Until now, the so-called people’s republics of Donetsk and Luhansk have been led by Russian representatives.

According to the decree approved by Putin on Monday, in which these two regions were recognized as independent, the presence of Russian troops stationed there and the possibility of building military bases are also recognized for the first time.

The two rebel areas had a special status within Ukraine under the Minsk peace accords, but measures taken by Putin prevent that from happening.

What makes the situation more alarming is that the two small rogue states not only claim the limited territory they control, but also covet all the regiDonbas, where they are located Donetsk and Luhansk.

“We recognized them, didn’t we? And this means that we recognized all its founding documents,” the Russian president said.

Russia had already prepared the ground for war, with baseless accusations that Ukraine had committed “genocide” in the east and handed over 700,000 passports in rebel-controlled areas, so he argues that any action is aimed at protecting his own citizens.

Along these lines, this Thursday he justified the start of the military operation by saying that on Wednesday the separatist leaders of the rebel regions of Donetsk and Luhansk asked the Kremlin to send Russian troops to their territories.

3. Is there still room for a diplomatic solution to the crisis?

After the Russian president’s announcement, his American counterpart, Joe Biden, accused him of choosing to carry out “a premeditated war that will lead to a catastrophic loss of life and human suffering.”

“Russia alone is responsible for the death and destruction this attack will bring, and the United States and its allies and partners will respond in a united and decisive manner. The world will hold Russia to account,” she stated.

Ukraine has developed its armed forces in recent years and Russia will face a hostile population. The army has recalled all of its reservists between the ages of 18 and 60.

The chairman of the US Joint Chiefs of Staff, Mark Milley, said Tuesday that the invasion opens a “awful” scenariosince the conflict could spread to densely populated urban areas.

The Russian president has other options: perhaps a no-fly zone or blockade of Ukrainian ports, or moving nuclear weapons to neighboring Belarus.

A de-escalation of the conflict seems remote.

Before the condemnation of the announcement of the “special military operation”, the West already said that the recognition of the independence of the separatist regions was illegal.

The UN Secretary General, António Guterres, called it violation of the territorial integrity and sovereignty of Ukraine.

But NATO allies have made it clear that there are no plans to send combat troops to Ukraine itself. Instead, they have offered Ukraine advisers, weapons and field hospitals.

So the main response will be to penalize Russia with sanctions:

There are even greater penalties provided if necessary.

The United States is targeting Russia’s financial institutions and key industries; the EU is focusing on Russia’s access to financial markets and the UK has warned that “those in and around the Kremlin will have nowhere to hide”, with restrictions being placed on Russian companies to access the dollar and pound.

The ultimate economic blow would be to disconnect Russia’s banking system from the international Swift payment system. But that could have a negative impact on the US and European economies.

Meanwhile, NATO has deployed 5,000 soldiers in the Baltic states and Poland. Another 4,000 could be sent to Romania, Bulgaria, Hungary and Slovakia.

The US will send more troops to Germany.

5. What role does NATO have?

NATO is a Western defensive alliance born to counter the Soviet Union during the Cold War.

It has an open door policy for new members and its 30 member states are convinced that it will not change.

Ukraine’s president called for a “feasible and clear time frame” to join NATO. But, as the German chancellor has made clear, there is no prospect of that happening in the long term.

In the eyes of President Putin, the West promised in 1990 that NATO would not expand “one inch east,” but did so anyway.

However, that was before the collapse of the Soviet Union, so the promise made to then-Soviet President Mikhail Gorbachev only referred to East Germany in the context of a reunified Germany.

Gorbachev later said that “the issue of NATO expansion was never discussed” at the time.

6. How dangerous is this invasion for Europe

It is a terrifying moment for the people of Ukraine and the rest of the continent as they witness a major power invade a European neighbor for the first time since World War II.

Dozens of people have already died in what Germany calls “Putin’s war.” For European leaders, this invasion recalls some of the worst moments since the 1940s.

According to the President of France, Emmanuel Macronis a turning point in the history of Europe.

In a clear allusion to the Cold War, the Ukrainian president, Volodymyr Zelensky, spoke of the creation of a new iron curtain between Russia and the West.

The invasion is already being felt in many countries that share a border with Russia and Ukraine.

Latvia, Poland and Moldova are already expecting a large influx of refugees. Lithuania and Moldova have declared a state of emergency after the arrival of thousands of women and children.

Nor is this a war for which the Russian population was prepared, which will also be affected by Western sanctions.

*This article was originally published on February 20, 2022 and updated after Putin’s decision to recognize the Ukrainian regions of Donetsk and Luganks as independent statesientities.