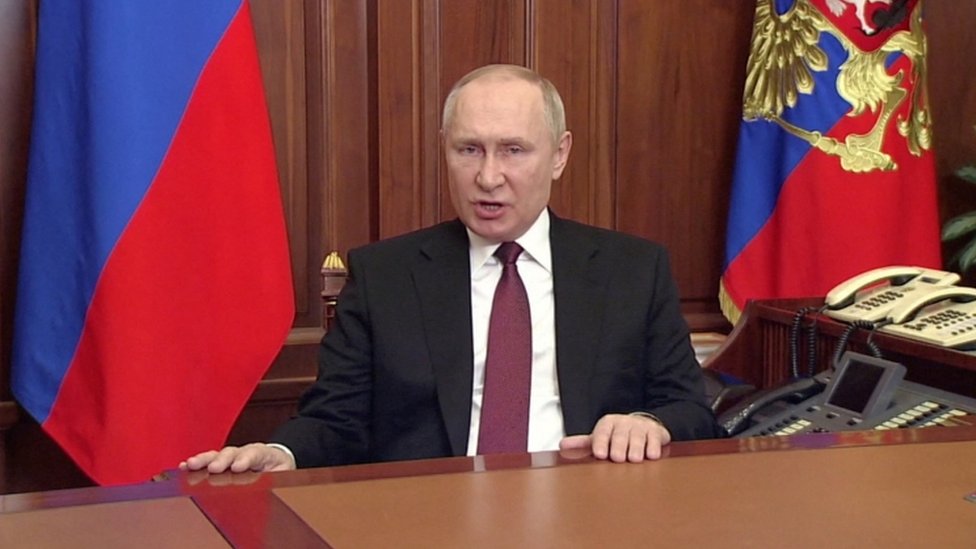 The president of the United States, Joe Biden, assured on Wednesday night that Ukraine is suffering “an unprovoked and unjustified attack by Russian military forces”, after Vladimir Putin announced a “special military operation” against the country neighbor.

Putin appeared before local television cameras to report that he had decided to carry out a military operation that sought the “demilitarization and denazification of Ukraine” (a country whose president is Jewish and several of his relatives died in the Holocaust).

Although he announced that the operation would be limited to the east of the country, as the hours passed it became clear that Russian troops were attacking the entire country.

The Russian action provoked a quick rejection from the international community, beginning with the United States.

According to Biden, Putin chose to wage “a premeditated war that will bring catastrophic loss of life and human suffering.”

“Russia alone is responsible for the death and destruction this attack will bring, and the United States and its allies and partners will respond in a united and decisive manner. The world will hold Russia to account,” she stated.

This Thursday Biden announced a new round of economic sanctions that will include the freezing of bank assets and investor capital: “Putin’s aggression against Ukraine will end up costing Russia dearly, economically and strategically. We will make sure of that,” he noted.

“This is a serious violation of international law and a serious threat to Euro-Atlantic security,” he said.

UK Prime Minister Boris Johnson said he was “horrified” by the “terrible events in Ukraine.”

For her part, the president of the European Commission, Ursula von der Leyen, accused Putin of being “responsible for bringing the war back to Europe” and assured that the sanctions will weaken “Russia’s economic base and its ability to modernize ”.

German Chancellor Olaf Scholz reaffirmed his support for his allies in Eastern Europe and asserted that the Russian president will pay a “bitter price” for his “serious mistake.”

Neighbors prepare for the worst

Countries bordering Ukraine and Eastern Europe not only share concerns about the situation, but are also seeking measures to bolster their own security, with some bracing for a possible refugee exodus.

The president of Lithuania -member of NATO-, Gitanas Nausėda, signed a decree to declare a state of emergency in the country.

The Moldovan government said that more than 4,000 Ukrainians came to its border from Ukraine and promised to take in tens of thousands of refugees.

Romania, for its part, announced that it could give asylum to half a million people.

Poland, which is also setting up reception points for refugees, urged Russia to end its attacks and leave Ukraine alone.

Georgia, which fought Russia in the 2008 South Ossetia War, backed Ukraine and said the Russian attack would have “dire consequences” for the international community.

Ukraine has asked NATO member Turkey to close the Bosphorus and Dardanelles straits to Russian ships.

Belarus, Russia’s ally in the region, said it was not taking part in the military action but would consider it if Moscow asked it to. This country has received Russian troops during the crisis, who crossed into Ukraine in the attack.

China: “USA. has fueled the flame

China’s position in this conflict has aroused strong interest.

Beijing’s initial response was to view the word invasion as part of the “typical Western media” narrative.

Vice Foreign Minister Hua Chunying avoided answering yes or no to the question of whether she would call Russia’s attack on Ukraine an “invasion.”

Beijing also recommended its citizens in Ukraine to fly a Chinese flag to try to protect themselves.

China and Russia maintain a strategic partnership to counter US influence.

This link was sealed in a meeting between Putin and Chinese President Xi Jinping just before the Beijing Winter Olympics.

Latin American countries have expressed, in general, their rejection of the Russian attacks on Ukraine and only three support Putin: Venezuela, Cuba and Nicaragua.

President-elect Gabriel Boric, who will take office on March 11, also condemned “the invasion of Ukraine, the violation of its sovereignty and the illegitimate use of force.”

Argentina expressed its “firm rejection of the use of armed force” and called on Russia to “cease military actions in Ukraine”, according to a government statement on Thursday.

“Colombia categorically rejects the attacks against Ukraine by Russia. These events threaten Ukraine’s sovereignty and put the lives of thousands of people at risk,” tweeted Colombian President Iván Duque.

Ecuador also condemned the “violation of Ukraine’s sovereignty and territorial integrity” that “violates the principles of the United Nations Charter,” according to a tweet by President Guillermo Lasso.

“We reject actions contrary to international law and UN principles,” published the Uruguayan president, Luis Lacalle Pou, who urged the return of “negotiations to resolve the conflict in a civilized way.”

The president of Mexico, Andrés Manuel López Obrador, did not directly condemn Russia’s actions and limited himself to supporting peace and dialogue.

“We are going to continue promoting that there is dialogue, that force is not used, that there is no invasion. We are not in favor of any war, Mexico is a country that has always stood for peace and for the peaceful solution of disputes, it is even in the Constitution”, he declared.

Venezuela, Cuba and Nicaragua, political and economic allies of Russia in the region, expressed their support for Putin.

Cuba, for its part, affirmed that Russia has “the right to defend itself” and urged NATO to meet its demand for “security guarantees,” according to Foreign Minister Bruno Rodríguez.

The foreign minister spoke during a visit to Havana by Duma President Vyacheslav Volodin on Wednesday, a day after Moscow agreed to restructure Cuba’s $2.3 billion debt with Russia.

Finally, the president of Nicaragua, Daniel Ortega, expressed his support for Putin and accused the United States and NATO of threatening the security of the Slavic country.