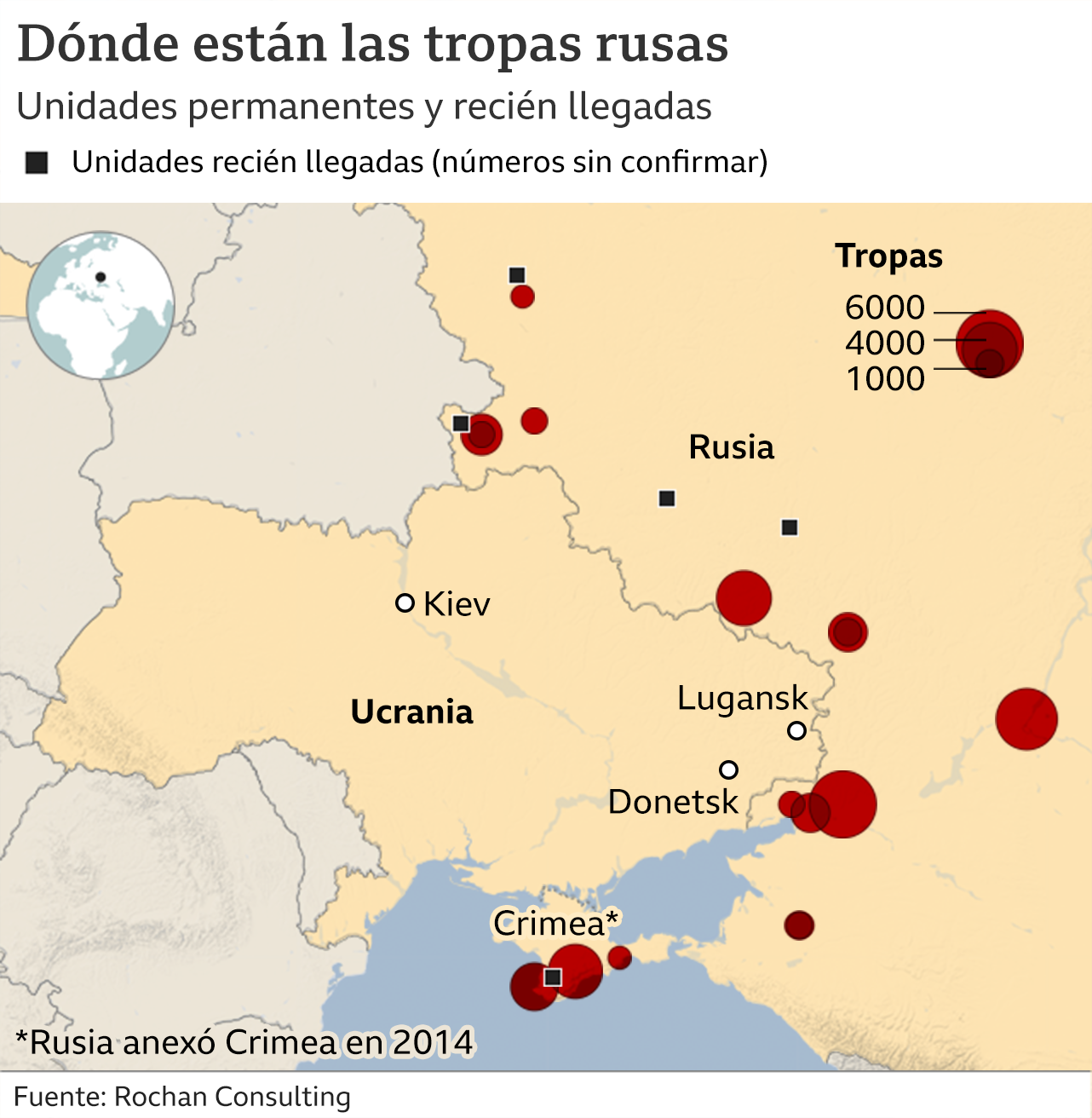 Faced with the threat that the accumulation of Russian troops on Ukraine’s borders represents for them, several countries have shown the will to mobilize artillery.

While the UK opted to hand over arms to Kiev, Washington, which has long done so, gave Estonia, Latvia and Lithuania the green light to do the same with their US weapons.

The decision was criticized by Ukrainian Foreign Minister Dmytro Kuleba, who called the stance “disappointing” on Twitter and accused Berlin of “encouraging” Russian aggression.

Berlin’s refusal highlights a key divergence within Europe and shows that the continent does not have a clear vision on what is the best method for deter Russia from re-invading the second most populous country in Eastern Europe.

This division is seen by the Kremlin as an advantage.

“It is always an advantage if your adversaries are not completely united,” Jeremy Shapiro, research director of the Berlin-based European Council on Foreign Relations, tells BBC Mundo.

“The United States and Europe do not have a common response, and the case of Germany is a good example,” he adds.

Last week, the United Kingdom preferred that the planes of its armed forces avoid German airspace and take a longer route, via Denmark, transporting anti-tank weapons destined for Ukraine.

Although the journey took a couple of hours longer, it saved London the time it would take to seek permission from Germany, a procedure that would probably would have delayed the mission much more.

Jeremy Shapiro highlights that Europe is not completely disunited with Russia either and that the differences are slight, but “the amount of disunity” that they have shown is undoubtedly “celebrated” from Moscow.

German officials have justified their refusal to allow arms shipments to Ukraine by citing a decades-old policy of not supplying arms to any side in a conflict.

The posture derives from his past as aggressor power during World War II.

But Shapiro recalls that there have been exceptions to that policy and that Berlin has not always adhered to it with “complete meticulousness.”

A 2020 Frankfurt Peace Research Institute study examined the consistency of this export policy since 1990, finding that Germany has “repeatedly violated” it and that wars like the one in Yemen have been “fought with German weapons.”

“Berlin is making a big mistake”

From the German point of view, the refusal to send weapons to Ukraine is also seen as a way of contribute to the de-escalation of tensionsGerman historian and political scientist Liana Fix, from the German Marshall Fund in Washington, tells BBC Mundo.

Last Saturday, the German Defense Minister, Christine Lambrecht, assured that Berlin is effectively seeking to “decrease” tensions and pointed out that the supply of weapons “would not be useful” to calm the current situation.

Instead, Germany plans to send a field medical facility to Ukraine in February, Lambrecht said in an interview published by the newspaper. Welt am Sonntag.

Shortly before, Foreign Minister Annalena Baerbock assured that the German government was prepared to have a serious dialogue with Russia to ease tensions.

“Berlin is making a big strategic mistake and you are putting your reputation at risk“, estimated the chairman of the national security committee of the Lithuanian Parliament, Laurynas Kasčiūnas, during an intervention on the public broadcaster LRT .

For Liana Fix, the gas that Russia sells to Germany undoubtedly plays an important role in how Berlin is handling the escalation.

Recently, Germany asked him to “prudence” to Europe and the United States when considering possible sanctions against Russia for any aggression against Kiev.

“Germany has said that all options are on the table, but it is more dependent on Russian gas than other countries,” he tells BBC Mundo.

Gas accounts for about a quarter of the total energy consumption in Germany and Russia contributes more than half of its imports.

This makes it the most vulnerable country, within the large economies of the region, to a possible Russian retaliation.

“Germany is getting used to Russia using gas as a political weapon and clearly this plays a role in Germany’s handling of the crisis”, reiterates Fix.

Berlin has resisted US calls for the Nord Stream 2 pipeline to be included in any future sanctions package imposed on Russia.

The Nord Stream 2, which runs from Russia to Germany, is a colossal project which crosses the Baltic Sea, measures about 1,225 km and whose construction lasted five years.

The pipeline is intended to double Moscow’s gas exports to Germany, without having to go through Ukraine, which derives income from other gas pipelines that are already in operation and pass through its territory.

It is clear to Lix that Germany will not be able to give the Nord Stream 2 project the green light if Russia executes a major incursion into Ukraine.

“The interesting thing will be to see if, if there is a minor incursion, Germany will try to show that action does not justify abandoning plans to launch the gas pipeline.

Shapiro of the European Council on Foreign Relations agrees that Germany may not want to inflame the situation by allowing arms to be sent to Ukraine, but thinks Berlin is likely to change its position. if the invasion of Ukraine becomes inevitable.

The expert describes Germany’s relationship with Russia as “complicated” and “multispectral”.

“There are many things that are important to the Germans, such as economic exchange, but it also has many problems“, highlights.

One of the most recent disagreements between Germany and Russia took place in August 2020 following the poisoning of Putin critic Alexei Navalny, who was hospitalized in Berlin after an attack with a nerve agent that he attributed to the Russian government.

The truth is that since German reunification, Berlin and Moscow had had a very close historical relationship.

But according to Liana Fix, Germany has been in a process of disillusionment with Russia since 2014, the year in which it invaded and annexed the province of Crimea.

“That special relationship has turned into a more pragmatic one,” he says.

The perception of Russia in Germany has been changing, although more slowly than in other neighboring countries such as the United Kingdom or the Baltic nations, which they tend to have a tougher stance against Russia.

The now former chief of the German army Kay-Achim Schönbach had to resign last Saturday after saying the day before that the idea that Russia wanted to invade Ukraine was nonsense and that all President Vladimir Putin wanted was respect.

Schönbach added that the Crimean peninsula, which Russia annexed in 2014, “is gone and will never return.”

Although the German chancellery was quick to describe the comments as “unacceptable” and the official left office, many consider that the event once again highlighted the doubts in Germany in the face of the Russian threat.

Fix says that German foreign policy has always sought to have good relations with Moscow, but “the problem is that Russia makes it difficult with its actions in Ukraine.”

“There are also a lot of expectations about Germany’s role in the transatlantic allianceand these expectations are somewhat incompatible with the relations that Berlin wants to have with Moscow”, he adds.

However, if there is a Russian invasion of Ukraine, Berlin is expected to approve, along with its Western allies, a series of “severe” sanctions against Moscow.

While Germany has blocked German arms shipments to Ukraine, it has not refused to join other Western countries in warning that if Russia launches a war in the heart of Europe, there will be serious consequences“.