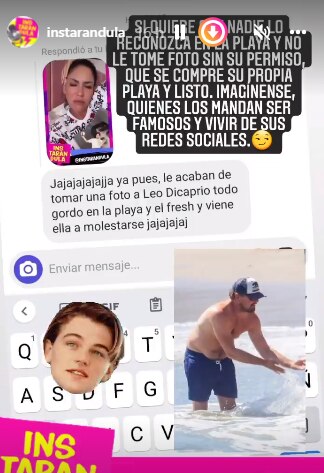 DOESN’T HOLD ANYTHING. Tilsa Lozano revealed on her Instagram account that she rebuked a young woman for taking pictures of her while she was spending a day at the beach. According to the model, they made her feel uncomfortable by invading her privacy and Samuel Suárez did not hesitate to lash out at her.

ALSO READ: Melissa Paredes compares Rodrigo Cuba and Anthony Aranda: “Before I was not jealous, now I am”

Through his Instarándula portal, journalist Samu defended his followers who managed to get photos of Tilsa and criticized the former avenger for her attitude.

“Tilsa has been in the show for years, she is very popular and she will not square every person who recognizes her on the street and wants to capture an image of her”, he pointed.

In that line, ironically, he exhorted Tilsa to have her private beach so that no followers would disturb her.

“If you want no one to recognize you on the beach and not take a picture of you without your permission, buy your own beach and that’s it. Imagine, those who send you to be famous and make a living from their social networks ”, revealed.

ALSO READ: Dalia Durán talks about Andrés Hurtado’s donation: “I didn’t see a dollar, I’m not going to shut up when they lie”

WHAT DID TILSA LOZANO SAY?

On her Instagram account, Tilsa Lozano asked to respect her space and to stop taking photos of them, especially when she is not at her best.

“When you bend over on the beach, you get your belly, the roll, the cellulite, everything. So, I turned around and said: Are you taking a picture of me? “, he stated in his Instagram stories.

He revealed that at one point he bent down to remove some things from his ATV, when he realized that a girl was taking pictures of him from behind and from the side. He immediately went to talk to her and complained about what happened.

“I told him ‘if you want to take a picture with me, obviously I’m going to be delighted to take it’; but that you are taking pictures of me hiding, invading my space and my privacy, in a super uncomfortable way, it was quite annoying “, stated ‘Tili’.