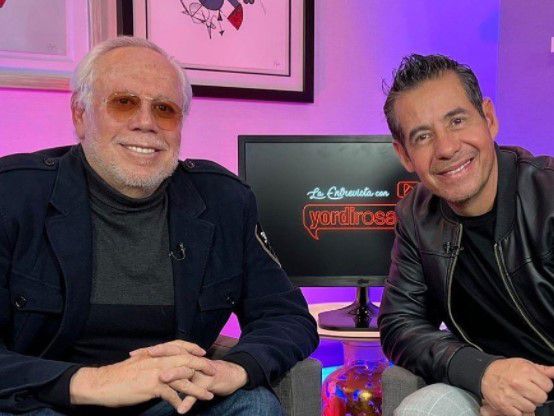 Users questioned the fact that Yordi and Luis de Llano talked about the subject of Sasha Sokol with total naturalness (Photo: Instagram)

In the midst of the commotion caused by the communication of sasha sokol in which he clarified after three decades what had been rumoured, her romantic relationship with Luis de Llano when she was a teenager and he was a man of almost 40 yearsdifferent opinions have emerged in this regard.

What was described by the singer as abuse and manipulation by the creative producer of television, a fact that to this day continues to cause bitter memories, has also become a reason for recrimination against Yordi Rosado.

And it is that Sasha’s heartbreaking statements derived after March 6 Yordi presented an interview with De Llano on his YouTube channelwhere they touched on various points such as his career, his family’s legacy, and the creation of the successful band Timbiriche.

On the show, the creative producer talked about the relationship he had with Sasha and he admitted to having fallen deeply in love with herin addition to pointing out that it was she who terminated the relationship, which, according to what she said, lasted six months.

“Yes, I did have an affair with Sasha, I fell in love and he sent me to hellI admit it, I had a moment when we lived together a lot and I was very much in love with her and one day she told me nothing to do, and nothing to do and it was over, “confessed the producer.

Also interesting: The CDMX prosecutor asks to attend to the case of Sasha Sokol

De Llano mentioned that Sasha’s mother was aware of the relationship, and was the one who also influenced it to come to an end.

“Mom was so smart, so relieved who obviously said ‘hey I don’t want him to be in your house anymore’ and stopped coming to my house and also the day that Sasha became disenchanted with that moment because it completely changed our relationship,” said Luis, who is 25 years older than Sasha.

The also creator of other successful pop groups such as Kabah and Garibaldi acknowledged that he loved the artist more than she loved him: “I don’t know if he fell in love with me or not, but I was in love for a while like that, but obviously one falls in love in the lives of many people”.

Luis showed that the reason why he was related to the singer of you will be the air It was because of a search for a father figure. “I was the one who suddenly took an affection for her. What were all the girls looking for? A kind of father image, I think that it was on that side”, highlighted the also brother of actress Julissa.

That was how De Llano told Rosado his version of events on the show. What if it were a relationship between two adults and without power in betweenWhen Sasha’s experience was known, the public was amazed that the subject was touched on so naturally.

It was on social networks where users attacked, in addition to De Llano, also against Yordi, well they criticized him for giving a voice to an alleged pederast and not having made any observations when the producer recounted what for him was a six-month courtship and not a four-year power relationship, as Sasha said in his statement two days later.

The public also asked him for ethics to remove the video where the son of actress Rita Macedo appears, saying that Sasha saw him as a father figure. While some accused him of be an accomplice to the alleged crime by keeping quietStill others joked that his show has uncovered more crimes than the authorities.

Could interest you: The song in which Sasha Sokol could have told the story with Luis de Llano

“Let’s see if Yordi Rosado really does the right thing. It is not a matter of popularity, it is a matter of integrity”; “Between the murder confessions of Palazuelos and the pedophile confessions of Luis de Llano, it is clear to us that Yordi Rosado’s program is quite questionable, it seems that he supports them”

“This man is a manipulative abuser pedophile, who will be your next guest? Sergio Andrade? “Delete the interview you did with that pederast. Do not be an accomplice and incoherent, that you dedicate yourself to guiding the youth”, “How is it possible that what I was saying about Sasha didn’t make any noise to you? What a disgusting dog that you continue to aggrandize this type of pedophile ape.”

“Yordi Rosado destroying careers!”; “Yordi Rosado pampers a pederast. Yordi, it’s sad”; “No mmn, do you think Yordi Rosado doesn’t know the kind of things they do on Televisa? Please, do not be so naive, since he deletes the video, ”are just some of the many comments that can be read, enrapturing the presenter.

The name of the announcer was also positioned in the trends, however he has not talked about the subject, in addition to the fact that the interview in question is still hosted on YouTube.