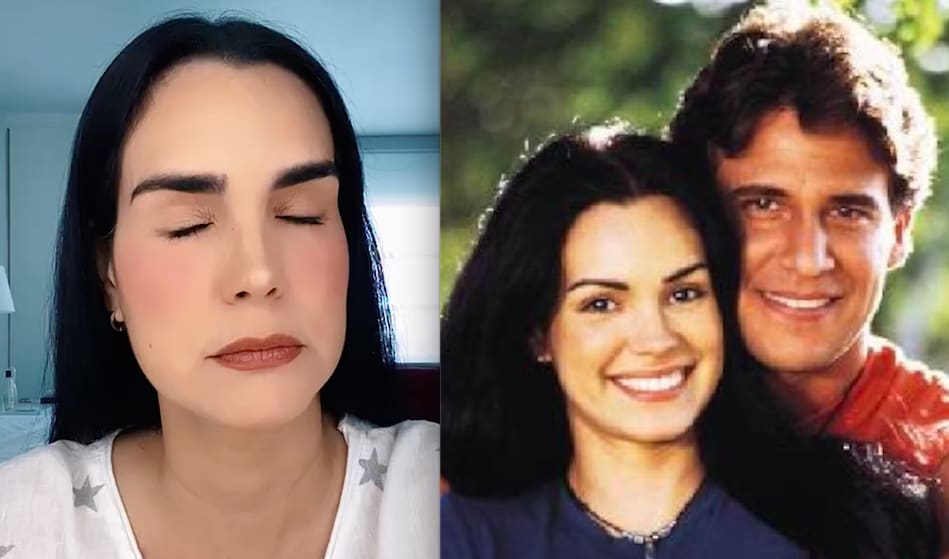 The actress Scarlet Ortiz, lived almost a month of terror due to a bad diagnosis that ended up being COVID and thus, the protagonist of ‘Secret of Love’ was on the verge of death, however, she went ahead and now in a video she makes a tremendous plea to people who are not taking care of the pandemic.

A few days ago, the actor Yul Burkle, husband of Scarlet Ortiz, struck with a video in which he narrates with his daughter how the soap opera protagonist is picked up outside the hospital, after a stay of several days due to the contagion he had from COVID in which his life was in danger.

“The reason for this video is to express the joy that I have today and to thank God above all else who allows me to be with my CARAOTICA @ortizscarlet these last days I discovered that it is to put a good face on the BAD times and I say it because I tried to laugh, joke and be me when inside I was collapsed knowing that my better half is very bad. My learning from all this is “that there is nothing greater than God … love and family” the rest of the material is worth nothing if we do not have the aforementioned in our hearts, “Yul Burkle wrote as a description.

In the images you can see how the actor and his daughter go to the hospital very excited to pick up the actress Scarlet Ortiz after several days serious for COVID, who visibly moved hugs them when she sees them and knows that she fought that terrible end that many people have had in the last year and a half of the pandemic.

“To hug them again, to breathe again for myself! Return!!! 20 days of Covid, one of the most difficult days of my life! And life taught me that each breath is today, today, what today is what you have to take care of, what is today you have to be thankful for! Tomorrow I will tell you a little! Thank you for your blessings! I love you !!! I’m good! WE DID IT! @yulburkle @barbarabrianaburkle I love you! “, the actress wrote before surprising in a video where she spoke about what happened.

Now, in a 7-minute video, Scarlet Ortiz used her Instagram account to move everyone with the horror story she lived after going to the doctor and being told to go home to rest because she had ‘nothing’ , when the days passed and it got worse and it turned out that I had COVID.

From her home, with her straight black hair and perfectly made up and visibly serious and in better health, Scarlet Ortiz wanted to record a video to tell her experience of terror: “I have already gone through a very bitter time for 22 days, I think toughest days of my life, but I’m fine, I’m negative, I’m still undergoing treatment at home but I succeeded… ”, he began by saying.

But in an effort to raise awareness about the seriousness that COVID and vaccines represent, Scarlet Ortiz recounted what she experienced: “… I got worse and when I decided after 10 days that we decided to go to the hospital, the first place I went to The doctor said that it was normal that I was not breathing well that my blood oxygenation was not low, that I went home to watch television and relax, that in two days I would be fine… ”, he commented.

“… In the state I was in, I could hardly walk or breathe anymore, my sister, thank God, decided together with Yul and me to take me to another hospital and that is where, thank God, they admitted me for difficulty breathing because immediately when they made me the plaque, I had very low oxygenation in my blood and then pneumonia in both lungs … there came a time when I could no longer breathe for myself, thank God I was never intubated, but it was all with a very strong oxygen mask “, the actress said.

And Scarlet Ortiz emphasized her state of health: “I couldn’t take it off (the oxygen mask) … sorry I’m still drowning a little … I just ask you to please take care of yourself, this is not easy, it was not easy to live it but what It is wonderful to be able to be alive, they were very strong days for me, for my family, we got over it, we freed it and we can’t lower our guard, ”he said, his voice cut short.

After almost dying from COVID, Scarlet Ortiz pleads with people

Scarlet Ortiz stressed that not everyone cares: “Yul was positive and had symptoms really only one day that was bad, on the contrary, I was really bad with the fortune that today I can be here before you and talk about it … Take care, to wear the mask, to keep our distance, there is fear and it is logical but that is not why we can empty our soul and let ourselves be carried away by it, “he said.

The comments of the people on the Instagram account of ‘Suelta la Sopa’ where the video was reproduced, they assured: “He does not believe in the vaccine, he gave covid, he looked very bad, he is afraid but he does not believe in the vaccine”, ” I liked how he expressed himself because he does not walk like the other artists promoting ignorance of the vaccine since they get the virus “,” It’s really strong I have 4 months that it gave me and I still feel tired “,” And think that some. . Nor do they believe in this pandemic ”. HERE YOU CAN SEE THE VIDEO OF WHAT SCARLET ORTIZ SAID ABOUT COVID

Paty Navidad’s sister declared the Mexican as mentally incapacitated to be able to save her from COVID-19, a disease that Paty swore and perjured was not real, telling the doctors that the actress had a brain tumor, which made her lose the notion of what he was saying and doing.

Go that things got quite complicated for the actress Paty Navidad, since after being admitted to causes of COVID-19, a disease that the Mexican swore and perjured did not exist, her sister Yadira declared her mentally incapacitated in order to save her from a worse reaction. Filed Under: Scarlet Ortiz infected with COVID

After the actress Paty Navidad was commenting through social networks that COVID-19 did not exist and that they were only “government inventions”, even commenting on the position she had regarding vaccines, it was at the end of July that it occurred to know that the Mexican had tested positive for COVID-19.

According to the portal TV Notes, It was reported that he had been infected during the recordings of the program MasterChef Celebrity Mexico, where after testing participants after a chef tested positive, that Thursday, after this test, the news of Paty’s contagion was released, causing them to evict the set and begin to sanitize it, and once again suspend the recordings . Filed Under: Scarlet Ortiz infected with COVID

After this, things have not gone well for the actress, since with the passage of time, her state of health became even more complicated, to such a degree that her sister declared her mentally incapacitated to be able to save her from a worse fall before this disease, since Paty Navidad refused to take any medicine.

Days after this event, the TV Notes portal took out an article where the actress’s current situation was discussed, commenting on how complicated this process has been for the Mexican, since as time passed, she needed medical help, since his oxygen was not very good to say. Filed Under: Scarlet Ortiz infected with COVID

“She thought it was just a flu,” Paty Navidad’s sister declares her mentally incapacitated

The portal was able to interview a person close to Paty Navidad’s family, where she commented on all the events that the actress experienced during her infection, beginning with the fact that the singer was still in the Interlomas hospital, connected to oxygen, however he was stable.

Given this, the news site asked the acquaintance how Paty had gotten to a hospital, since she, at the time, commented that she was fine, to which she replied: “It was her sister Yadira, who in an attack of Desperation decided to admit her, because Paty refused to take medicine and her health was getting worse every day ”. Filed Under: Scarlet Ortiz infected with COVID

“When the doctors arrived, Paty Navidad thought they were going to kidnap her”

“After believing that it was only a flu, he only treated it with Paracetamol and Teraflu, and because he did not follow the doctors’ instructions, he reached the point where his lungs did not give him any more,” said the person close to the family for the portal TV Notes. Filed Under: Scarlet Ortiz infected with COVID