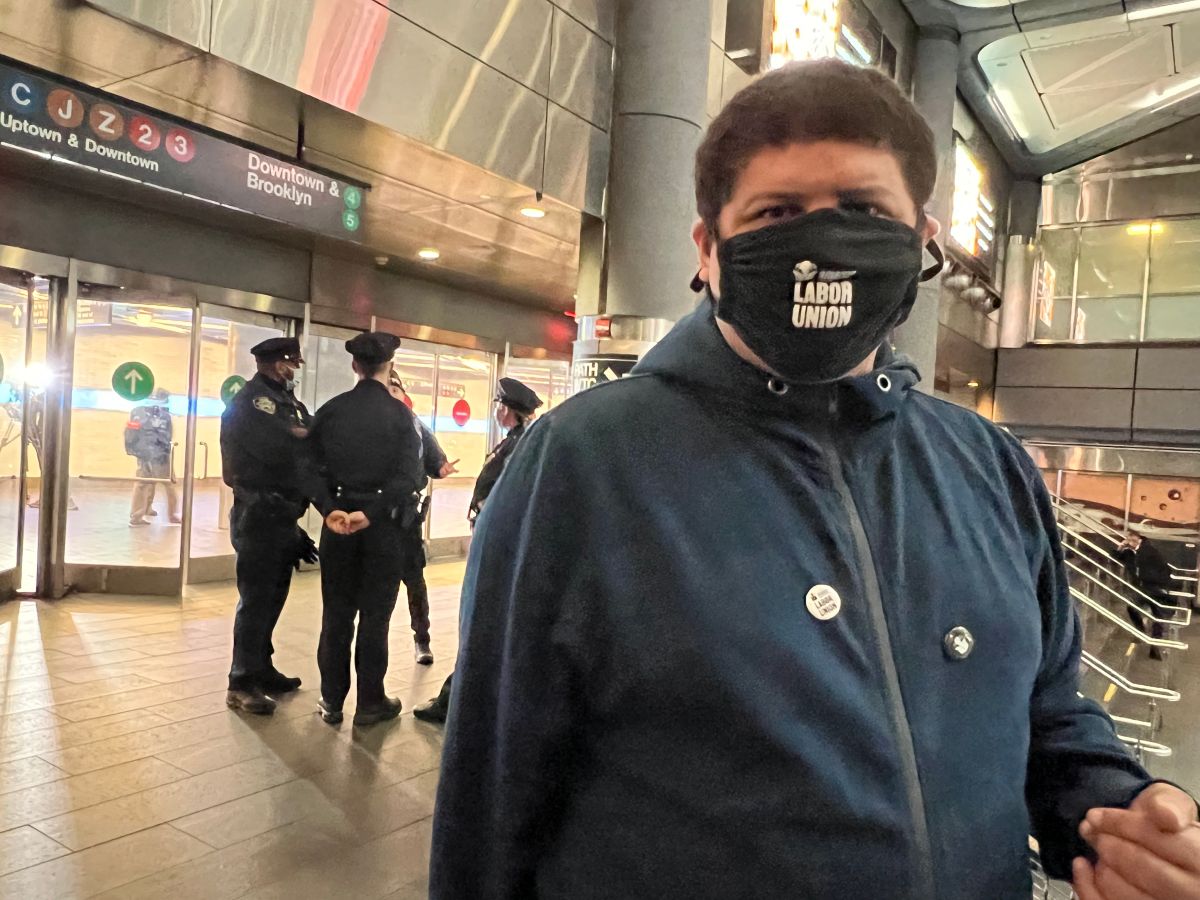 Last February, after an incessant wave of violent attacks at different points on the New York City Subway, which included people stabbed, others brutally beaten, and even three passengers thrown onto the train tracks, the Mayor Eric Adams presented a complex plan to return the transportation system security biggest in the world.

With a loud tone and announcing the creation of 30 Joint Response groups between police officers, social workers, doctors and psychiatrists, the backbone of the initiative was to identify homeless and mentally ill people who wander and sleep on trains and stations, accused of affecting order and security, get them out of the system and connect them with shelter services and health care.

And when fulfilled this monday march 21 the first month of the entry into force of the train safety plan, with which Mayor Adams assured that little by little New Yorkers would begin to see a safer transportation system, violent acts, crime and fear among the passengers continue to be daily bread. The first part of the plan included the deployment of teams in lines A, E, 1, 2, N and R as a priorityas well as 2,500 policemen watching and making a presence in wagons and platforms.

But the perception that insecurity continues to increase It doesn’t just come from cases like the hammering attack on a woman at the Queens Plaza station in Queens a few days ago, the stabbing of two women at stations in Brooklyn this month and the knife attack on a 15-year-old boy Sunday of the previous week on the platform of the D train at the 145th Street station in Hamilton Heights, but police reports continue to rise.

Reports from the Mayor’s Office reveal that in the first week more than 150 people in need were reached and help was provided to connect them with services and shelter environments. 22 people; likewise, 1,553 TAB (Transit Adjudication Office) tickets were issued, among others, to those who entered without paying, 455 people were expelled from the system, 143 arrests were made in the subway and 18,123 inspections of seasons.

The Office of Mayor Eric Adams revealed that this week they will present more precise data on the impact that the subway safety plan in their first month, and how they have handled the goal of helping connect the homeless and mentally ill with services, but NYPD figures show that the outlook is still very worrying.

73.3% increase crimes in the Subway

And it is that while crime in general in the Big Apple increased last month by 58.7%, crimes and violent acts in the meter increased by 73.3%, when the flow of passengers is still much lower than it used to be in times before the COVID pandemic. Only in February were reported 182 Subway Murders, while in February of last year the figure was 105 events, and in the last reported week there were more than 38 crimes in the transportation system.

and although Mayor Adams himself I had already said that crime on trains It can’t be solved overnight. passengers like Jonas Dominguezoriginally from Veracruz, in Mexico, are anguished and even frustrated.

“I think that no one in the city expected that in a month all the crime in the subway would be fixed, but if I thought that at least I was going to see more support from the police at night and early in the morningwhich is where one feels most insecure, but at least I have not seen that,” says the Mexican, who travels late at night on the E train. “I have not noticed any improvement, from time to time one continues to see aggressive people pushing others in the wagons and the ‘homeless’ continue the same on the trains, as if nothing had happened. What’s more, I see policemen, many of them, in Manhattan, but not in stations in Queens and Brooklyn, which is where there are more attacks”.

Yolanda Indriagowho travels on subway line 2, says that in the last 30 days she has noticed more police, but intermittently, which does not allow her to feel completely safe.

“Sometimes you see a lot of police officers and sometimes you don’t see any, and on weekends and at night it’s as if they didn’t exist,” said the Colombian. “I think this is such a big problem that it warrants urgent measures and no more wipes of warm water. It is not just about putting some policemen in the subway, but taking action, and as it happened in the 1970s here, that police officers be assigned to all the trains that run through them 24 hours a day. So many attacks deserve it.”

JasonAnthony, who described himself as a patient with mental conditions, and who is a community activist, mentioned that Mayor Adams’ plan has good intentions, but it is doomed to failure if all sides are not addressed at the same time.

“It is not enough to say we are going to get the homeless off the train, because the majority who live in the system, they don’t want to go to shelters, because they are dangerous and unsafesaid the Puerto Rican. “I myself lived in several with horrible conditions. I also believe that the police are not yet well trained to do this job well. They must be more sensitive, but at the same time enforce the law or else this is going to be a disaster.”

But the complaints not only jump from the daily users of the transport system, but also organizations that defend the rights of the passengers consider that the security plan is lame.

Derrick Holmesdigital strategist organization ‘Riders Alliance‘, mentioned that in order to achieve a real and effective change in terms of safety in trains and stations, it is urgent to invest in greater and better provision of public transport service in the Big Apple.

“If the Mayor and Governor want to change the perception of those who do not feel safe on the subway, the answer is safety in numbers. Funding frequent, all-day subway service can create a safer environment for riders, by increasing the number of riders, thus the number of watchful eyes on the system, and reducing the amount of time spent people spend inactive on the platforms of the stations”, assured the activist.

The Riders Alliance spokesperson added that other fundamental components in the equation must be quick and effective access to health and shelter programs.

“This must happen together with the improvement of the immediate access to medical care and permanent housing for people who are homeless, and without echoing social prejudices against people living in poverty and with mental health problems,” said Holmes.

Adams: “Solutions will be a long way”

However, given the perception that the results against crime have not been sufficient in the first month of implementation of the plan, since the focus would seem to be more focused on combating homelessness within the transportation system than violence, Mayor Adams has defended the progress that has been madebut recognized that it will be a long road.

“We are days into the first part of a long-term effort to connect New Yorkers to services and put them on a path to permanent housing and stability. The systemic challenges facing people who are homeless and living with serious mental illness have developed over decades and it will take time to fix them“said the local president.

“But our teams are on the subway every day operating and implementing this plan. New Yorkers should know that we’re working every day to make our subways safer”, added the Mayor.

The Metropolitan Transportation Authority (MTA) did not refer to the effects that the Mayor’s security plan has had in the subway system in the last month, and one of its spokespersons stressed that this initiative is an effort promoted by New York City Hall and the NYPD.

Regarding the work of the security plan, a spokesman for the Mayor’s Office explained that the inter-institutional teams go through platforms and subway cars, transit centers and stations at the end of the lines to offer services and support to those who experience mental health crises and lack of living place.

Additionally, at the City’s request, he said the MTA and NYPD are working together “to more comprehensively enforce the MTA Subway System Code of Conduct rules” designed to make the subway for travel and not for subways. for sleeping.

Crime in the NYC Subway and data security plan: