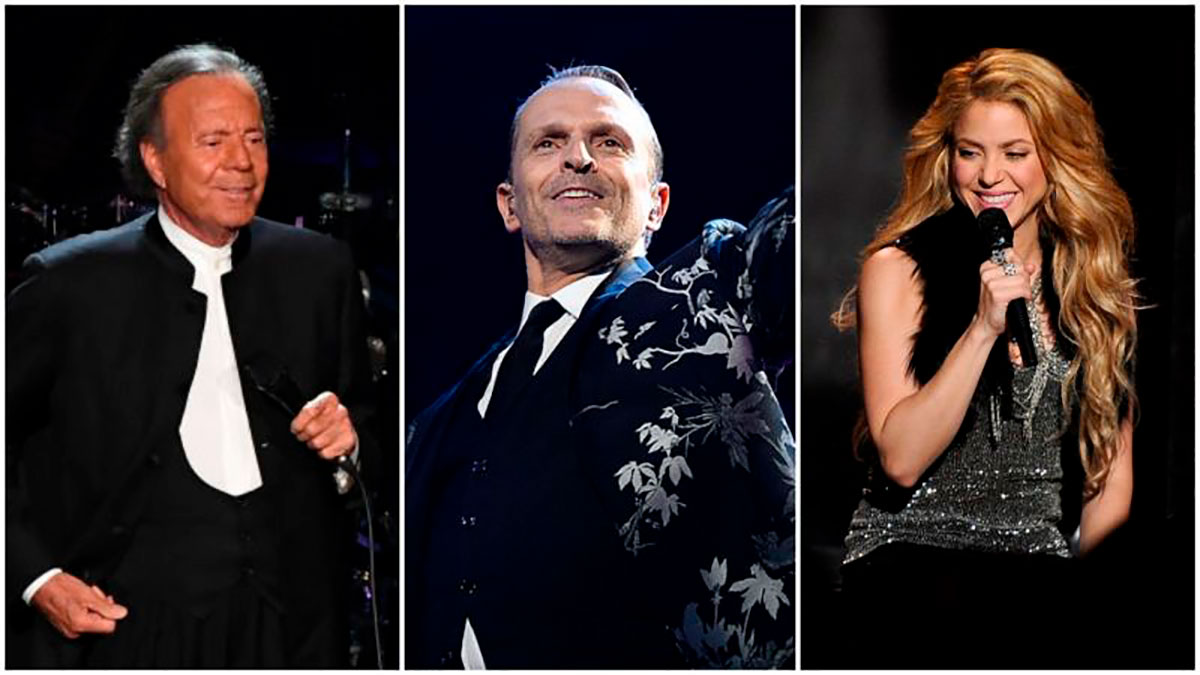 The Pandora Papers, a leak of almost 12 million documents revealing hidden wealth, tax avoidance and, in some cases, money laundering, not only splashes on businessmen, politicians and world leaders, but also celebrities.

Singers like Spanish are added to the 300 figures of the public sector Julio Iglesias and the colombian Shakira, or soccer stars like the Argentine Angel di Maria or spanish Pep Guardiola.

The journalistic work, coordinated by the International Consortium of Investigative Journalists (ICIJ) and with the participation of more than 650 reporters from different media -including the BBC-, exposes 12 million documents from 14 companies that They work in tax havens such as the British Virgin Islands, Panama or Switzerland, among others.

The ICIJ said that this investigation is “opening a box [de pandora] About many things”.

These are some of the celebrities whose names appear in the investigation.

According to the Pandora Papers, the 78-year-old Spanish singer Julio Iglesias has 20 companies in the tax haven of the British Virgin Islands: 16 with his wife, the Dutch Miranda Rijnsburger, and four others only in his name.

The investigation also notes that the artist used the money generated by five of those companies to buy luxury homes on Indian Creek, an island north of Miami, known as the “Bunker of the rich” for being a multi-million dollar resort in the United States.

According to data from the official Miami-Dade County registry released by the Pandora Papers, the current value of these homes is US $ 112 million.

In addition, according to the investigation, the singer used another of those societies offshore to purchase a private plane and six more to buy properties valued at nearly $ 4 million.

All are controlled by a trust – an institution that allows you to control your assets abroad -, the Julio Iglesias de la Cueva Revocable Trust, created in 1995 in the British Virgin Islands.

The singer has not spoken recently on the matter, but in 2015 he told the Spanish journalist Jordi Évole: “I have never stopped paying a bloody tax anywhere in the world; where I sing, I pay my taxes ”.

According to his representative, Juan Velasco, the musician has not had a tax address in Spain since 1978.

The three companies were inaugurated in April 2019, managed by the Panamanian law firm OMC, while the Spanish Ministry of Finance investigated their finances.

The singer of “Hips Don’t Lie”, based in Barcelona (Spain) for ten years, faces a indictment of tax fraud amounting to US $ 16.83 million.

“The fact of having companies abroad is based on a purely question operational and commercial, and in no case to enjoy any tax advantage or advantage “, say their legal representatives.

According to Pandora Papers, the musician Miguel Bosé is listed on the 2016 share certificates of a society offshore created in Switzerland, Dartley Finance, through a private banking entity, the Union Bancaire Privée (UBP) of Geneva.

At that time, the singer resided in Panama, where he moved in 2014.

Dartley Finance was created in 2006 and continues to be active. For ten years, the company was controlled by bearer shares, but this type of document was banned in Panama in 2015 for its practice in concealing assets.

The law firm that manages the case, Alemán Cordero Galindo y Lee (Alcogal), would have been forced from that year to assign the “real” shareholders to the documents related to the company. The name of Miguel Bosé appears only since 2016, explains the Spanish newspaper “El País”.

Bosé, 65, born in Panama and resident in Mexico since 2018, accumulates problems with the Tax Agency in Spain, which reviews the accounts of Costaguana SL, the company with which the singer manages his interests in Spain, for alleged tax deductions taxes.

The company was founded in March 1984 under the name Miguel Bosé SA months before the singer released “Bandido”, one of his most successful albums. He then changed his name to Costaguana SL.

Neither the lawyers nor the representatives of Bosé responded to questions from the Spanish media participating in the investigation on these issues.

The icon of British pop Elton John, 74, one of the most important promoters in the fight against HIV / AIDS, has more than 12 companies registered in the British Virgin Islands, according to journalistic investigation.

Her husband, David Furnish, is the director of all of them.

Richard Starkey (Ringo Starr) would have created two companies in the Bahamas that were used to acquire real estate, including a “private home” in Los Angeles.

It is also associated with at least five Panamanian trusts: three of them with life insurance for their children and another with income for royalties and live performances.

Representatives of the British artists did not reply to ICIJ’s questions.

Say Maria, who currently plays for Paris Saint-Germain, created a company offshore in Panama in 2009, a company with an acronym without headquarters or employees linked to a bank account in Switzerland that manages millionaire income. It is what is known as a “screen society”.

Sunpex Corporation Inc it channeled advertising revenue from brands such as Adidas and Coca-Cola and managed investments in financial assets. It has only one shareholder: Di María.

The soccer player would have managed more than US $ 9 million through that company to exploit his image rights.

Di María acknowledged in 2017 having committed a tax offense before the Spanish Treasury for funds managed through Sunpex between 2011 and 2013, and paid a fine of more than US $ 2 million.

After that sentence and his departure from Real Madrid, the footballer continued to manage advertising contracts through the company offshore, according to the research.

“Society has always been declared in England and in France. It is a totally legal strategy“, Said his representatives to the ICIJ about the countries in which Di María has played since his departure from Spain.

The player’s environment explained that he used the Panamanian company for a “recommendation” made by his accountant in 2009, and that the footballer “did not know that this recommendation was not reasonable for the Spanish authorities.”

On the other hand, the former Argentine footballer Javier Mascherano, Former captain of the Argentina team and Barcelona, ​​he resorted to companies offshore to invest abroad, says the report.

The athlete had two partnerships in the British Virgin Islands between 2013 and 2016 with which he made real estate investments while living in Spain, according to the Pandora Papers.

The Barcelona icon and current Manchester City manager is another soccer star on the Pandora Papers.

The documents reveal that Guardiola He was the owner of an account in the Private Banking entity of Andorra (BPA) until 2012. That year he accepted an tax amnesty approved by the government of Spain to regularize funds in Andorra, another tax haven.

“The tax amnesty was controversial because it allowed many fraudsters to launder money at a reduced cost,” explains Jesús García Bueno, a journalist for El País who specializes in judicial information.

In total, Guardiola regularized in 2012 more than half a million dollars. Until then, the 50-year-old ex-footballer had not declared any of the funds he had in the Andorran account.

Lluis Orobitg, the coach’s representative, said Guardiola only used the Andorra account to enter the salary he received from the Qatari club Al Ahli, where he was between 2003 and 2005.

Guardiola also appears in a document from the Alcogal law firm as attorney-in-fact for a Panamanian company, Repox Investments, created in 2007. Orobitg said that Repox has nothing to do with Guardiola’s economic interests in Panama and that this company had no activity.

The athlete has not made recent statements but in 2015 he said in an interview the following: “I have paid my taxes from the first day to the last, which many political parties cannot say ”.

The German supermodel Caudia Schiffer, 51, is another celebrity featured on the Pandora Papers.

Schiffer appears as a beneficiary of two companies offshore: 51 Red Balloons Holdings Limited and The Roxy Trust, created in the British Virgin Islands, and four more companies created in 2017.

The purpose of the companies, according to the journalistic investigation, would have been to administer the rights of their commercial brand.

According to the German media Westdeutscher Rundfunk and Süddeutsche Zeitung, the model appears in the documents with her married name, Claudia De Vere Drummond.

Schiffer’s legal representatives say that his taxes are up to date in the UK, where he currently resides.