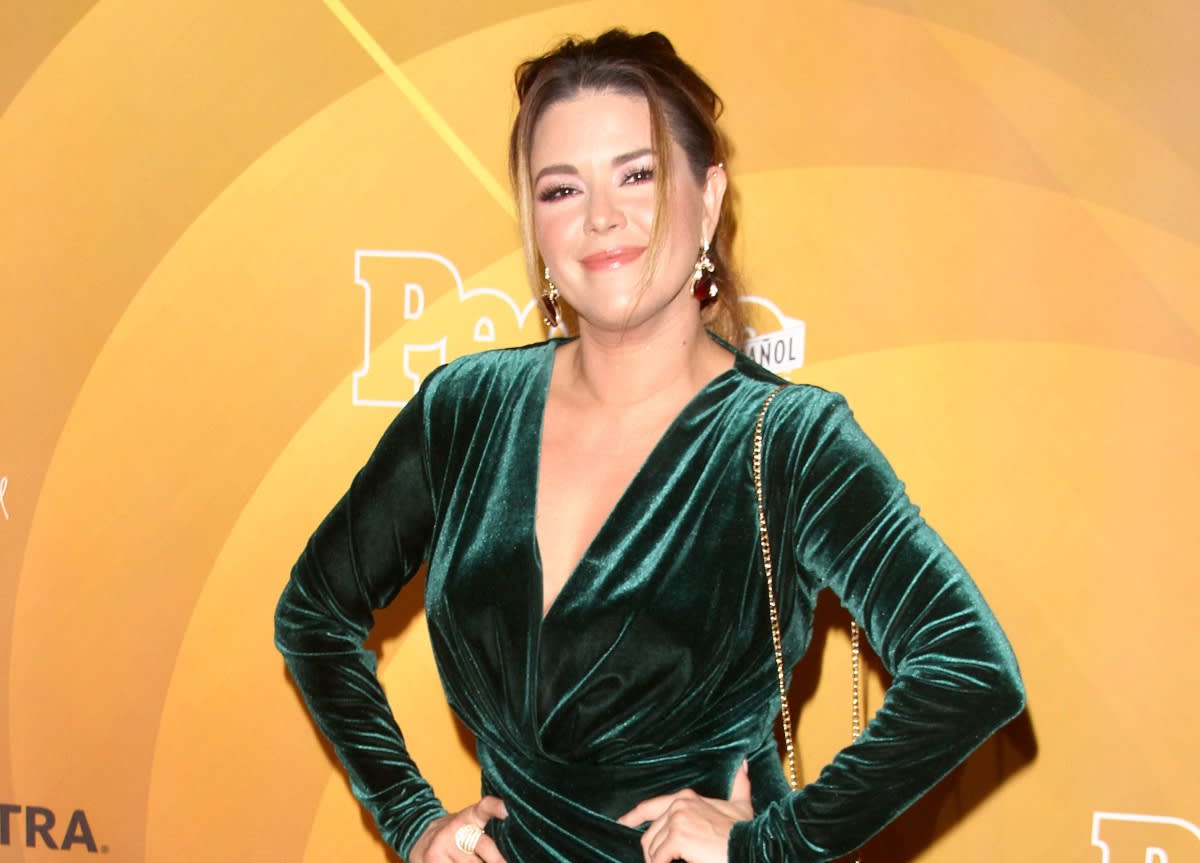 Alicia Machado critic Gaby Espino. The famous reality show on Telemundo ‘La Casa de los Famosos‘ is giving a lot to talk about, since the celebrities who are competing for the first place have generated a lot of controversy for their ‘strategies’ to win the show. Alicia Machado is one of those who is in the eye of the hurricane.

Since her arrival on the program, the Venezuelan has been involved in the controversy on different occasions, it should be remembered that she recently had an altercation with Gaby Spanic who was previously one of her best friends for 25 years. Now Machado goes with everything against a compatriot of his, according to People en Español.

Undoubtedly Alicia Machado has managed to win over the public during her stay at the Casa de los Famosos, which is why many already see her in the grand final. It may all be because she has shown herself as she is and that she always says what she thinks, a clear example was what she said about her compatriot Gaby Espino.

It should be remembered that Gaby was very questioned during her appearance on the Latin Billboard red carpet, for the transparent dress she wore which made her underwear stand out. Many users told her that she looked pretty slim in this accolade.

During a talk with one of her partner on the Telemundo reality show, the Venezuelan, Alicia Machada harshly criticizes her compatriot Gaby Espino. Apparently the body of his compatriot did not like him at all during his presentation at the Latin Billboard ceremony.

“How skinny the Espino looked. I don’t think she looks good, she already looks sick, in my humble opinion, I don’t like it. Alicia mentions that being thin doesn’t make her look prettier.

Alicia Machado critic Gaby Espino: “She was not like that”

“She had a gastric bypass, imagine you… because of the obsession of being anorexic. Or do you think it is based on smoothies? She was not like that, you could see her little hip like that (gesture), she looked like a 15-year-old girl, her face looks very haggard, what you can see are her teeth, ”she continued saying about her compatriot.

Previously Gaby Espino had mentioned that she prepares to be in shape daily, she even performs boxing to be physically healthy. So far he has not responded about Alicia’s words, but everything seems to indicate that she is happy with her new figure. TO WATCH THE VIDEO CLICK HERE.

It should be remembered that the actress and television presenter Gaby Espino also captured the attention during her parade on the red carpet of that ceremony. The Venezuelan wore a transparent dress like Adamari, but unlike the Puerto Rican Gaby if she wore underwear and made her look in the best way.

But despite looking very beautiful, the social network users said something else: “They no longer want to dress”, “To be beautiful and elegant there is no need to show so much, beauty is not in that, if they were already born beautiful they do not need to reach so much that depends on the occasion “,” She would not have put anything where the glamor was left, she is beautiful she does not need that wardrobe ”.

A few weeks ago when the departure of Kimberly Flores was announced, after her husband Edwin Luna went for her, stating that he and his children needed her back at home. After this, it seems that now Alicia Machado, with whom Kimberly had strong encounters throughout the reality, has already found a new person with whom to discuss.

According to a video published by the Instagram account @escandalo_o, it is possible to observe how the Venezuelan model, Alicia Machado attacked her former friend Gaby Spanic, with whom, according to Alicia, she had been friends for more than 25 years but that the actress had thrown them away.

Alicia Machado critic Gaby Espino: “I behave as I please”

“Look Alicia”, begins Gaby Spanic, the new “enemy” of Alicia Machado in La Casa de los Famosos, “I have nothing personal with yesterday’s decision, I believe that here no one has the need and obligation to save anyone I don’t want you to take it personally, far from it, but your attitude is not the most favorable ”.

After this, Alicia Machado did not remain silent and attacked the protagonist of several Mexican soap operas: “Aha, aha, I behave as if I wanted to,” to which Gaby repeats that she once but I had nothing against anyone: “I was a leader and I did not do this because I have something against someone”, after this, Celia Lora intervenes and tells the actress “not to take it personally” and that and better “ignore him.”

“Gaby did not make the best decision”

However, these words did not serve to calm Gaby Spanic, who was already very upset by the attitude that Alicia Machado was taking against her, repeating that the truth did not do any of that because she was against her, to which once again Alex Lora’s daughter argues that the Venezuelan was always like this: “First she treats you like this and then she comes to you as if nothing else, make up your mind, you are or you are not.”

Faced with this video, many followers of the escandalo_0 Instagram account began to arrive, stating that on this occasion Gaby’s decision to save Celia Lora instead of Alicia had not been the best: “Celia is dying of she laughs to herself, she knows that she in Gaby’s place would never have saved her. Gaby made a mistake, she doesn’t even realize that Celia talks about her behind her back. And Alicia has the right to be upset ”. Filed Under: Alicia Machado critic Gaby Espino

Why did this fight originate?

As mentioned a few lines above, this new rivalry between Gaby Spanic and Alicia Machado originated after Gaby became the leader of La Casa de los Famosos, giving him immunity and the power to choose a member to save him from the nomination, between They were Celia Lora and Alicia Machado and the soap opera actress decided to use her joker to save Alex Lora’s daughter, which caused great outrage in the former Miss Universe.

According to the INFOBAE portal, and with Alicia Machado herself, before entering the reality show she had already agreed with Gaby, agreeing that both were going to help each other to continue as long as possible within the contest, however, Spanic decided use your vote to save Celia Lora, who for a few days has had a great enmity with Alicia. Filed Under: Alicia Machado critic Gaby Espino

Before they were friends

The portal also reported that during a conversation with the singer Pablo Montero and Cristina Eustace, Alicia Machado expressed her anger and indignation at the situation she was going through with her now enemy, Gaby Spanic, whom she considered a great friend for several years. years and for which she was very upset with her:

“I know why she did it, I know Gabriela better than all of you put together. I know Gabriela, I know her very well. It was a very smart start, but she doesn’t want me here in this position. One of the two is going to shine, and it is going to be her ”, he commented. Alicia maintains that Celia only approached Gaby to manipulate her and win her vote with which Alex Lora’s daughter got immunity, while the Venezuelan will have to be saved by viewers. Filed Under: Alicia Machado critic Gaby Espino. VIDEO HERE

The Mexican singer, Pablo Montero breaks down in tears after the discussion he had with Celia Lora during the reality show on the Telemundo network La Casa de Los Famosos. The actor also in his confession affirms that he had always been an impulsive person, but that with the passage of time he made him mature and change, what is happening?

In one of the most recent fights the Mexican music singer Pablo Montero was involved, who burst into tears in the confession room after the strong argument he had with the daughter of guitarist Alex Lora, where he was called a bit of everything, hitting hard on his ego. Filed Under: Alicia Machado critic Gaby Espino