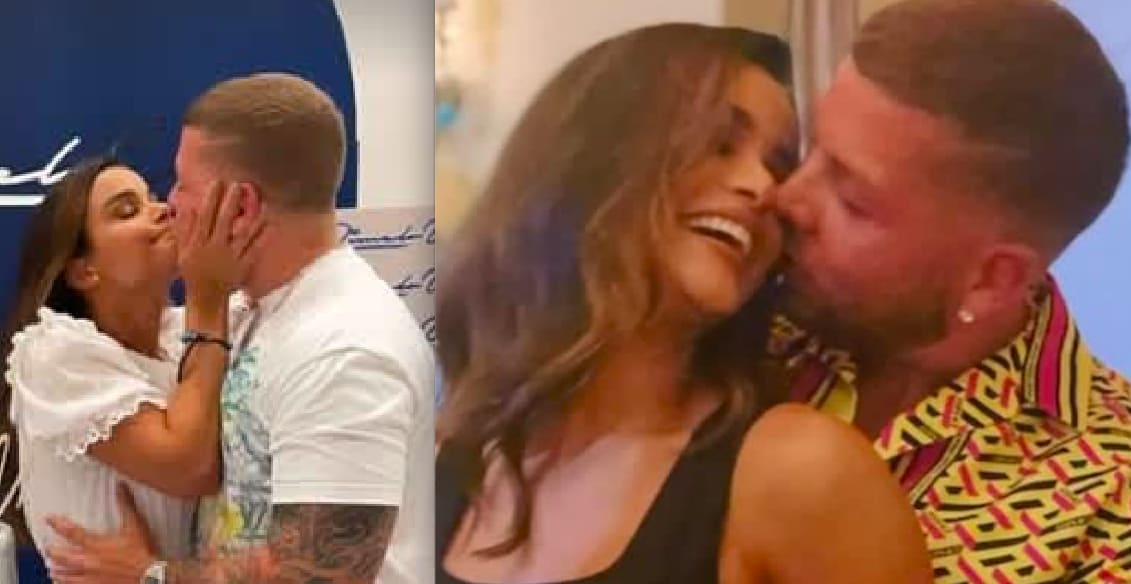 Clarissa Molina pregnant. The famous Dominican model, Clarissa Molina is in a stage of her life where love is the only thing that matters, on different occasions she has been seen quite in love with her boyfriend Vicente Saavedra. Despite her dark past, Molina makes it known that she is the love of his life, but why is she so in love?

In recent days the couple in love celebrated Vicente’s birthday together, and it was a couple of controversial images that the young man shared on his Instagram account that arouse suspicion. In several snapshots, the driver of El Gordo y la Flaca appears touching her belly.

Previously, the 30-year-old model had shared an image where she wrote a romantic message to her partner due to her birthday. Internet users immediately did not let the occasion pass and rumors of an alleged wedding began, thanks to the love they have for each other.

Through the Instagram account of Clarissa Molina’s boyfriend, a series of photographs were shared, of Vicente Saavedra’s birthday celebration. But those images raise suspicions of a possible pregnancy, since the Dominican touches her belly on several occasions.

“Thanks god! Thank you all for your good wishes and for the not so good ones you continue to motivate me to be better, definitely thanks. Thank you @clarissamolina my queen for two weeks of non-stop celebrations, thank you! I love you so much! ”Was the message he left in his post.

Clarissa Molina pregnant: “Do you notice a belly?”

Even in the social network profile of Gossip No Like hosted by Javier Ceriani, he shows the images where the 30-year-old driver touches her belly on different occasions. So far they have not confirmed anything neither the Dominican nor her partner, but the ‘evidence’ is there.

“Clarisa Molina is celebrating Vicente Saavedra’s birthday, but apparently not only that, but also what could be the arrival of a baby. And it is that her boyfriend shared photos where the collaborator of El Gordo Y La Flaca is at all times clutching her belly as an instinct of what could be a pregnancy. What do they say…. Do you notice your belly? ”, Was what was said in the publication.

Clarissa Molina pregnant: “She ate the cake before recess”

Internet users immediately began to react to the post, leaving their opinion on the matter: “Al Rato is going to be like Ninel Conde”, “I don’t think they’re sweaty”, “he ate the cake before recess”, “Love makes make you fat ”,” Maybe he is not yet 3 months old. And she still doesn’t want to announce it ”.

“How fast whoever saw Ninel from Univisión”, “But she just uploaded a photo in a bathing suit with a belly flatter than a board”, “Ayyy noooo, it would be good hangs … if he does that “,” They said the same about Belinda, but and if she is pregnant, her problem “,” Santa Clarissa does not break a plate “, were some comments.

Clarissa Molina pregnant: “In this and the other life I choose you”

A few days ago in a shared photograph you can see the romantic couple enjoying a day together at sea, Clarissa wears a sensual blue bikini while kissing her partner on the cheek. For his part, Vicente Saavedra is behind her without a shirt posing for the camera.

“In this life and in the next life I choose YOU a million times! May God always fill you with a lot of life and health, and continue to be the great human being that you are, noble, with a great heart, a good son, a great father, and always ready to give the best of you. Happy Birthday my love!!! I love you Vi! ”, Wrote the model.

Some users took the opportunity to congratulate the couple on their relationship and Saavedra: “I’m very happy to see you happy. Enjoy your relationship and many blessings ”,” How beautiful Clari! God bless you always. How nice to see him celebrate his love and, happy birthday to him ”,“ Happy birthday to you! More Health, more love and more prosperity in happiness “.

Even Clarissa Molino’s boyfriend left his message of love for his beautiful partner: “Today again I reconfirm that you came to change my life !! Thank you for your love, respect and honesty! Thank you my queen for so much thanks for your love so beautiful! I love you here and in the next life too! ”Said Vicente.

Through the Chamonic 3 Instagram account, the image of the 30-year-old driver, Clarissa Molina, was shared where she is seen to be quite in love with Vicente Saavedra. They mention that the model is so blinded in love that they even claim that it smells like a wedding between the couple.

In the post they say that they both look completely in love and a wedding is expected soon: “@clarissamolina Congratulates her boyfriend @saavedravicente on his birthday, with this romantic message, it smells like there will be a wedding very soon because he also talks very nicely about her ”, They wrote in the publication. Filed Under: Clarissa Molina Pregnant

“Poor girl doesn’t know what she’s up to”

The negative messages were present: “He already gave him a promise ring”, “I need not say that what he likes most about him is his wallet, because that girl always noticed that she was interested in wanting a rich man”, “Poor The girl doesn’t know what she’s up to ”,“ After a while she’s going to be like Inés and then they hide, the ridiculous no longer give interviews ”.

Despite the criticism received, there were also those who defended the couple: “It is incredible how the same women attack another saying that for money or that he is a livelihood, live and let live”, “How much frustration there is in the air, either for Let her enjoy it ”,“ Envy on the surface ”, were some comments. Filed Under: Clarissa Molina Pregnant

Just Javier Ceriani and Elisa Beristain from Chisme en Vivo discovered the identity of Clarissa Molina’s boyfriend, the host of ‘El Gordo y la Flaca’ had no choice but to accept it and tell it on her show, but now new secrets are being uncovered scored by Vicente Saavedra when we have the information.

When Clarissa Molina said with regret and emotion that she was very enthusiastic and that Vicente Saavedra had even given her a ring to ‘formalize’ the courtship, but not an engagement ring, people began to warn her about the serious past that Ozuna’s ex-manager has, Well, his ex-wife is terrified of him. Filed Under: Clarissa Molina Pregnant

Vicente Saavedra has a murky past with his ex-wife

According to the ‘Live Chisme’ program, it was where they realized the various scandals and problems in which Clarissa Molina’s boyfriend was involved a few years ago, who is warned to think well before falling in love more, because things they could end not in a good way for the driver.

The strongest thing is that the ex-wife of Vicente Saavedra and mother of one of his daughters, is terrified of him and so much so that this demand in the way and even assured that if something were to happen to his physical integrity, he is directly responsible to the now boyfriend of the host of ‘El Gordo y la Flaca’. Filed Under: Clarissa Molina Pregnant