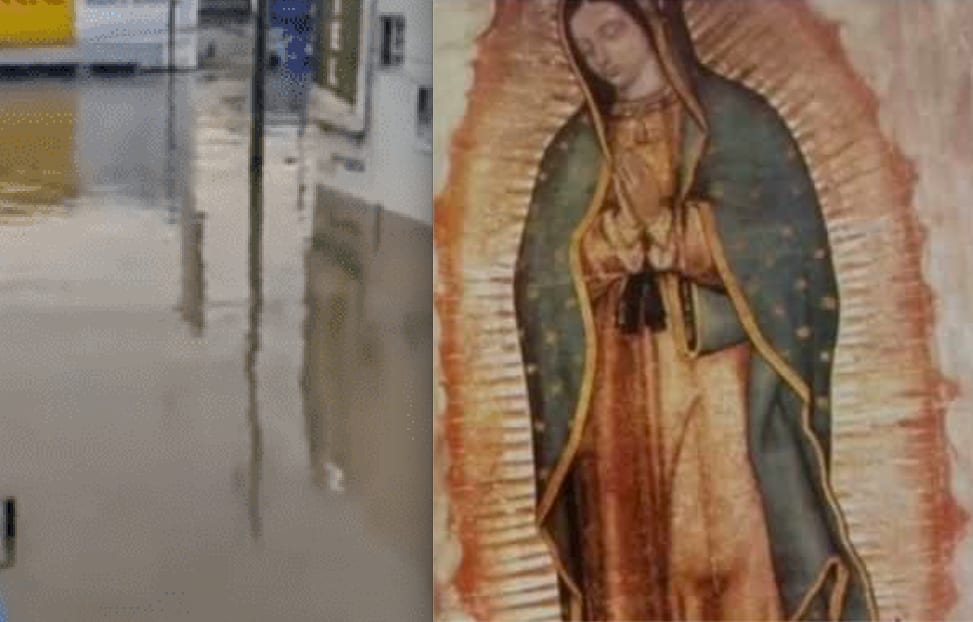 Silhouette Virgin Guadalupe floods. The image of the Virgin of Guadalupe has become a common appearance in Mexican states, since several users constantly share the silhouette of the Virgin Mary in different parts of social networks. They consider this event a miracle for Mexicans.

As is a tradition every December 12, millions of people devoted to the Virgin Mary thank her by singing the mañanitas and putting their candle, the place where most people go is the Basilica of Guadalupe in Mexico City, where even celebrities go to visit her.

Silhouette of the Virgin of Guadalupe found

On this occasion, after the floods that have occurred in Mexico, due to heavy rains, a family while moving the rubble found the silhouette of the Virgin on a piece of wood. This after cleaning in Tula, Hidalgo, Mexico, according to La Jornada.

It should be remembered that the rains began around 6:00 in the afternoon local time on Monday, September 6, which caused the overflow of the Tula River, which left floods that in some cases exceeded two meters in height. This brought with it several deadly consequences.

Virgin Guadalupe flood silhouette: It was on a piece of wood

The miracle happened when a family was cleaning up after the September 6 floods in Tula, Hidalgo, Mexico. The members, while removing some pieces of wood, found the image of the Virgin stamped on one of the logs.

The faith of the family is so great that they took the piece of wood and now they have it hanging on a wall, since they consider that the Virgin Mary protects them after the great disaster left by the heavy rains in this month of September, which left several killed by its passing.

So far the family has kept intact the image that appeared on the piece of wood collected from the rubble, it is hanging on the wall of their home. Mexicans who suffered from the natural phenomenon now mention that the silhouette gives them the strength to move forward.

He has even said that since they found the image they have been receiving daily visits to see the Virgin, even the municipal president has come to his home. In the same way, he affirms that several neighbors have brought him flowers and even pray to him, they even have in mind to build a special place for the silhouette to stay. TO WATCH THE VIDEO CLICK HERE.

It should be remembered that the authorities confirmed 16 deaths so far, after a strong storm that caused the Tula river to overflow, in the state of Hidalgo, where an IMSS hospital with newborn babies, children and even COVID patients was the most affected.

“At the time of the event, there were 104 IMSS workers and 56 patients hospitalized for different reasons, several of them, about half, due to COVID issues,” said the official. in a video broadcast through social networks. He indicated that at the time the hospital was flooded, the electrical power of the entire municipality collapsed and that damaged oxygenation and the building’s power plant was flooded.

Laura Velázquez, head of the National Coordination of Civil Protection, reported that the authorities of the Armed Forces, the National Water Commission and the IMSS, traveled to the place. That morning, the president of Mexico, Andrés Manuel López Obrador (AMLO), reported that an emergency plan was activated in the region and promised aid to the victims.

“It is raining a lot, yesterday we had many floods in the country, this is the month that rains the most, we must be vigilant. Today we are going to be helping and supporting families that need it, ”said President AMLO. Meanwhile, the National Guard reported that it implemented its own emergency plan to support families affected by the storms and floods in the Municipality of Tula, Hidalgo.

He stressed that during the early hours of this Tuesday, elements of the Public Security Secretariat of Hidalgo and the municipal Police, carried out tours to help the residents who had their private homes affected. For his part, the governor of Hidalgo, Omar Fayad, announced that so far five temporary shelters have been set up in the area.

Federal and local elements maintain the rescue and evacuation actions of the inhabitants of the city of Tula due to the flood that occurred since Tuesday night and after the rain, including patients from the Mexican Institute of Social Security (IMSS) hospital, who They are transferred to the regional hospital.

They rescue babies with ropes

The IMSS is one of the places most affected by floods and rain, which caused a failure in the oxygen supply. In addition, the waterlogging prevented medical attention. Given this, patients have had to be transferred to other hospitals and rescued in boats, according to the El Universal agency.

Some users of social networks have spread the video of how they transfer babies in incubators with ropes. The authorities have called on the population to avoid going out into the streets at the prevailing water level. In addition, the telephone service is collapsed. Filed Under: Virgin Guadalupe Flood Silhouette

Through his social networks, President López Obrador called on the population of the Valley of Mexico that lives in low areas to take shelter in high areas, in shelters, with family or friends. “A lot of water has fallen throughout the Valley of Mexico and it will continue to rain. Those who live in low-lying areas, move to shelters or high places with family or friends for the time being ”. Filed Under: Virgin Guadalupe Flood Silhouette

“What is urgent is oxygen”

Send oxygen because patients are dying, was the clamor from the General Hospital of Zone 5 of the IMSS in Tula, Hidalgo, severely affected by the floods. In a live broadcast, the doctor Héctor Manuel Arias narrated the affectations, mainly to patients with COVID, reported the Reforma agency.

“What is urgent is oxygen for these patients who still have life expectancy,” he said. “The ones that concern me the most are the COVID patients, they are in that fight for their survival, they demand their oxygen.” The doctor reproached the state government for the delay in sending the supply, despite the fact that he made his call through networks for hours. Filed Under: Virgin Guadalupe Flood Silhouette

Sick were dying from lack of oxygen

“This oxygen is insufficient. A completely bleak outlook, with a natural disaster that we did not expect ”, he said. “What I demand is that oxygen.” Help comes and goes to the facilities in two boats, such as food for the babies and water for the patients. “Sadness because nothing comes, I feel powerless, I did everything possible demanding that help,” said Arias, according to Agencia Reforma.

With a broken voice, the relative of a patient said that the sick were dying, because there is no oxygen. “Please help us with oxygen, there are many patients who need it a lot. If I could get there, let the oxygen not get, “he claimed. Another doctor, named Yahir, expressed his helplessness because they cannot do anything. “Fortunately there are people who are controlled, there are people who are no longer with us, it is not possible that the authorities do not have a plan. We have to wait ”, he lamented. Filed Under: Virgin Guadalupe Flood Silhouette