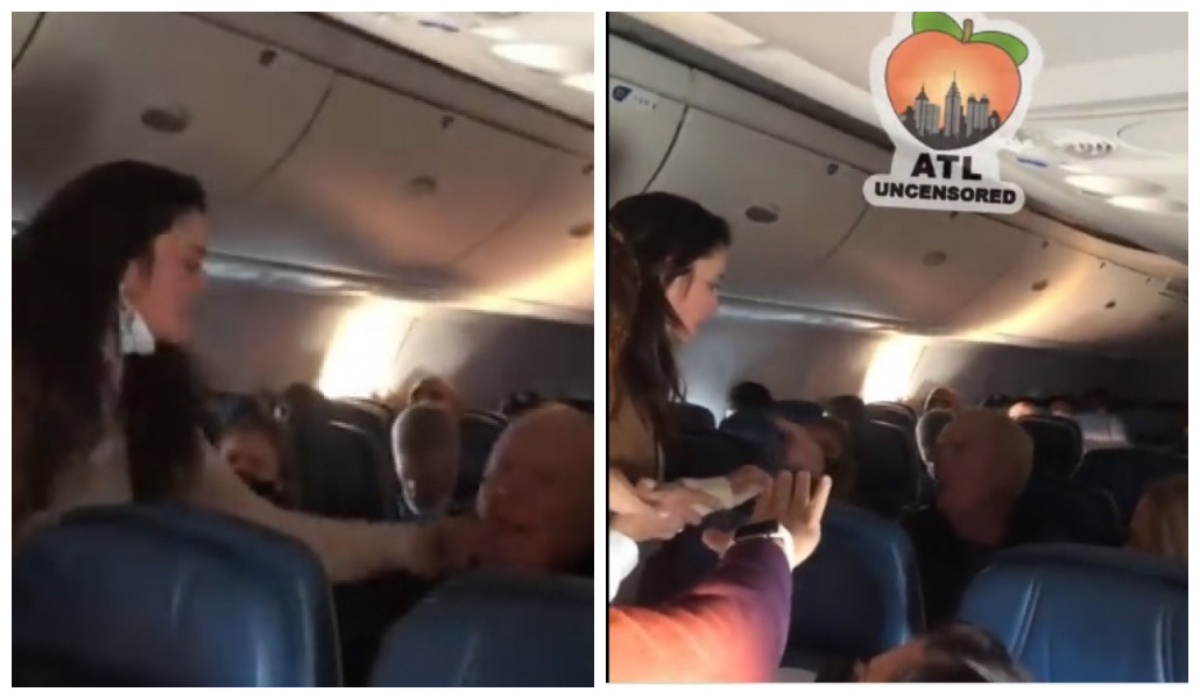 A woman identified as Patricia cornwall was detained by FBI agents, after she starred in a fight in the flight of Delta Air Lines, with an older man, whom he slapped and spat for not wearing the mask.

The events were recorded last Thursday in Delta Flight 2790, which served the route from Tampa to Atlanta, when the woman angrily approached the old man to demand that he put on the mask.

The fight comes as COVID-19 cases are on the rise and the world is fighting the new Omicron variant, which is why hundreds of flights in the United States have also been canceled this Christmas season.

“Put on your damn mask,” the woman yelled.

And just the flight where the events occurred took place before Christmas, where the woman demanded that a passenger put on the mask.

“Put on your damn mask”the woman yelled at the man, when she herself had lowered her mask to her chin.

Situation that was increasing in tone, to the degree that Patricia Cornwall, as the woman was identified, according to what was published by The New York Post, le slapped him while throwing insults at him, to which the man replied without getting up from his seat.

The woman did not calm down at any time and did not stop throwing strong words against the old man who remained in his seat.

The fight was captured on video, which was shared on Twitter on the account by ATL Uncensored.

The video has more than 7.8 million views.

Flight attendants tried to calm down the woman, who kept throwing loud words at the man, who at one point in the discussion called her “Karen”, a pejorative term that refers to a woman who rudely demands things and believes she has the right to demand more than normal.

“Sit down Karen”, said the man in the middle of the fight in the Delta flight.

The woman would not stop screaming and waving at the man who remained seated at all times, a situation that made her desperate. Patricia Cornwall, who spat in the old man’s face.

The man, whose identity was not disclosed, tried to get up, while Cornwall challenged him to do so, the flight attendants tried to defuse the situation.

“You are going to jail ”, the man yelled at her, as she was carried down the aisle by the flight attendants.

“You fucking piece of shit! “Cornwall yelled at him.

The flight attendants asked the man to put on the mask, but he argued that he was eating and drinking, which is why he was not wearing it.

When the plane landed the Atlanta, the woman was detained by FBI agents, she was charged with causing a “disturbance” on the flight that caused “injuries to fellow passengers and Delta employees,” police said.

The arrest was carried out after the police heard the version of the passengers, who stressed that “The woman went crazy in flight” and he began to insult the old man, whom he beat and spat.

“Flight 2790 from Tampa to Atlanta was received by the police after an uncontrollable disturbance of a customer during the flight,” said Delta Air Lines, as published by the Daily Mail site.

“Situations like these are rare for the vast majority of our customers and Delta has zero tolerance for unruly behavior at our airports and on board our planes,” said the US airline.

-Biden faced in 2021 the challenge of COVID-19 and recover the economy, why does it seem that he failed?