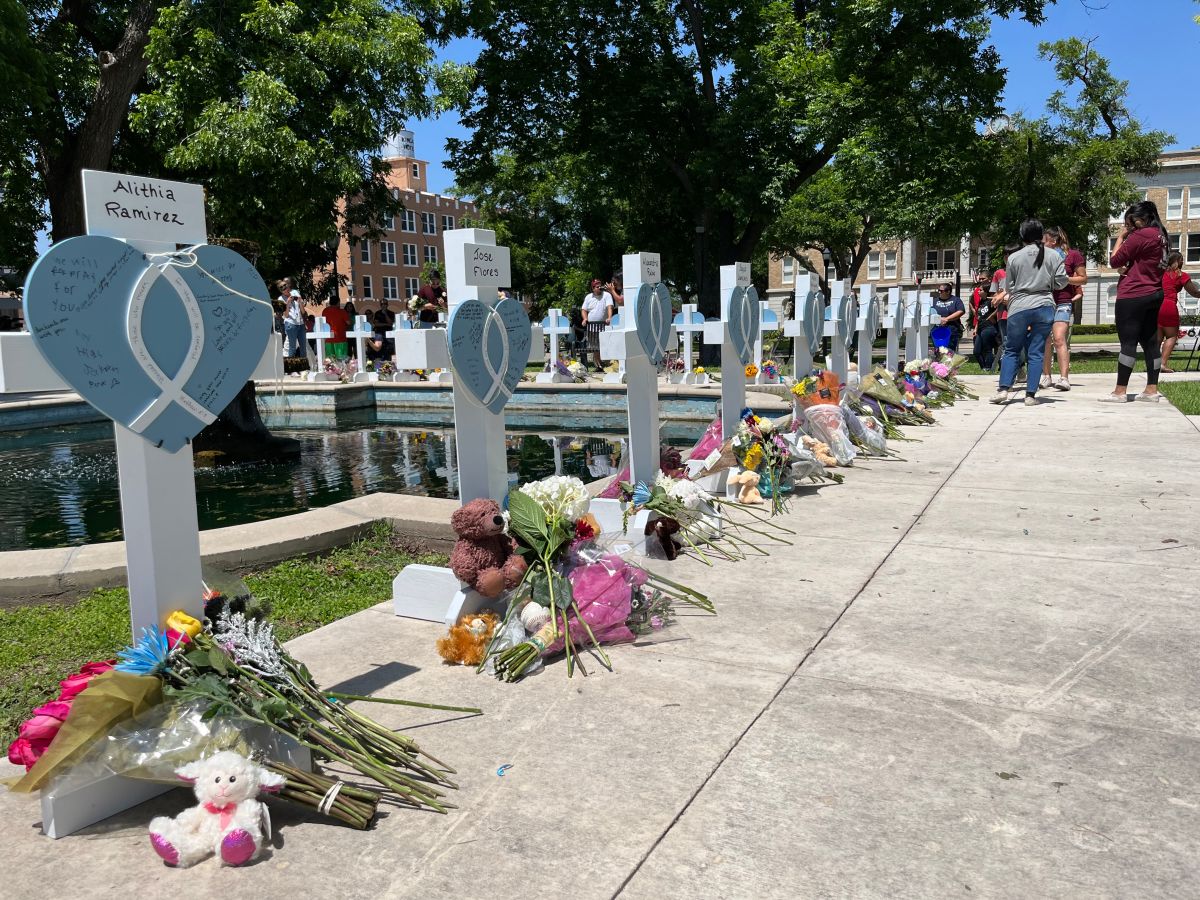 UVALDE – The police response to the shooting in Uvalde, Texas, has outraged relatives of the children who died, like Junior Cazares, whose little cousin Jacklyn was murdered while the police waited more than an hour outside the classroom where the attacker barricaded himself.

“I hope they lose their license,” said Cazares, speaking in front of wooden crosses set up in Uvalde’s central plaza to remember the 19 children and two teachers brutally killed in Tuesday’s shooting at Robb Elementary School.

The revelation, this Friday, that the Police made the decision not to enter the classroom and waited to receive a key to open the door, while a girl desperately called the emergency services surrounded by her dead classmates, It has shocked the town.

“I can’t even imagine those kids locked in that room, knowing there were cops out there. It’s disgusting,” said Cazares, 24.

The young man works in a hospital where some of the 17 wounded in the attack have been admitted, and after learning that the Police had recognized his negligent behavior in the shooting, he went to the central square accompanied by his wife Lisa and their four-year-old daughter. years.

“I only feel anger. It makes me want to quit my job and become a police officer, so I can (…) do things better. They swore to protect our community,” Cazares stressed.

“We know all the children”

Her cousin, Jacklyn, was a relative or friend of several of the girls who died, including Ellie Garcia, who used to play with Junior and Lisa Cazares’ daughter.

“We know each of these (murdered) children, it is a small community and we share our love with each one of them,” said the young man.

His wife, Lisa, was outraged as she recalled how many parents approached the school while the attacker was inside to try to rescue their children and implored the police to act.

“What they were quick to do is arrest the parents who tried to enter,” denounced Lisa Cazares, who believed that if the children of the police officers had been inside, “things would have been different.”

Cazares was apparently referring to the brief arrest of Angeli Rose Gomez, who, after driving 40 miles (64 kilometers) to the school upon learning an attacker was inside, rebuked officers to enter the school and handcuffed her.

Then she convinced the agents to release her, jumped the school fence and entered the school to rescue her two children, who were not in the classroom affected by the shooting and who she managed to get out of the school, Gómez told the newspaper. The Wall Street Journal.

The director of the Texas Department of Public Safety, Steven McCraw, has acknowledged that not breaking down the classroom door was a “wrong decision” and blamed it on the highest police officer who was at the school at the time.

Several media assured this Saturday that that person in charge was Pedro “Pete” Arredondo, the police chief of the Uvalde School District, that it has been several days since he has appeared at the press conferences on the situation.

According to McCraw, after hearing multiple shots in the classroom and considering that the bullets were only directed at the door when the agents tried to access, the aforementioned chief interpreted that there was no one left alive except the aggressor.

So they opted to wait, until finally a Border Patrol team entered the classroom behind a shield and the attacker, Salvador Ramos, emerged from a classroom locker and began shooting at them, at which point he was gunned down, according to details of the investigation leaked to The Washington Post.

Texas Governor Greg Abbott, who initially praised the officers and said they had “ran” towards the attacker, now claims to be “furious” at the negligence of the police officers and has promised a full investigation of their actions. .

In Uvalde, a town with a Hispanic majority, where practically everyone knows someone affected by the shooting, the news has hit people hard, but there are those who still do not dare to condemn the policemen too much.

“I don’t want to criticize them,” said Leti, who lives across the street from the school and recounted how children from various classes “ran” into her garden during the attack and spent a good time there, petting her cat and in many cases crying. Leti doesn’t like people talking badly about her neighbors, about the people who work in her city, but a part of her still doesn’t understand what happened.

“If the parents were willing to go in there, why not (the police)?” he asked.

– Massacre in Texas: the police authorities admit that they “were wrong” by not entering the classroom where the attacker was with the children
– Massacre in Texas: 4 crucial contradictions of the police about the shooting in Uvalde that have called into question the actions of the agents
– Uvalde police were slow to arrest the shooter despite calls from the children