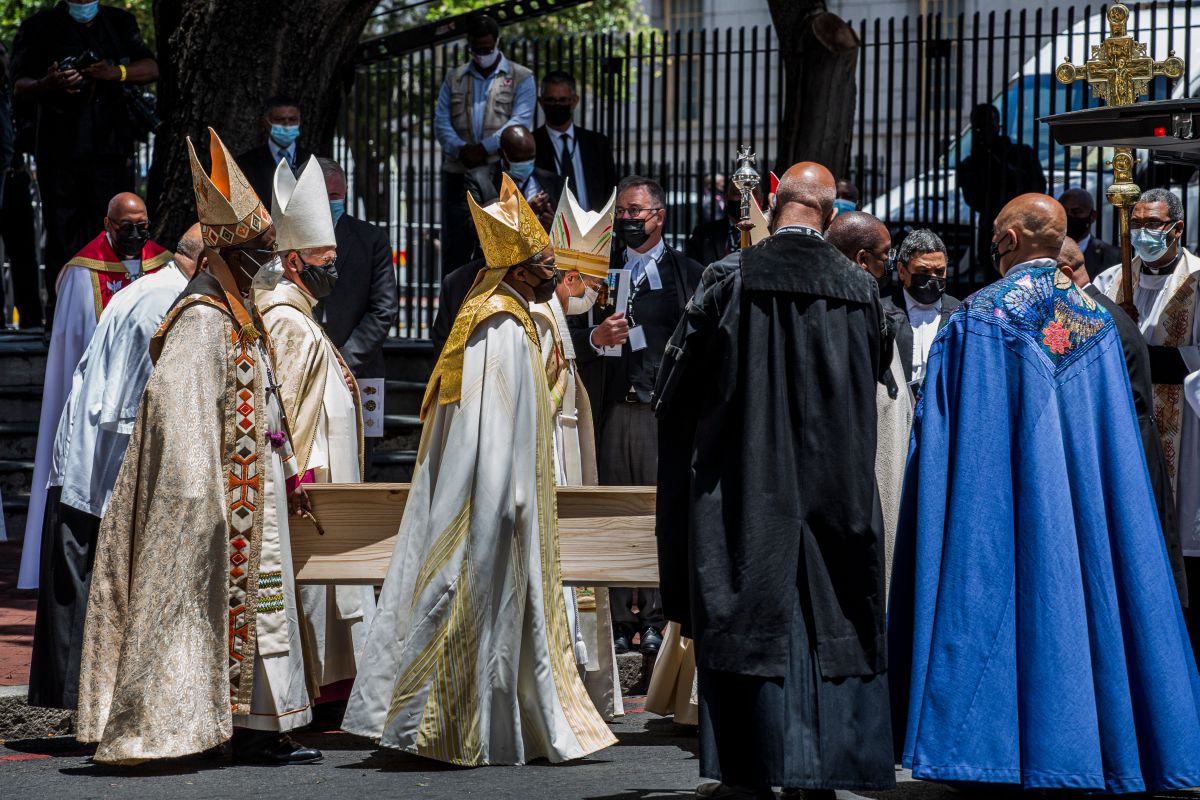 South Africa greeted the new year on Saturday by saying its last heartfelt goodbye in a State funeral for Archbishop Emeritus Desmond Tutu, Nobel Peace Prize and a key figure in the fight against the racist “apartheid” regime.

Tutu “was our moral compass, but it was also our national conscience,” said the South African president, speaking at the ceremony. Cyril Ramaphosa.

The African nation said goodbye to those who always acted as the “voice of the silenced crowd”As noted in his sermon by retired Bishop Michael Nuttall, who worked alongside Tutu during his time as Archbishop of Cape Town, where he was the first black person to be appointed to the position in 1986.

As if the city also mourned the death of Tutu, The rain It was raging this morning in Cape Town (southwest) when, a little after 10:00 local time, the service began in the Anglican Cathedral of St. George, with traffic cut off in most of the streets that surround it.

“If the archbishop were here, he would have said ‘Why do you all look so sad?’. He would have tried to make us laugh, ”Ramaphosa said during his speech – the only one delivered, following Tutu’s own wishes – capturing the general tone of the funeral, which was emotional but also joyous and celebratory for the life of the deceased.

The requiem mass was marked by the restrictions derived from covid-19, that forced to reduce the number of assistants to a hundred.

Among them were prominent figures of the country, such as former Presidents Thabo Mbeki (1999-2008) and Kgalema Motlanthe (2008-2009) or the Minister of Infrastructure and former Mayor of Cape Town Patricia de Lille.

However, the Tibetan spiritual leader, the Dalai Lama, was unable to attend. -whose friendship with Tutu was known- because of the pandemic and problems obtaining an entry visa to the country, the representative who attended on his behalf told local media.

The funeral services featured the participation of different choirs – with performances delivered virtually – whose voices filled the temple as they sang the South African national anthem, a symbol of the “rainbow” unity that Tutu defended all his life.

Naomi Tutu, daughter of the Archbishop and Anglican Reverend herself, and the Primate of the Anglican Church and Archbishop of Canterbury, Justin Welby (in her case, via video) also briefly spoke.

As part of the state funeral, Ramaphosa presented the national flag to the widow of Archbishop Emeritus, Nomalizo Leah Tutu, the only ceremonial element of a military nature that the deceased wanted to include.

Closes like this a week of mourning and tributes in the country, including the installation of a burning chapel in the cathedral on Thursday and Friday through which hundreds of South Africans paraded to say goodbye.

Following Tutu’s wishes, his body will be cremated and his ashes deposited in this cathedral in a private act over the next few days, as confirmed by the current Archbishop of Cape Town and leader of the Anglican Church of South Africa, Thabo Makgoba, who officiated the ceremony.

A life dedicated to human rights

Born in 1931 in Klerksdorp, a small town southwest of Johannesburg, Tutu He was awarded the Nobel Peace Prize in 1984 for his tireless fight against the racial oppression of “apartheid”.

Tutu’s trajectory was marked by a constant defense of human rights, something that led him to distance himself on numerous occasions from the ecclesiastical hierarchy to openly defend positions such as the rights of homosexuals or euthanasia.

In the last stage of his life too often spoke out against corruption against the new powers of South African democracy and against global problems such as climate change.

“Even after the advent of democracy, he did not hesitate to draw attention, often harshly, to our shortcomings as leaders of the democratic state,” Ramaphosa said on Saturday.

In recent years, Tutu had stayed away from public life due to his advanced age and health problems that he had suffered for years, including prostate cancer.

Archbishop emeritus passed away on December 26 in Cape Town at the age of 90. “The most appropriate tribute we can pay him is to defend the cause of social justice for which he fought tirelessly throughout his life,” said the South African president at the conclusion of the funeral.

Read also:
– The Bidens mourn the death of Tutu: “a servant of God and of the people”
– The president of Mexico regrets the death of Desmond Tutu and highlights his struggle
– Robert Mugabe: controversial former Zimbabwean president dies at 95