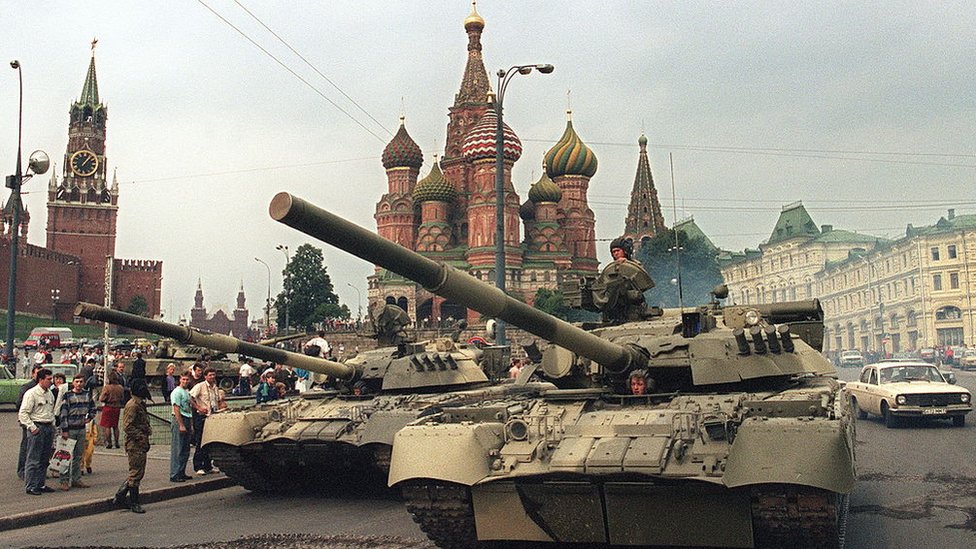 It was for decades the only power that could rival the United States, until the night of December 25, 1991, it ceased to exist.

“By this means I interrupt my activities as president of the Union of Soviet Socialist Republics,” announced Mikhail Gorbachev from the Kremlin, in a speech that went around the world.

For many, that moment marked the end of communist power and the Cold War, but for others the Soviet Union (USSR) had already died weeks before with the Belavezha Treaty.

However, the vast majority agree that after the coup in August of that year the Union had its days numbered.

Since the spring, Gorbachev and his allies in the federal government had been negotiating the New Union Treaty, which sought to keep most republics within a much more flexible federation. They considered that it was the only way to save the USSR.

“They wanted to maintain some kind of Union, but over time that idea became less and less attractive for the leaders of the republics, especially for Boris Yeltsin (president of Russia),” journalist and writer Conor O’Clery tells BBC Mundo , author of “Moscow, December 25, 1991: The Last Day of the Soviet Union.”

The proposal was also rejected by the conservative communists, the army and the KGB (the Soviet intelligence agency) and so Gorbachev was placed under house arrest at his vacation home in Crimea.

But the coup plotters were poorly organized and failed after a civil resistance campaign led in Moscow by Boris Yeltsin, who was both an ally and a critic of Gorbachev.

The coup failed, but as a result of this Gorbachev lost his influence, while Yeltsin emerged as the preferred leader of the Russians.

Gorbachev had planned the signing of the New Union Treaty for August 20. But the army and the KGB considered that this pact would have destroyed the USSR as a state, and I agree ”, Vladislav Zubok, a history professor at the London School of Economics and an expert on the Soviet Union, tells BBC Mundo.

“The government coup It was a surprise, because it happened when everyone was on vacation. People expected something like this to happen, but not in August ”, recalls the also author of the book“ A failed empire: the Soviet Union in the Cold War from Stalin to Gorbachev ”.

Zubok, who was born and lived in Moscow during the Soviet era, points out that people often believe the narrative that December 25 was a very important date, but in his opinion it was not.

“When Gorbachev announced his resignation, he no longer had any kind of power. What happened was a televised show, “he says.

The coup leaders prevented the signing of the New Union Treaty in August, but could not prevent the imminent dissolution of the Soviet Union, which had been cooking for years. In fact, they gave it a boost.

After the coup, many understood that the Soviet Union had come to an end, but others, including Gorbachev, believed that it could still be saved under another type of union of sovereign states.

“The idea of ​​the Union continued to appeal to millions of people who were used to living in a large country. They hoped to preserve it under perhaps another name or regime, ”says Zubok.

But Yeltsin had another plan.

On December 8, 1991, the Russian president met with three other leaders of the 15 Soviet republics, Ukrainian President Leonid M. Kravchuk and Belarusian leader Stanislav Shushkevich, and together they issued a statement known as the Treaty of Belavezha.

This pact stipulated that the Soviet Union would be dissolved and replaced by the Commonwealth of Independent States (CIS), a confederation of former Soviet states.

For journalist Conor O’Clery, this event marked the end of the Soviet Union: “There was no turning back.”

“Gorvachev could not accept it, and for two or three weeks he continued to insist that they had to maintain some form of union of which he would be president ”, he adds.

But on December 21, 8 of the 12 remaining Soviet republics joined the CIS with the signing of the Almá-Atá Protocol, thus dealing the final blow to the dying Union.

O’Clery says that’s when Gorvachev finally realized an era was over and decided he would resign on December 25 with a speech.

“Yeltsin allowed him to stay in the Kremlin for a few more days and agreed that the withdrawal of the red flag of the Kremlin it would be done on December 31 ”, says O’Clery.

Historian Vladislav Zubok points out that the Almá-Atá Protocol was signed in an “extra-constitutional” way.

“They had no constitutional power to dissolve the Soviet Union, but they got away with it. They were not arrested or anything, “he insists.

“The truth is that by then it was clear that the central government was completely dysfunctional and the army had already stripped its loyalty to Gorbachev to give it to Yeltsin.”

The last day of the Union

The days passed without much news until the day came when the resignation of the perestroika man was expected.

On December 25, most of the Kremlin halls were calm, except for a couple, as Yeltsin already controlled the presidential complex.

He had appointed his own command of the Kremlin Regiment, a special unit that ensures security in the compound, so that all guards at the entrances and surroundings you they were loyal.

Gorbachev barely controlled his office and a few rooms around it, which were used by teams from CNN and ABC, which were preparing to broadcast the resignation.

O’Clery relates that, shortly before the speech, Gorbachev had a telephone conversation with British Prime Minister John Major that left him upset, so he later retired to rest alone in a Kremlin room.

“He was very emotional and had had a couple of drinks when his assistant, Alexander Yakovlev, found him crying in the room ”, he says.

“It was Gorbachev’s saddest moment, a moment of anguish. But he recovered quickly from that episode and prepared to give a speech with great dignity. “

As planned, the last leader of the Soviet Union began at 7pm local time an intervention that would last 10 minutes, and in which he resigned from a country that no longer existed.

“Now we live in a new world,” said Gorbachev justifying his decision.

A little-followed “show” in Russia

Zubok insists that it was a “televised show.” CNN translated and broadcast the speech around the world via satellite.

According to experts, Gorbachev’s words had more resonance abroad (where he still enjoyed high popularity) than at home.

“On Soviet television the speech was seen very little. Gorbachev was already extremely unpopular in the Union, and hardly anyone interested him. Everyone already knew that the soviet union had died“, Assures Zubok.

The historian agrees that it was a “dignified” intervention, but points out that it caused discontent even within their ranks.

“He defended his mandate, he never acknowledged any mistakes. Even some people around him were surprised. They were hoping it would say something about why perestroika went so bad, why there was nothing in the stores, or why the economy was taking a nosedive. But no, “he continues.

“He continued to view perestroika as always, as a global mission. And he ended his presidency in high spirits. He did not want to show weakness to Yeltsin and that is why Yeltsin was extremely upset after that speech and refused to meet with Gorbachev. “

O’Clery says Gorbachev could have shown more generosity and appreciation to Yeltsin in his speech.

“Yeltsin saved him after the coup. If it hadn’t been for him, Gorbachev would have ended up in jail or worse, ”he says.

O’Clery notes that Yeltsin was so angry that Gorbachev did not mention him in his speech that he ordered the red flag to be removed immediately, even though he had planned to lower it at the end of the year.

Yeltsin also drew up a decree that night, ordering that all lGorbachev’s and his wife’s personal possessions were to be taken away of the presidential compound, even though he had previously said they could stay for a couple more days.

“Gorbachev came home to find his wife standing in the middle of books and photos that the Yeltsin people had thrown on the ground,” O’Clery recounted.

Yeltsin and Gorbachev did not see each other again after that speech.

Gorbachev’s low popularity in Russia was in evidence when Moscow’s Red Square was almost deserted the moment the red flag was withdrawn from the Kremlin.

At 7:32 pm on that historic night, the Soviet flag was replaced by that of the Russian Federation, under the command of what happened to be its first president, Boris Yeltsin.

And at that very moment, what had been for decades the largest communist state in history was officially divided into 15 independent republics: Armenia, Azerbaijan, Belarus, Estonia, Georgia, Kazakhstan, Kyrgyzstan, Latvia, Lithuania, Moldova, Russia, Tajikistan, Turkmenistan, Ukraine and Uzbekistan.

At the same time, on the other side of the world, the United States finished consolidating itself as the only global superpower.