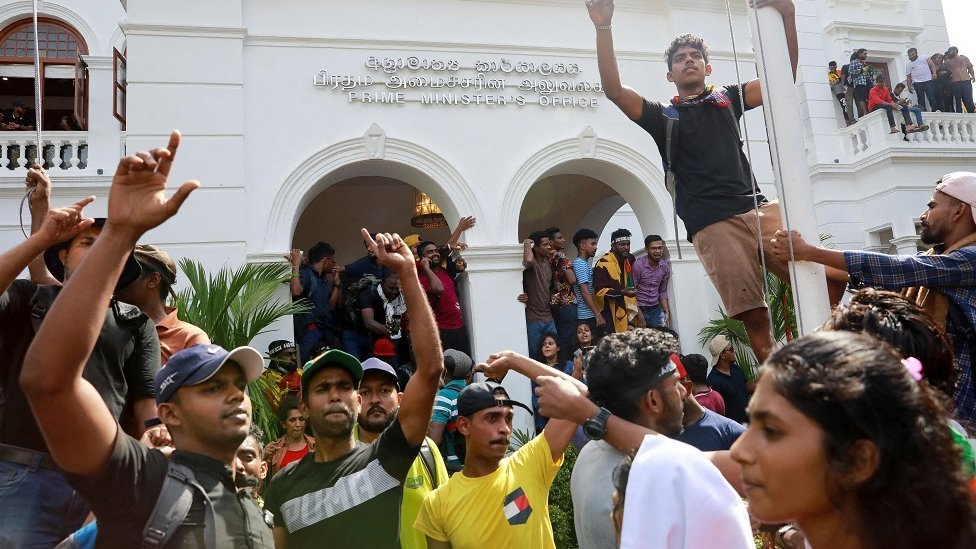 Sri Lankan Prime Minister Ranil Wickremesinghe gave a televised speech on Wednesday in which he reported that he had ordered the military to do “whatever is necessary to restore order.”

The announcement came shortly after a group of protesters stormed his office, following news that the country’s president, Gotabaya Rajapaksa, fled via military plane bound for the Maldives, a group of islands in the Indian Ocean.

Sri Lanka, south of India, made headlines this weekend after a group of protesters stormed the presidential residence and set the prime minister’s house on fire to demand a change of government.

Images broadcast globally showed some of the protesters swimming in the presidential pool.

Sri Lanka is currently experiencing a severe financial crisis and does not have access to foreign currencies like the dollar or the euro to pay for their imports.

These include food, medicine and fuel.

Less than a week ago, the Sri Lankan government announced that it did not have enough foreign currency reserves to import fuel and that gasoline and diesel reserves would barely last a few days if normal consumption levels were maintained.

Nixon Chandranathan, one of the protesters who stormed the prime minister’s office, told the BBC that “they are still fighting,” despite calls for cooperation from the prime minister, who has been left in command of the country after the flight of President Gotabaya. Rajapaksa.

“Our goal is for Gota to leave. And Ranil and other cabinet members have to go. Now nwe need truthful and honest leaders to rebuild Sri Lanka,” he added.

Protesters who entered the prime minister’s residence lounged on palace sofas and took photos of the many portraits that adorned the walls, many of Queen Elizabeth II and Prince Charles.

Meanwhile, outside the building, a group of soldiers were standing, watching the protesters celebratingas reported by BBC journalist Tessa Wong.

The flight of President Rajapaksa puts Sri Lanka at risk of slipping into a power vacuum, at a time when it needs a functioning government to try to get out of its dire financial situation.

For BBC journalist Anbarasan Ethirajan, reporting from Colombo, his flight represents a victory for the protesters who took to the streets to express their anger against the mismanagement of the economy and the rising cost of living.