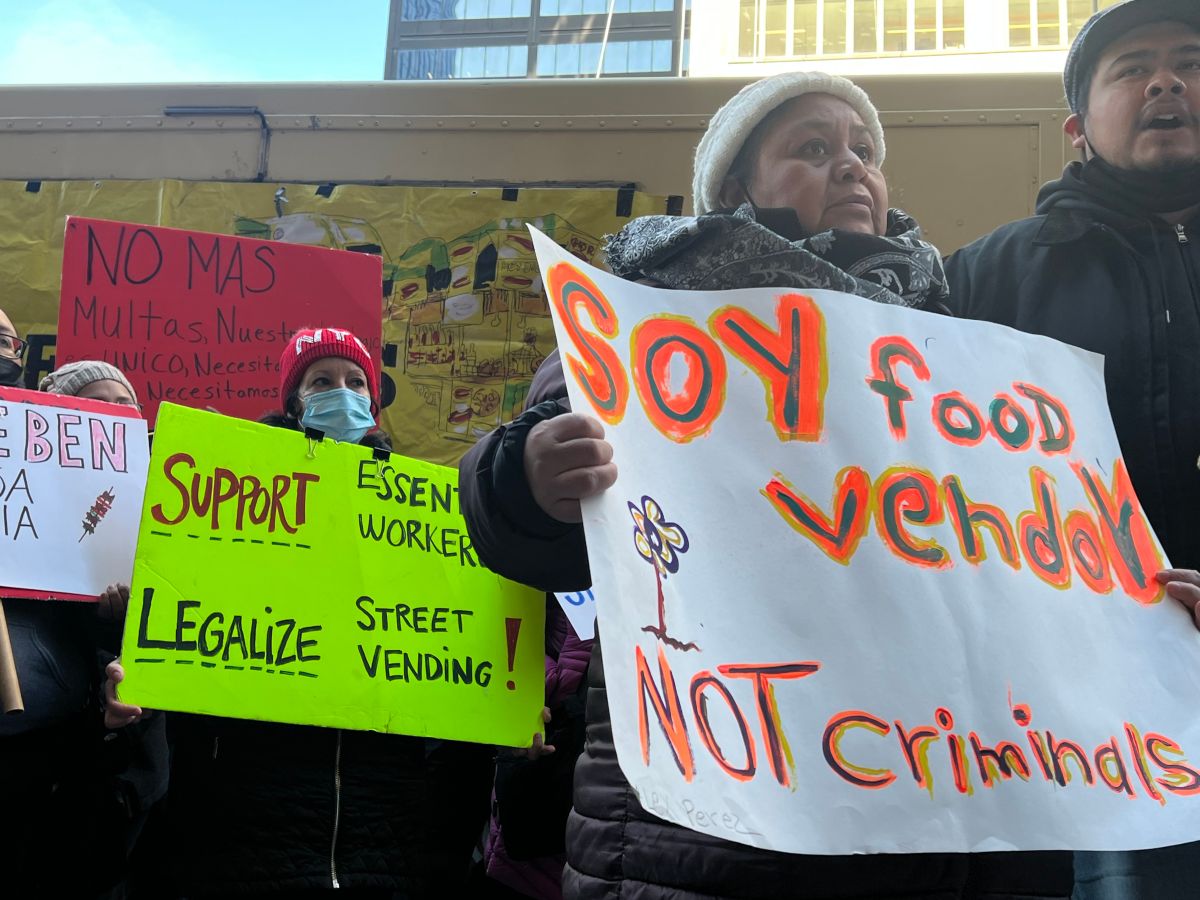 No matter low temperaturesnor the discomfort that sleeping outdoors means, dozens of itinerant workers got up early this Monday to plant themselves on the sidewalk in front of the governor’s office Kathy Hochul, in Manhattan, and spend the day there and sleep the whole night there. The reason? require the state president that within the current state budget discussionwhich should be ready on April 1, promote the immediate approval of a law that would put an end to the problems and persecution they suffer thousands of street vendors who make a living selling food and items on the streets without a license.

The workers, mostly immigrants and women of Latino origin and from other countries such as Egypt and Bangladesh, recalled that because New York City stopped issuing licenses and permits of food sales more than 40 years ago, the vast majority of 20,000 street vendors who are estimated to make a living selling tacos, tamales, other types of food and retail items on the streets of the Big Apple, have to do so without the respective authorization.

This makes them, as they denounced, not only a target of harassment by the Police that in the last semester of last year imposed 742 fines, but also from the Department of Consumer Affairs that has fined this 2022 more than 171 workers, with penalties that reach $1,000 for each violationwhich, they confess, makes them feel that they are treated as if they were criminals.

That’s how he stated it Ciria Santiagowho made an urgent call to the State Legislature and Governor Hochul to give the green light to an initiative by Senator Jessica Ramos, which seeks to grant licenses to itinerant workers and prevent the Police from fining them. The Mexican, who was ready to sleep in front of the New York Governor’s office, assured that it is time to fix a problem that affects thousands of families who must run every day so that their products are not taken away or they are fined.

“Many times I have to go out late to work to ensure that the police are not going to bother me, because I already know their schedule, and if they are out there, then we risk being fined and taking everything away from us,” he assured. the mother from Veracruz, who makes a living selling in Jackson Heights.

“We are working people, we are not criminals. And all we’re asking is that you treat us with respect and dignity. It is not that we want to work without a license, it is that there are no licenses, so fix that now”he added.

Maria Lopez, who a few years ago was arrested by the Police for selling water and fruit in the Bronx, also joined the day of protest and asked the State to show good faith towards the work that they thank the street vendors.

“We want you to legalize our work, that the Governor authorizes us more licenses and permits. We do not want to be a burden, on the contrary, we are willing to pay what we have to pay for the licenses so that we are no longer afraid or running so that they do not take away our things and do not fine us,” said the immigrant mother. “We don’t want to run anymore. We want decent treatment.”

Mohammed Attia, organization director ‘The Street Vendor Project’, He stressed that the call to the Governor is not to lose this opportunity that she has in the current budget to formalize and decriminalize street vending throughout the state of New York.

“This would help get moms who sell tamales, tacos, Halal cart vendors and entrepreneurs who are part of New York’s network and who are its heart and soul to formalize in the industry and also help our economy as a whole prosper. by encouraging small business owners and increasing revenue for both the City and the State,” said the activist.

Emily Goldsteindirector of organization and defense of the Association for Neighborhood and Housing Developmentcriticized that fines continue to be imposed on street vendors who are only earning an honest living.

“Street vendors are among the small businesses that help form the backbone of our city’s economy and the cultural life of our neighborhoods. It is time to stop penalizing and start supporting these hardworking members of our communities,” Goldstein said.

Ahmed Mohammed, legal director of the Council on American-Islamic Relations-NY, asked the state president to move from words to deeds, and support with the approval of the law that would improve the situation of street vendors, his phrases of appreciation to the working community and immigrant.

“We are a city that claims to value and welcome immigrants, and street vendors treat them oppressively and cruelly. This must stop now and the Governor must take action so that justice is done to them,” said the activist.

The Assemblywoman Marcela Mitaynesone of the defenders of the bill in favor of the decriminalization of itinerant work and the greater granting of licenses, assured that it is time to put an end to the abuses of itinerant workers, many of whom are single mothers, heads of households.

“New York must end the unregulated vending system that currently criminalizes and imposes heavy fines on our working-class immigrant vendors. We can accomplish this by removing the insurmountable barrier to entry to the itinerant industry this year so that vendors can obtain permits and licenses to operate their business as part of our state’s formalized economy,” the policy said. “We must include (initiative) A5081 in our State’s fiscal budget this year.”

What the bill establishes

The bill, which in the Assembly is promoted by the Queens Assemblywoman Jessica Gonzalez-Rojasseeks to formalize the street vending industry, eliminate the use of the New York police in interaction with street vendors, and end criminal sanctions for street vending crimes, for which it proposes that supervision be done only by a civic agency.

It also seeks to vacate prior criminal convictions for street vending to ensure there are no federal immigration consequences.

Street vendors are part of the business backbone of our local economies, and we cannot speak in good faith about a just recovery for our state without prioritizing S1175 and legalizing street vending by 2022. Senator Jessica Ramosproponent of the law in the Upper House in Albany.

Under phrases like “more tacos, fewer fines”, “more licenses, more tamales” and “Hochul, listen, we continue in the fight”, The protesters spent the day and will continue tonight in the hope that the Governor listens to them, and that the Big Apple does not depend only of the 400 licenses that each year.

Following the protest, the office of the Governor Hochul He did not refer specifically to the bill that the protesters demand to be approved, but they assured that the president continues to seek measures that benefit all New Yorkers.

“Governor Hochul’s executive budget includes bold initiatives to seize this once-in-a-generation opportunity to invest in our future, and we look forward to continuing to work with the legislature to finalize a budget that serves all New Yorkers,” Jim Urso stated, spokesman for the Governor of New York.

NY Street Vendors by the Numbers