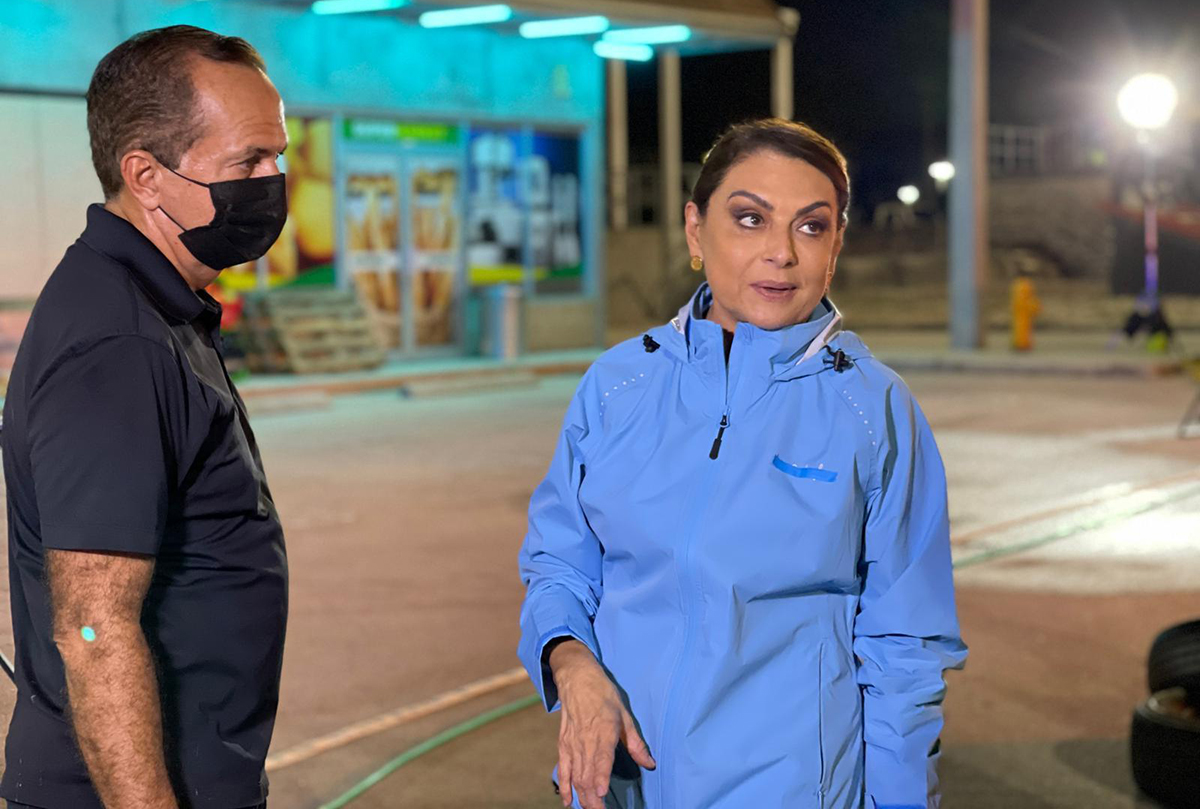 This Sunday, October 10, we will see María Antonieta Collins twice on the Univision screen. In the morning driving ‘Despierta América on Sunday’ from 8/7 PM Central to 10/9 Pm Center with Jackie Guerrido, Raúl González and Carolina del Rosario and at night, surprise!

Yes, the beloved journalist that everyone calls MAC affectionately, joins ‘Nuestra Belleza Latina’ this Sunday night as the coach in charge of preparing the 10 contestants for the extreme test, which one? Five will report a fire in the middle of the simulation and the other five a hurricane.

In the best style of María Antonieta Collins, who is undoubtedly the best reporter in the field of action that we have in the Latin market in the United States, she wanted to test herself how the experience was lived in the style of a movie, to find out what the candidates would go through.

Before you can see it on the show this Sunday at 9/8 PM Central, special schedule for a soccer game, we spoke with MAC, who gave us details of the experience and gave us the information that we need to have to be aware.

-What did you find in these candidates where the next Univision talent will be?

Marie Antoinette Collins: I had already done another coaching with the girls in that edition in 2009. I love ‘Nuestra Belleza Latina‘… I am surprised because they have done their good homework, or they have seen the videos very well and they know the evidence, especially the journalistic ones, that that is what happened to me, and apart there is talent, and the girls are already much more preparedThey are better prepared than 10 years ago for telling you something, they will see it on Sunday, now it was my turn for coaching, wait and see what the judges are going to say.

Marie Antoinette Collins: No, neither of the two things, what happens is that if I have entered the Chapo tunnel, for example, because It is very easy to say: “There, in the background or around here”, and it is different if you do things and say: “This is where El Chapo was, this way he left”… I’ve always been that kind of thing, more real, more organic, as they call it now … I’m seeing that industrial fan, and I had to see what the girls were going to feel more or less, and in truth that fan blows air!

-Having covered so many stories, where did it take you back?

Marie Antoinette Collins: Suddenly I start to see that I have traveled a path … I have covered hurricanes, and here they were to cover a hurricane and a fire. That, as a reporter on the street, is like our daily bread, on all sides. However, you realize that it is already another stage of your life, where they tell you, “Now you can come to do coaching” … And I like that. There were two warnings for the girls to pay attention: one is that I sent on Monday morning a video to the mansion to tell her, I want them with common sense and I want them with their equipment at night and armed, punctual, in the place where they are going to take them.

The second was that before, of course, all this started which was tremendous production with special effects and everything spectacular, heis I gave a tutorial of the things that I knew could happen to them, to see if they did or to see if they did. That’s what people are going to see on ‘Nuestra Belleza Latina’ on Sunday night, they did it or they didn’t. And while, I had to see them and realize that in principle, some ignored my instructions and the important thing was, that the judges are going to qualify this because it is the extreme test, then they will qualify and we will see what will happen.

-You just gave an example of your coverage in the El Chapo Guzmán tunnel where he escaped from jail… If you had had to choose evidence, what would you have chosen?

Marie Antoinette Collis: That same one, because imagine that the Moloya tunnel you had to go down from the floor to the bottom is the height of a 3-story building, when I go down I realize that it was not a staircase, it was two wooden sections with some crossbars passed , and I thought: “My God, how many years have passed, one did not loosen up?”… Down there was a void, so that’s what I was thinking when suddenly the soldier who let people in told me, “Ma’am, come down or go up, but you can’t stay” … Suddenly I also realized that if I turned up, the sand with which the floor was covered fell into my eyes, and if you turned down it gave you vertigo because that was a hole, there is nothing … I think those are tests in which you say, this is what to do, period, and for that you are trained, because at the end of the day, this is a profession of soldiersThere are no men or women, there are soldiers and you do it and that’s it.

-Since you did the coaching prior to this, what do you applaud most about the evolution of reality?

Marie Antoinette Collins: Me I applaud that here there are no longer sizes, there is no 90-60-90 in Hispanic countriesHere there are simply women, they all have something, something very special, they are pretty, they know they are pretty. I think there are so many less complexes that plagued previous generations like mine, 3, 4 or 5 generations of these girls, I admire that a lot, there are no sizes, there are no beauties described as such, everyone is beautiful and intelligent, and everyone is there to show that they can do it well, whatever it is, and I think that basically that is to applaud in a beauty contest or reality show.

-If you were starting your career today, would you dare to enter an ‘Nuestra Belleza Latina’?

Marie Antoinette Collins: I think not because my personality, curiously, is blessed to know the benefit of a mirror … I have never believed myself to be pretty and for that you have to feel pretty. I always said that I was: “skinny, ugly and poor”, and that was a very bad combination, so you had to study a lot and read a lot… Maybe rethinking the question, the test is on Sunday, has a moral, whoever is going to be ‘Nuestra Belleza Latina’ 2,021 is going to be one of the faces of Univision, and maybe it will end in the newsroom or in sports, maybe at that point of them, this is the best springboard, in my case, I was not so sure.

-If it happened to you that the winner was your partner or your disciple or worked with you, what coaching would you do?

Marie Antoinette Collins: The same one that I told her, that they forget everything that is around and that they concentrate on what they are doing, and also that the more they know about one thing, that is going to be the best they can have. I believe that it is so basic but also so important, and it is so easily forgotten what this blessed profession of being a reporter is, that for the sake of technology, what they need to remember is that those of us who started in this business, we started out knowing perfectly what a day, second by second of a story, and it is the only way that you understand many things.

Maybe it’s back to basics, we didn’t have Google, we had encyclopedias; we did not have digital maps on our phones, we had the atlas of each city to know where we were; We did not have computers, so we had a lot of quarter to be able to call the office, and we had to witness when faxes were born, and all that seemed to us a situation taken from a fiction novel, and we began to live it … Maybe that worked in our favor, and that works against many other young people. It is a matter of adapting, and yes, not forgetting that all past time is also very good.

LOOK HERE A PREVIEW OF THE PUERBA:

DO NOT FORGET TO SEE THESE OTHER STORIES:

• Our Latin Beauty: Everything that happened at the second gala

• ‘Nuestra Belleza Latina’: On its return it swept the rating

• Alejandra Espinoza: “All the things that I have achieved in my life, it has been because I have done a lot”