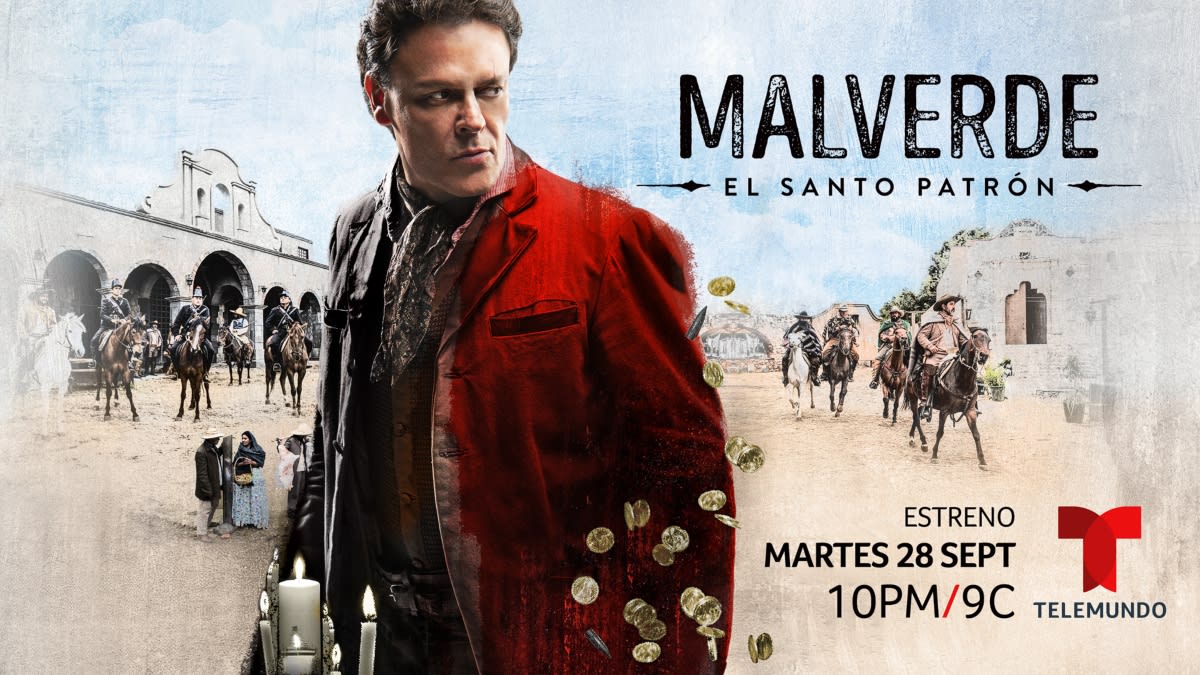 Pedro Fernández Malverde Patron Saint. On May 3, Jesús Malverde is commemorated, the legendary Mexican character who will soon arrive on the screen of Telemundo in the first Super Series of the time Malverde: The Patron Saint, starring Pedro Fernandez alongside a renowned international cast that includes talented Mexican actress Carolina Miranda and renowned Mexican actor Mark Tacher; It also has the stellar performance of the Venezuelan actor Alejandro Nones; Mexican actor Luis Felipe Tovar

Inspired by a true story, Malverde: El Santo Patron is an incredible original production that tells the truth behind the Mexican legend. The series, which will begin production this month in Mexico, will be full of action and will be produced with a very current language, to tell the story of a boy born in 1870 in Sinaloa, who will become a legendary, almost religious figure, defender of the people, protector of both innocent as well as poor and dispossessed, and at the same time as drug traffickers and thugs.

Jesús Juárez, was born in Sinaloa in Mexico. He is known as “Malverde”, the “green” evil, for being a bandit with a cause. He had a complex childhood, since he was an orphan from a young age and grew up alongside his Yoremes brothers under the influence of the community’s shamans.

Over the years, Malverde shares with the Aguilar who are like his family, Nazario and Isabel, with whom he lives in love. However, Malverde is a bandit who lives by conquering various women, everywhere while fighting for justice in his town favoring those most in need. Now the protagonist of the series, Pedro Fernández speaks exclusively for Hispanic World about this new challenge.

Pedro Fernández Malverde Patron Saint: How was the invitation, did you feel any fear?

“I am very happy, very excited for this premiere of Malverde: The patron saint, which is an impressive and beautiful project. It is a beautiful story, he is a magical, wonderful, generous, loving, vigilante, and defender character. I am very happy, the truth is very happy, because it has been a job for many months of great demand in all aspects, physically, mentally, acting, it has been very entertaining and undoubtedly represents a very important challenge in my career ”.

“I was like many people locked up in my house because of the COVID issue, that we did not go anywhere, you know that the recommendations were not to go out. Literally I from March of last year did not leave my house until then. In January I received a call, which invited me to be the protagonist of this beautiful to give life to an enigmatic character ”.

“A character who is talked about so much, but at the same time little is said, because those who are known are urban legends, they are not legends or the real story that is said in the street. If it has some things to do, but not at all. When they invited me and told me what it was about, I said, “What about Malverde’s documentation? There is nothing, the only thing we know is what is said on the street.”

“I started looking and the first thing I said was ‘thank you for thinking of me for the project’, I had to think about it and say I have to see what kind of character to know or at least give me an idea of ​​whether I am capable of bringing life to such an important and legendary character ”.

“I love that the project is directed to the life of Jesús Malverde, which is an unpublished story, it attracts my attention that it is not known at all. They gave me a presentation with which I did not have the opportunity to say no, because regardless of being an extraordinary story, I was also facing an impressive production set in 1910 with everything it represents. “

“Everything that was happening in Mexico in 1910, around this story. And then I said, I like it, I love it, let’s see what happens, let’s move forward on the important points of this whole project. The immediate point was when they want to start and they tell me tomorrow ”.

“I did not show up the next day, but I showed up a week later to start a project in which, well, the first thing I came across was the demand to give life to a character, a look, an expression, a way of walking , a way of acting, a way of expressing their concerns, their values, their virtues, their defects “

“The truth is that I am very grateful, for the invitation, also with the management, grateful with Marcos Santana, with Karen, with María, who in this part of Telemundo, was a fundamental part, with my work team, we all turned our heads in the project in an extraordinary way, we are just days away from this long-awaited premiere. With much desire that the public know it ”.

Pedro Fernández Malverde Patron Saint: How did you experience a Malverde statuette?

“It was a magical experience, because I had never visited Malverde’s chapel and I did it first of all with the intention of getting to know him and documenting a little more information. But also with the main objective of thanking him for being on my way, for doing Malverde’s project ”.

Experience in the chapel of Malverde

“After all this happened in the chapel, I ran into some women who gave me these Malverde tastes and told me many things that they knew. They are elderly ladies, they have very up-to-date information on everything that has happened over the years in the chapel, the area, the people, the miracles that have been experienced “

“It is very important to say that Malverde is not a saint canonized by the Catholic Church. He is a saint because his origin Yoreme, he learns to heal through herbs. So when he carried out the activity of this, the sick because it was a miracle, they did not know what was happening, they did not know how he was able to heal them. The composition of the patron saint is a consequence of that struggle to defend his people ”. Filed Under: Pedro Fernández Malverde Patron Saint

Did nothing happen to you during the recordings?

“The Isabella thing was an unusual event, but in the end it is something that those of us who were on horseback faced every day. We all had minor incidents, maybe hers was a little more important, but the demand is very nice, but it is very heavy. It requires strength from you, it requires you physically to be well, to be full “

“The physical work of Malverde’s own performance was what made me feel better physically, because I didn’t have time to do it before. Not having had the project for a long time before, did not give me time to prepare myself for that. I started to work in a different way, that’s what made me see myself better ”. Filed Under: Pedro Fernández Malverde Patron Saint

Fernando Colunga was first and in the end Malverde chose you

“I would like to believe that it was like that, it is not certain that it was like that, but I would like to believe because I understand that things are for someone. There are projects that are presented to us and there are things that we want to do that are not given to us for some reason. Honestly, I did not know that Fernando is a colleague that I admire a lot and I did not know that the character was from the beginning “

“I didn’t ask when they invited me either, it didn’t seem like the most important thing to me, for me the most important thing was that they were calling me and that’s what I keep. Maybe Malverde said ‘I want Pedro to do it,’ he came to me and I opened my arms and said, I’ll do it. I am happy and happy, with a wish that the public can get to know this project ”. Filed Under: Pedro Fernández Malverde Patron Saint

Weren’t you afraid of doing a Narcos project?

“Not because I did it with great respect to all the faithful, wherever they come from and whatever they do because in the end this is the part of human beings to believe, to adore and to be faithful to what we believe, to what we already think about what we need. And I don’t want to get involved in that, my interest was to do it with a lot of respect for Malverde, his faithful and that’s what I did ”.

“It worried me a lot, now not because we already have it and we already did it, but I was very worried about not doing a job worthy of the greatness of what Malverde represents for all the people who adore him. They are going to know how his story really was and that seems wonderful to me ”. Filed Under: Pedro Fernández Malverde Patron Saint