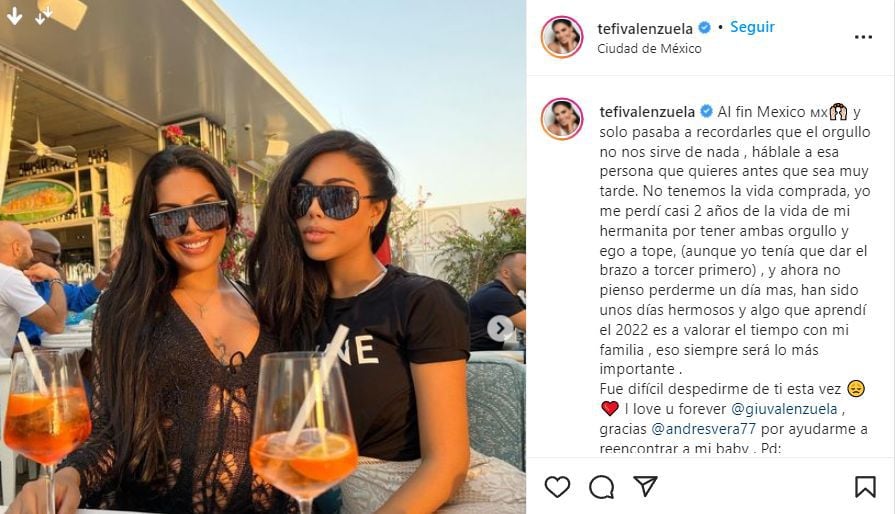 Through her Instagram account, the model Stephanie Valenzuela, internationally known as Tefi Valenzuelashared the news that he managed to make friends with sister Giuliana, after two years of being confronted by the media.

More information: Eleazar Gómez’s mother justifies violence against Tefi Valenzuela: “If he hit her, it would be for something”

The model indicated that she was reunited with her sister Giuliana after two years, after having put aside the ego and pride that overwhelmed them and kept them apart.

Tefi Valenzuela shared photos with her sister Giuliana and he dedicated a message to him in which he expresses all his love and reflects on the estrangement they had.

“Finally Mexico and I just happened to remind you that pride is useless to us, talk to that person you love before it’s too late. We don’t have life bought, I lost almost 2 years of my little sister’s life for having both pride and ego to the fullest, (although I had to give up first), and now I don’t plan to miss another day, they have It has been a beautiful few days and something I learned in 2022 is to value time with my family, that will always be the most important thing. It was difficult to say goodbye to you this time 😞❤️ I love u forever”, Indian Tefi Valenzuela.

DOES NOT INTEND TO RETURN TO PERU

A few weeks ago, Stephanie Valenzuela assured that she has several job proposals in Peru; however, for now her future is in Mexico. For now, she has everything ready to shoot an international movie.

“I have the doors open for several productions, but at the moment I have no intention of working in Peru because today I am focused on staying in Mexico. For now, thanks be to God, opportunities as an actress are opening up for me, I am about to record a feature film, as well as several surprises that will make me grow personally and professionally”he clarified.

On the other hand, Valenzuela also remains valid in the musical field. The also singer has recorded with La Sonora Dinamita, a Mexican and Colombian group that represents tropical music, mainly cumbia and Osmani García, remembered for the song ‘El Taxi’ with Pitbull.