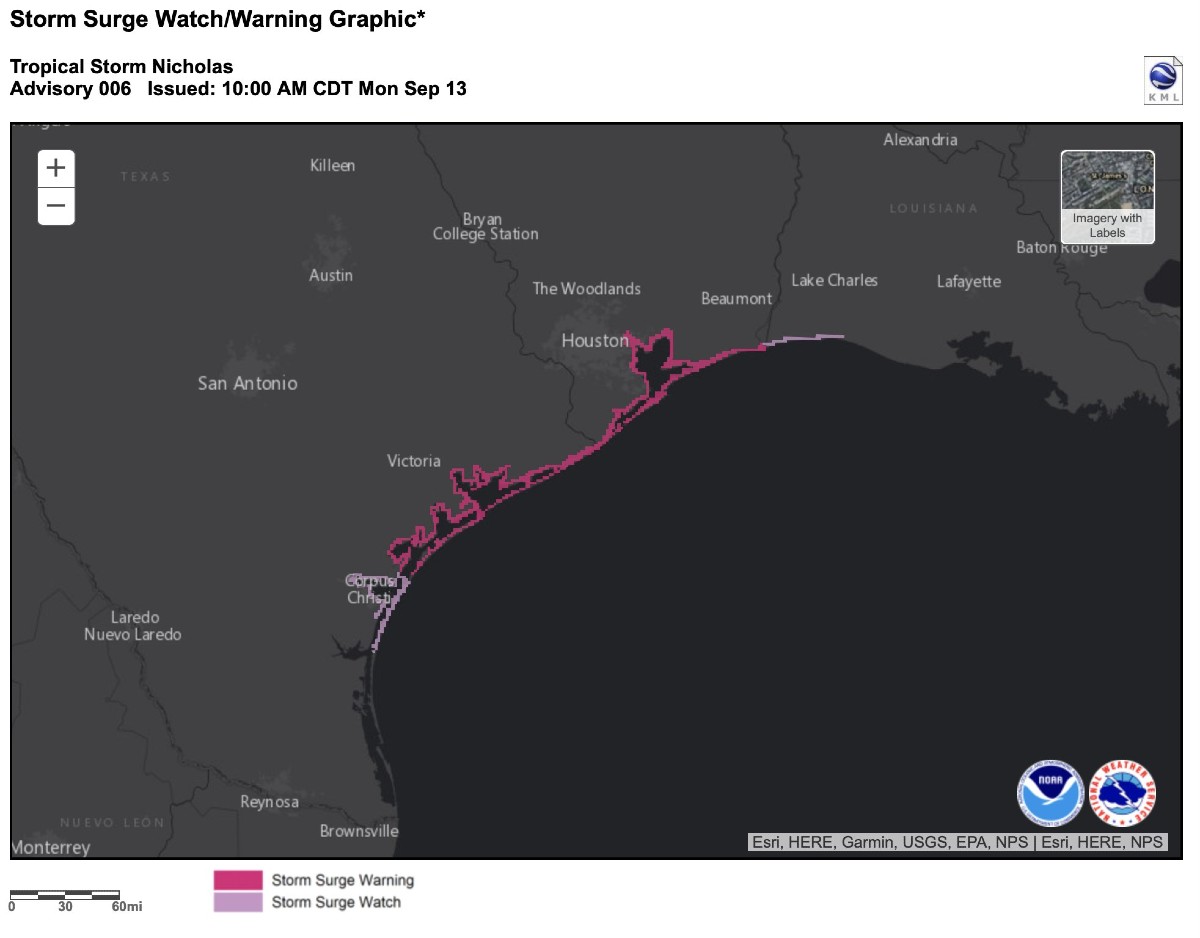 This Sunday, Tropical Storm Nicholas was moving through the Gulf of Mexico and is forecast to cause heavy rain and flooding on its way to the coasts of Texas, Louisiana and northeastern Mexico.

The rains that Nicholas will throw will be calculated between 13 and 15 centimeters (5 to 10 inches), as of this Sunday afternoon and some days of the week in Texas and Louisiana, according to the National Hurricane Center of the United States.

Likewise, the institution added that the Mexican state of Tamaulipas is approaching rainfall of between 5 and 13 centimeters (2 to 5 inches) between this Sunday and Monday.

Hurricane Watch means that hurricane conditions are likely within 48 hours of the watch being issued.

The flood risk for Nicholas remains in progress, with a Level 3 out of 4 risk of excessive rain issued for coastal sections of Texas from Monday through Tuesday night, according to the Weather Forecast Center.

“This brings the total of 48 hours for some areas to 9 to 12 inches (up to 30.5 centimeters), which could lead to significant flood problems, especially in urban areas such as the Houston metro,” explained the Center for Time prediction.

The areas from Corpus Christie, Texas, to the greater Houston area and parts of western Louisiana, including Lake Charles, are threatened with considerable flooding through Wednesday.

Louisiana is still recovering from the devastating passage of Storm Ida a few days ago, causing property damage and casualties.

Nicholas, the 14th named storm of the Atlantic hurricane season, formed in the Gulf of Mexico on Sunday.

The center of the storm would move across or near southern Texas between Monday and Tuesday in the upper parts of the coast.

On the other hand, heavy rains will be the main threat, and rainfall of up to 10 inches for southwestern Louisiana.

There is a danger of life-threatening storm surge from Tropical Storm #Nicholas along the Texas coast from Port Aransas to Sabine Pass where a Storm Surge Warning is in effect. Latest information is available at https://t.co/tW4KeGdBFb pic.twitter.com/iKBxOEKMv0

While on the middle and upper coast of Texas, the storm is expected to leave until 40.6 centimeterssaid the Center.