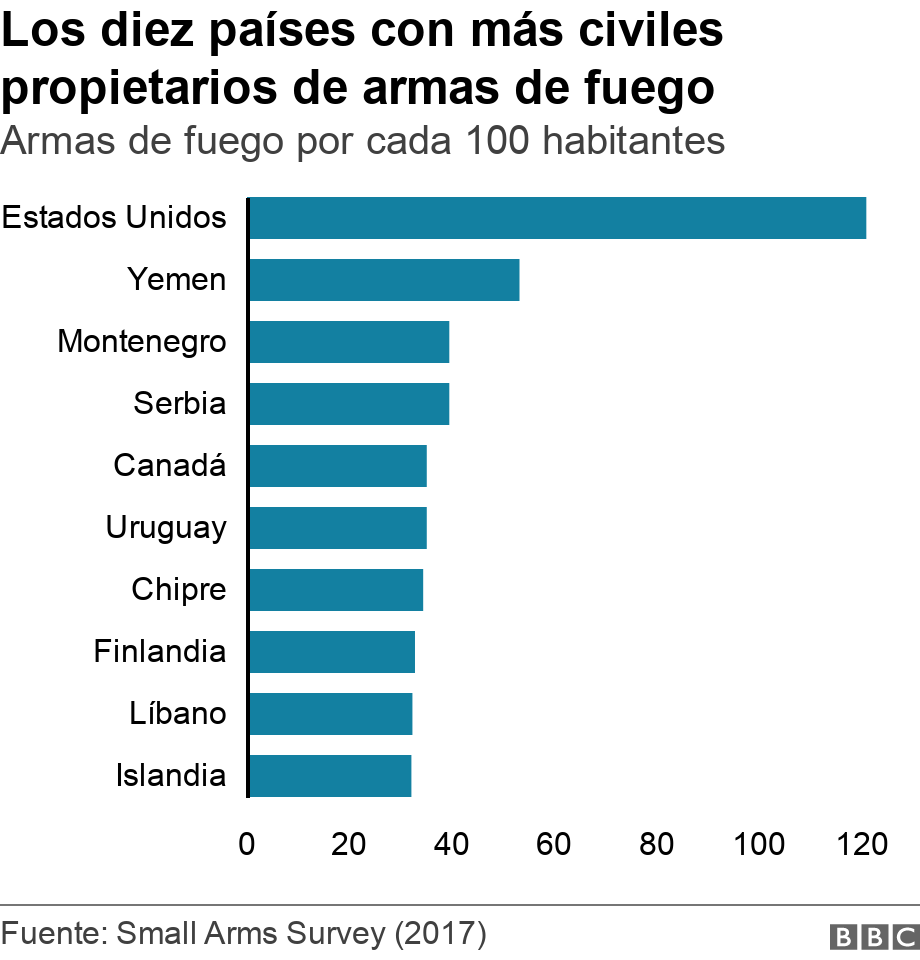 The shooting at an elementary school in Uvalde, Texas, has reignited the debate over gun control in the United States.

At least 19 children and two teachers died Tuesday at Robb Elementary School after an individual broke in and opened fire on students.

The 18-year-old suspect had a pistol, a semi-automatic rifle and high-capacity magazines, according to investigators. He is also accused of shooting his grandmother just before the massacre.

This massacre shows the impact of the gun culture that reigns in the US, a country dressed in mourning once again for a mass shooting at a school.

How many guns are there in America?

While it is difficult to estimate the number of firearms in private hands, figures from the Small Arms Survey, a Swiss-based research project, estimate that in 2018 there were about 390 million weapons in circulation.

The latest data released suggests that gun ownership has grown significantly in recent years. A study published by Annals of Internal Medicine in February revealed that 7.5 million American adults, just under 3% of the population, acquired a gun for the first time between January 2019 and April 2021.

This, in turn, exposed 11 million people to firearms in their homes, including 5 million children. About half of new gun owners in that period were women, while 40% were African American or Hispanic.

A separate study, published by the American Academy of Pediatrics in 2021, linked an increase in gun ownership during the pandemic with higher rates of gun injuries among children.

How many mass shootings are there in the US?

More shootings than days of the year. This is what has happened since 2019 in the United States according to the registry kept by the Gun Violence Archive (GVA), a non-profit organization that tracks armed violence in the country.

How many deaths are caused by firearms?

According to the US Centers for Disease Control and Prevention (CDC), a total of 45,222 people died from firearm-related injuries during 2020, the last year for which complete data is available.

And while mass shootings and gun murders generally get more media attention, 54% of all deaths were suicides, some 24,300 deaths.

A 2016 study published in the American Journal of Public Health found that there was a strong relationship between higher levels of gun ownership in a state and higher rates of firearm suicide, for both men and women.

How many gun murders are there in other countries?

Nearly 53 people are killed each day by a firearm in the US, according to data.

The figures also show that the vast majority of murders in the country, 79%, were carried out with firearms.

That’s a significantly higher proportion of homicides than is the case in Canada, Australia, England and Wales, and many other regions.

Are mass shootings getting deadlier?

The “mass shooting” deaths that draw international attention are harder to track.

The deadliest such attack, in Las Vegas in 2017, killed more than 50 people and injured 500. However, the vast majority of mass shootings leave fewer than 30 dead.

Despite widespread public outrage, US support for tougher gun laws in 2020 fell to the lowest level since 2014, according to a Gallup poll.

Some 52% of Americans surveyed said they wanted tougher gun laws, while 35% said they should stay the same.

11% of those surveyed said that the laws should be “less strict”.

Some restrictions on firearms are widely supported by all political stripes, such as limitations governing the sale of guns to people with mental illness or on “watch” lists.

Despite years of financial problems and internal conflict, the National Rifle Association (NRA) remains the most powerful gun lobby ANDANDUSA, with a substantial budget to influence members of Congress on gun policy.

During recent election cycles, the NRA and other organizations have spent fortunes on pro-gun messaging.